Somehow the Dallas Stars had Valeri Nichushkin fall into their laps at No. 10 in the NHL draft. They didn't hesitate to make their pick.

It played out as if in a dream.

The big focus on the 2013 NHL draft for the Dallas Stars was the need to acquire elite, blue-chip talent at the top of the first round. This is an organization that has spent the past four years completely rebuilding the prospect system under the leadership of Les Jackson and Joe Nieuwendyk, taking the Stars from one of the worst developmental systems in the NHL to one of the best.

Yet the Stars, for all of the improvement seen in the prospect pool, were without that one player that could really turn the tide of the organization. Every franchise needs strong and skilled players up and down the roster, and that's what the Stars have built through the draft since 2009, but have yet to find that transcendental talent that says this is an organization that is truly starting to turn things around after five years of being mired in mediocrity.

It seemed as though, however, an inspiring run by a young and rag-tag group of players at the end of last season seemed to make acquiring such a player much more difficult. The five-game winning streak moved the Stars up the draft board to No. 10, and suddenly the Stars had moved out of a spot where elite talent was expected to be sitting and were now on the outside looking in -- and trying to find a way to move back up.

His control in tight with the puck is unparalleled, and his ability to change direction and accelerate is absolutely incredible to behold. While his offense gets the most attention, Nichushkin is an adept and aggressive backchecker capable of playing great two-way hockey as well.

Endless trade-up scenarios were discussed and Stars general manager Jim Nill spoke on several occasions about attempting to move up -- yet the price was always absurdly high. This was still a very deep draft and the Stars were going to have good talent at No. 10, so even if that transcendental player was just a pipe dream, there was still great value for staying put with their pick.

Then Valeri Nichushkin quite literally fell right into their draft laps.

Nichushkin was considered to be one of the top talents in the draft this year, ranked as the No. 2 European skater and many feel he has a higher ceiling than Sasha Barkov, Elias Lindholm, and even some of the top players coming out of the CHL in Seth Jones and Jonathan Drouin. A hulking power forward, Nichushkin shows flashes of incredible strength on the puck and drives the net better than any other player in the draft.

His control in tight with the puck is unparalleled, and his ability to change direction and accelerate is absolutely incredible to behold. While his offense gets the most attention, Nichushkin is an adept and aggressive backchecker capable of playing great two-way hockey as well. This is an elite offensive talent who has also shown his willingness to drop back and block shots when needed, and while his goal scoring shows up the most on highlight reels he is also capable of moving the puck effectively to his teammates. Make no mistake, however -- this is a pure goal scorer of the highest level.

Starting with the junior team with Traktor Chelyabinsk, Nichushkin moved up to the men's league in the KHL and was a 17-year old playing in the second-toughest hockey league in the world. The numbers may seem uninspiring at first, but this was a kid amongst men while getting ten minutes a game. His role increased in the playoffs, however, and Nichushkin dominated nearly every international tournament in which he appeared.

So how did such a talent fall?

It seems that teams were indeed thrown off by the Russian sensation's desire to play in the NHL right away, along with the perceived threat he would bolt to the KHL if things didn't go his way. Nichushkin is certainly a confident hockey player, and there were reports that teams were thrown off by his attitude at the scouting combine.

"He shows up at the combine and acts very arrogantly and has terrible interviews and quits on a lot of the tests, and has a lot of teams saying, 'You know what? No thanks,'" said International Scouting Services head scout Ross MacLean.

Nichushkin, like many of the top picks in the draft, decided to forgo many of the physical tests at the combine -- although he did participate in the grueling bike test before cutting it short. Nichushkin said before the combine he didn't believe the tests were needed, and while many of the top draft picks seemed to agree it's clear that this negatively affected his reputation with some of the teams at the top of the draft.

One team that did pay close attention, however, was the Dallas Stars. The Stars were always prepared to move up in this draft for the right price, and they certainly did their due diligence with some of the players at the top should they become available. The Dallas Stars were prepared for the possibility of drafting Nichushkin and had an intense meeting with the Russian phenomenon the day before the draft that certainly seemed to go well for both the team and the player.

Get To Know the Dallas Stars 2013 Draft Class 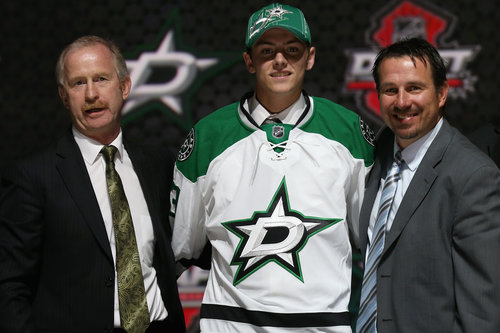 An in-depth look at the Dallas Stars latest prospects that were selected in the 2013 NHL Draft.

"We met the player [Saturday]," said Nill on Sunday. "We had a meeting with him, a one-on-one meeting. We had our management team in there and ownership team. We were just so impressed with the player that we knew it was something we couldn't pass on."

Nichushkin stated afterward that the meeting with the Stars was the best one he had had yet, and that being drafted by the Stars was something he was certainly wanting. For a player of this caliber, when you consider all of the underlying factors of his coming to North America and the NHL this season, having Nichushkin feeling enthusiastic about the Stars is just as important as the team being prepared for a different situation than you normally get with top draft picks.

There's a certain stigma attached to drafting players of this nature, a so-called "Russian factor" that teams need to consider. Players from Russia and the KHL have a different attitude, both on and off the ice, than players that have been through the Canadian and American hockey machines -- where their skills in interviews and personalities off the ice have been coached just as much as their actual play. There's also the KHL itself as a major factor, with young players always a threat to bolt for the big money back home should things not go how they planned.

Nikita Filatov was drafted No. 6 overall by the Columbus Blue Jackets in 2008 and struggled to adapt under disciplinarian Ken Hitchcock. He eventually was loaned to the KHL and after several stints in the NHL and AHL, and being traded to Ottawa, Filatov is back in Russia for good -- and had just six goals and 14 points in 53 career NHL games.

There's a risk involved, and it's a risk that Jim Nill and the Dallas Stars were willing to make. When you consider the talent involved, and how he slid right to the Stars, it was a situation where there really was no other choice. You don't pass on this sort of talent, even with the risks involved.

"Well, everybody knows him well," said Nill. "If he's not the best player, he's one of the best players in the draft. There's definitely the Russian factor but we're a very confident organization. I come from an organization in Detroit where it was never an issue for us and I know Dallas is the same way if you go back to the (Sergei) Zubov years. So, like I said, it got to a point in the draft where we were picking to pass up on a player like that we just couldn't do it. It's been a while since Dallas has drafted a player with that kind of upside and just something we couldn't pass on."

The concerns about Nichushkin's contract status in with Dynamo Moscow of the KHL -- the New York Yankees of Russia -- are not what they were once though. Nichushkin has said he has clearance to play right away in the NHL, and Jim Nill made it clear that they have talked with both the NHL and the KHL -- and Nishcushkin will be in North America right away.

The Dallas Stars, and Jim Nill in particular, are historically conservative when it comes to moving young players up to the NHL. Radek Faksa, who was supposedly NHL-ready when drafted last summer, will play two seasons in the OHL before he'll get a chance at the NHL roster -- and even then there are no guarantees. With Nichushkin, however, the situation is a bit different and his skill set and talent certainly make him able to play in the NHL right away, although the Stars will still be careful with his development the next few months.

"He's coming to our development camp," said Nill. "He's going to come over here. We plan on keeping him here in Dallas for the summer. We want him to get working on his English and get him acclimated. We're going to get him over here. Let's get him to go through training camp, go through Traverse City rookie tournaments. I want him to fully adjust. We've got to remember he's a 19-year-old kid. Something I've always preached is about patience and if he's ready, he's ready but we're going to be patient with him also."

Nichushkin, who was only able to do interviews on Sunday through a translator, will have his biggest challenge not on the ice but off of it. He'll be moving to Dallas right away; there are no plans for him to even go back to Russia, as he's headed to Texas from New Jersey immediately. His transition to North American is going to be just as tough as his transition to the NHL game, and the Stars will have to be careful with his development as the summer moves along and into the season.

The good news is that the Stars have a new player on the team that can be of help in that regard, with veteran defenseman Sergei Gonchar now signed for the next two seasons. Gonchar was instrumental in helping Evgeni Malkin transition to the NHL and he'll be leaned on as a mentor once again for a young and talented Russian player. This situation will be a bit different, however, as Malkin was already 20 years old when he finally made it to the NHL.

"Well, I think Sergei Gonchar's going to be a big, big part of Valeri Nichushkin's development," said Nill. "Sergei Gonchar's a high-end character guy. He's the guy that gets a lot of credit for improving (Evgeni)Malkin in Pittsburgh. The timing's worked out perfect. He's a great ambassador of the game and character guy. Now we have a young guy coming in that can learn from him, that's really a bonus for us."

The Stars will give him the tools he needs to make the NHL, but there are still no guarantees. Expectations will be exceptionally high for Nichushkin, almost immediately, and it's unknown how he'll react when things don't always go smoothly.

For all of the concerns, however, there still remains a player with incredible talent who should have rightly gone in the top three of the draft. His potential is through the roof and there's no telling what he'll become for the Dallas Stars in the coming years. For now, however, the Stars finally have that truly elite, game-changing and game-breaking talent they've so desperately needed.