A very detailed study of the draft success of "defensive" defensemen shows teams should be wary of selecting players that have not already shown some sort of offensive success at the CHL level prior to being drafted.

Every year in NHL draft there are many variables and unknowns that factor into how the first round will actually work out, one of those being just how many defensemen are drafted high or how many fall. Every year there are teams that seemingly go off the board to draft a defenseman higher than expected -- it happens with forwards as well, but it's more noticeable with defensemen -- and many times that defenseman that is drafted higher than expected falls into the "defensive" or "shutdown" type of blueliner.

Dylan McIlrath (No. 10 overall in 2010) and Jarred Tinordi (No. 22 overall in 2010). These two are very fine defensemen and certainly may turn out to be good at the NHL level, but these are examples of defensemen drafted high because of their size, their intangibles, their physical play, their shutdown ability or a combination of all of these traits. There's offensive upside for sure, but mostly these sorts of players have shown potential instead of actual offensive production when they are drafted.

What does history tell us, however, about the success teams have in drafting players that fall into this category? Luckily, we have a very good and very detailed study that looked what history tells us about defensemen that have been drafted who scored at less than a 0.5 points per game rate during their time in the Central Hockey League.

That's Offside has a very good look at this issue, and I wish I could just post the entire post into this one. At the very least, you should go and read the entire thing -- right now -- before reading further.

I'll hit on the highlights of what he uncovered.

This was his hypothesis before beginning the study:

My hypothesis was that to be a regular NHL defenseman, you probably had to be an outstanding player in the CHL at both ends of the ice. Consequently, guys drafted for their "defensive abilities" but couldn't score would make up the vast majority of early-round draft busts, at least when it came to defenders. I decided to use a 10-year window of drafts, with the most recent one I looked at being 2008. This gives the most recent batch of players I looked at five years to get acclimated to the NHL and start to stake a claim to a roster spot that they'll ideally hold down for years to come. I also stuck to the CHL for a couple of reasons: 1) it's the biggest feeder league of players to the NHL, and 2) it's probably the most familiar major junior league to me as well as any other Canadians (and certain Americans too) in terms of styles of play and levels of competition.

RJ defined that a player had become an "NHL regular" if they had appeared in 40% of the the NHL games for which they were eligible. An arbitrary number, but a fair one for the purposes of this exercise. He found that, almost overwhelmingly, players that scored less that 0.55 points per game in the CHL had a very, very low probability of ever becoming an NHL regular: 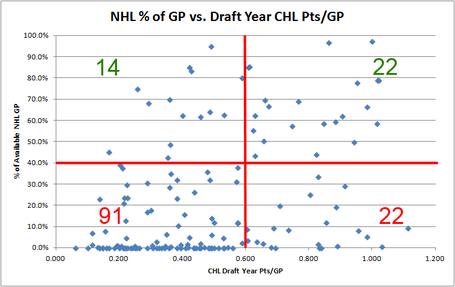 Based on historical data, a CHL defenseman taken early in the draft with fewer than 0.6 Pts/GP in his draft year, like Scott Harrington or Dylan McIlrath or Colten Teubert, only has about a 1 in 10 chance of even making the NHL as a full-time player. Going back to Harrington, only 3 players in the last 15 years have scored at a lower rate in their draft years and established themselves as NHL regulars: Mark Fistric, Tyler Myers, and Shea Weber. However, Fistric was never a big scorer and finds himself dangerously close to falling out of "NHL regular" status, while Weber and Myers grew into elite 19-year old scorers in their draft +2 seasons. Weber had 0.75 Pts/GP with Kelowna, and Myers put up an impressive 48 points in the NHL. Harrington still finds himself under 0.40 Pts/GP in his draft +2 season, which means he's tracking to be just like the other 91 guys who haven't ever made the show full-time.

There are outliers, of course.

Kris Letang, Marc Staal, Dion Phaneuf and Travis Hamonic all scored less than 0.5 Pts/GP yet still became elite-level defensemen in the NHL, although the latter three all showed significant offensive improvement at the junior level after being drafted.

There are also no guarantees: Ivan Vishnevskiy scored at a high level in the CHL and we know how that situation ended up. Danny Syvret is another similar example of a high-scoring defenseman not exactly working out.

There is also the danger of getting blindly by a breakout season offensively that later shows itself to be an obvious anomaly. Martin Vagner, drafted by the Dallas Stars at No. 26 overall in 2002, had 34 points in 64 games in his first season in the QMJHL during his draft year. For the remainder of his career, no matter at what level, Vagner never scored more than 18 points in a season and never came close to the NHL.

So what does this tell us about the defensemen slated to go in the first round this weekend?

Nikita Zadorov, Samuel Morin, Dillon Heatherington, Madison Bowey and Mirco Mueller all have the red flag of lower offensive production at the CHL level. These players will be drafted high based on their shutdown ability, their size and any number of other intangibles -- they're slated as potential top pairing defensemen based on defensive abilities, with their potential for offensive output slating them as possible two-way blueliners.

Zadarov is routinely rated near the top ten in this draft, yet scored at just a .397 Pts/GP so far in the CHL. Here is a good summary of his skills and potential, courtesy of Corey Pronman:

Zadorov is an elite physical player who possesses many tools for future success. He has a 6'5", 220-pound frame, and he is unusually strong for a player his age. He uses it to his advantage, as he loves to take the body and land highlight reel hits. He skates at an above-average to plus level, which is significant for a player at his size. He can close gaps remarkably well. The rest of his game is not as impressive, but he could be a fine puck mover and positional defender. Scouting sources have divided opinion on both of those fronts. He has improved as the OHL season has progressed. He shows ability to move the puck and make good reads in his own end, but his decision making is not always perfect. He possesses some offensive upside, but it is likely more in the average range.

Teams ready to draft players like Zadarov should be wary.