I've been meaning to add my 2 cents about the WC the past couple days, but work got in the way and those posts are stale by now, so... I'll make it a Fan Post. :)

Sir, I think I've got to agree with you. :) I've been going to games since day 1, and been a part of some really great moments, (that 1999 WCF Game 7 was intense!). Maybe one day, seeing the Stars hoist the Cup at home, in front of our crowd, maybe that'll eclipse everything else, but as of right now... that Winter Classic has to be the funnest, most exciting thing I have ever been a part of.

And to put it in perspective, I, for one, was not one of those that was particularly thrilled to get the game in the first place. "Ahh, that'll be cool!", suuuure. But... the NYE game has been a tradition for so long, a date night for my wife and I for 20 something years... the ice is usually terrible for outdoor games, makes for a sloppy game... what's the view going to be like? might as well be looking down from an airplane... what if the weather sucks?... and the crowd? 80,000+ people, oh boy, that's always fun!

But oh well, it is a once-in-a-lifetime event (probably?). What am I gonna do, not go?

So I pull the trigger, sign on at first opportunity, and get the max number of what-I-thought-would-be the best seats in the house (more on that later).

I'll admit, I was getting at little more amp'ed up as the game got closer, and the Holiday Spirit probably helped. Ok, let's do this, how bad could it be?

And then game day. OMG! Probably the most amazing thing I've been a part of!

First the meetup with a dozen or so close friends and family at the IHOP closest to the train station of choice, that was easily the best Holiday Party of the year. And then, the adventure that was the train ride - a thick mix of Stars and Perds fans, everybody festive, jovial, down right excited. I think the train levitated for at least half the journey!

And the crowds at the stadium! Sure, they were as bad as I expected them to be. But instead of being an oppressive, "get-me-outta-here" kind of way, it as more of a communal, "this is going to be one crazy big party" kinda way!

Anyway, that whole day was kinda like that. And things just built as the game went along. [Spoiler alert - we win!!]. I'll be honest, when we got down 0-2 so early in the game, I wasn't the least bit worried - I felt a crazy "ok, we've got 'em right where we want them" kind of feeling. And sure enough... :)

All-in-all, it was just awesome. It was far from a perfect day - many have whined, justifiably, about the lack of crowd management. I really wanted to go through the apparel shop, and I don't know, get some food (crazy, right?) and the lines were just way, way too long for that. And getting out? Via the train? OMGLMAF! (gawd my feet hurt by the end)

Our seats, too, gotta mention that. I'm thinking "ok, if we're going to go to this, I'm at least going to get the very best seats I can get". So... rows 9 & 10, dead center ice. Big mistake! lol! With the rink being somewhat elevated, it felt like we were on like row 2 or 3 at the AAC. And still being 20+ yards away from the benches, all we could see where the players from the waist up (angles, ask Marty). You actually want to see the ice? Impossible. During the game, trying to follow what was happening with the puck was impossible. It was fun just trying to guess what was happening based on player reactions, but really, the only way to watch the game was via the big screen, about 80 degrees to the left, around the enjoyable and thoroughly lubricated Stars fan that absolutely had to stand the whole game... oh my. In hindsight, I think the best seats in the house were probably first row of the upper deck!

Seriously, if I could make one recommendation to the league for future games, do some calculations... elevation of seat vs distance from ice, etc... if all you can see are the tops of the player's heads, do the fans a favor - don't sell those seats!. (I know, not sell seats? Right.)

And even then, despite all the negatives - the crowds, the lines, the waits, the view - it was still probably one of the most incredibly enjoyable events I've ever been to. The energy, the spectacle, the pig races and the mutton busting (that was great! little 5 year old kids clinging to a sheep for dear life bolting across the pen, hysterical!), the over-to-top Hee Haw theme ... the game. :)

As Tyler said, despite all the great moments over the last 20+ years, nothing holds a candle (so far) to the 2020 NHL Winter Classic. Well done NHL. Well done Stars. Well done Dallas. (and Nashville, thanks and well done, too! ;) 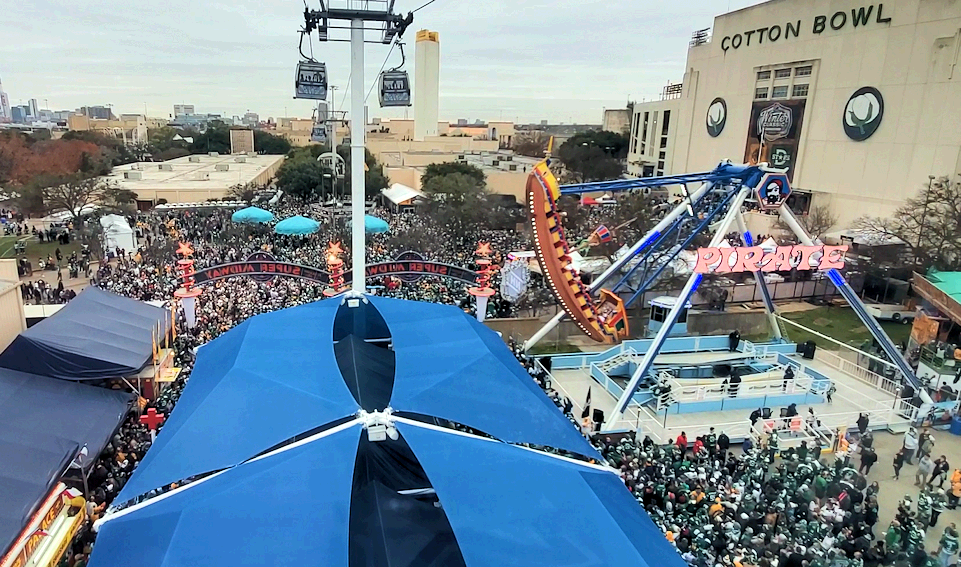