Not sure I really want to write this, but these past few days have got me feeling... weird. Conflicted, betrayed, it's-right-but-it's-wrong confused. Maybe public catharsis will help, I don't know...

First of all, Jim Lites, you're a <span class="spoiler">douche</span>. (well, that didn't work as intended! lol)

You're very good at making money, and that's why the Norm Green's and Tom Hick's and Tom Gaglardi's of the world love you, so more power to you. And if money is the true measuring stick of life I guess you've got one on me, so congrats. But you're still a douche. I don't hate you, but I sure wouldn't buy a used car from you, either.

Secondly, I could be wrong, but I'll say one of the things that's always made me proud to be fan of Dallas sports teams over the years is that, relative to some other sports towns (cough-cough-NE-couch-couch-Mich), win or lose, one thing that I think we've always had is a certain amount of... class? Generalities here, we have our share of a-holes, and there's been more than one occasion where I've been embarrassed by the words or antics of a fan or player or even owner (cough-cough-Jerry-cough-cough). But generally speaking, we don't boo Santa Clause. Or pelt players with snowballs, batteries, or whiskey bottles from the stands. Other teams don't have to warn opposing fans not to wear their team's jersey when they come to a game here, "it might not be safe". Maybe it's a southern hospitality thing, a "friendship state" vibe, maybe I'm completely wrong (and there's certainly plenty of exceptions), but even when we've been mired in mediocrity and incompetence, we've still maintained a certain level of professionalism. Of class.

Not saying what Lites said was at all "wrong". Leaders do have to lead, everyone has a job to do, everyone has to be held accountable, whether they're one of the top paid players in the league or on a ELC. And the lack of an honest effort doesn't go unnoticed. By the coaches, by the FO, by teammates, or by the fans. I get pissed off when I think somebody has an "off night", it doesn't matter if it's Jamie Benn or John Klingberg, Brett Richie or Kari f-ing Lethonen (love ya, Kari!).

But it happens, that's part of sports. Even our superheros are human. (Roger Staubach's last pass, not so great! lol) We learn from it, we strive to be better the next game. We get in people's faces when it's necessary, and we put our arm around 'em and lift 'em up when necessary, too.

We support each other. We don't tear 'em down in public. Family doesn't do that. "But it's a business!!", right? Sure, I guess so. But to some of us it's a family, too. And it's that kind of bond that it takes to clear the ultimate hurdles.

Tyler, I didn't think I was going to like you so much when you first arrived. Talented player, for sure, but "pretty boy"... "soft"... "tough enough"... ? Thank you for proving me wrong, you've become one of my top 10 Stars of all time. You're a warrior and a battler. Luck will come and go, but keep battling, keep doing your thing, I'm so glad you're on my team.

Jamie, you're in my top 3 (with Zubie and Jere). You can beat the opposition so many ways - with power, with finesse, with skill and deadly accuracy, or, quite literally, with your fists. We've never had a player quite like you, and when the game's on the line there's nobody else I'd rather have on the ice then you.

I’m not sure if there's something going on behind the scenes or what - maybe you're battling an injury, or if it's a relationship thing with a coach or significant other (it's a girl thing, isn't it?!? I knew it! lol ;) - but Lites is right, the Beastie Benn has been absent at times. Whatever it is, whatever it takes, I know you'll dig deep. You're a warrior. Don't play for Jim Lites. Don't play for Gaglardi. Play for your teammates. Play for the fans. :)

Shifting gears... as a STH, we sometimes have opportunities to get players autographs, and last year's 25th Anniversary got me thinking... I've gotten enough jerseys and hats and banners and pennants signed over the years, what can I do to make the 25th anniversary special? So I had a plaque made, and I've tried to get as many Stars people - players, coaches, past and present, even got Ralph and Razor - to sign. My celebration of 25 years of "All Things Dallas Stars", if you will.

I got a lot of sig's last year - Tyler, Rads, Bish, I got Jere and some of the first year guys, too - but there's still quite a few I didn't get, either. So this year I asked our account rep, as part of our STH gift, if she could get it in front of the team and maybe get some of the ones I'm missing. I dropped it off at the Stars office on Friday, of all days, and that will hopefully be happening later this week. Jamie, I'd be honored to finally get yours, if you don't mind. Big and bold, if you please! :) And Monty and Stu and Marty and Bobby Bassen if you're around, and Miro, and Roupe, and Guri, and Steven Johns, I missed yours last year, too, you're part of the team!

And Mr. Lites, if you wanted to sign as well I'd love that, too.

Cheers all, have a Safe and Happy New Year, Go STARS! 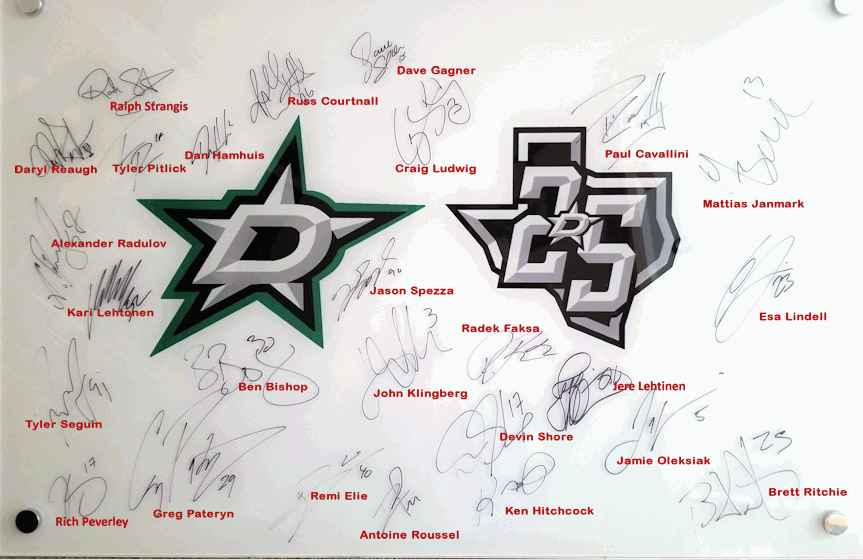