The first three months of the 18-19 season have not been kind to Julius Honka. While he was likely relieved and hopeful when Hitch was fired and Monty hired, he still ended up a healthy scratch on opening night and has been a healthy scratch in 13 of the Stars last 16 games. He appears to be following the career path of recent Stars D graduates Patrik Nemeth, whom we kindly donated to the Avs to help with their turnaround, and Jamie Oleksiak, who has provided Pittsburgh 25 points in 79 regular season games in exchange for a conditional fourth rounder. I suppose young Julius is eager to move on to his forever home, complete with playing time and playoff games. But as a Stars fan, I see some of the ripple effects from playing players with no long-term future but decent stats in lieu of players we took in the first or second round.

I find myself asking questions about some of the players we gave up on who instantly contributed in their new environment. For example, if we had properly developed Patrik Nemeth, do we trade for Marc Methot? If not, do we use that unallocated salary on a top 6 forward? If we had developed Oleksiak, does that make it easier for Nill pull the trigger on an offer for Honka when he had value? Is the idea of a large defenseman with a scoring touch enticing enough to Ottawa to eventually trade Karlsson to Dallas? Or does it make it easier to acquire an available forward like Skinner? Going further back, if we don't ask the Pens to take Niskanen, could we have turned his game around and leveraged him for an actual return, or even kept him and used his 30 points from the back end to get on the good side of the playoff bubble in those years we barely missed?

When thinking about moving on from Honka, especially if the return is going to be as low as it was for Nemeth and Oleksiak, I wonder what we're giving up. This year, his 4 points have been widely cited, as were his 4 points last year, as his marginal impact on the game. I devoted a lot of effort last season to attempt to link his puck moving with our dramatically improved record with him in the lineup. This year, with Heiskanen and even Carrick also able to move the puck out of the D own zone, his presence in the lineup has not been the difference between a win and a loss. His possession stats have been poor. His shot quality stats have been average. His confidence had appeared to be shot, but he has shown flashes of being a player who contributes offense to a team starved for goals. Julius Honka is not going to be a magic bullet who will turn their season around. But, I'm not sure his presence in the lineup will torpedo their season.

So, what do we know about the on-ice results with Honka in the lineup? 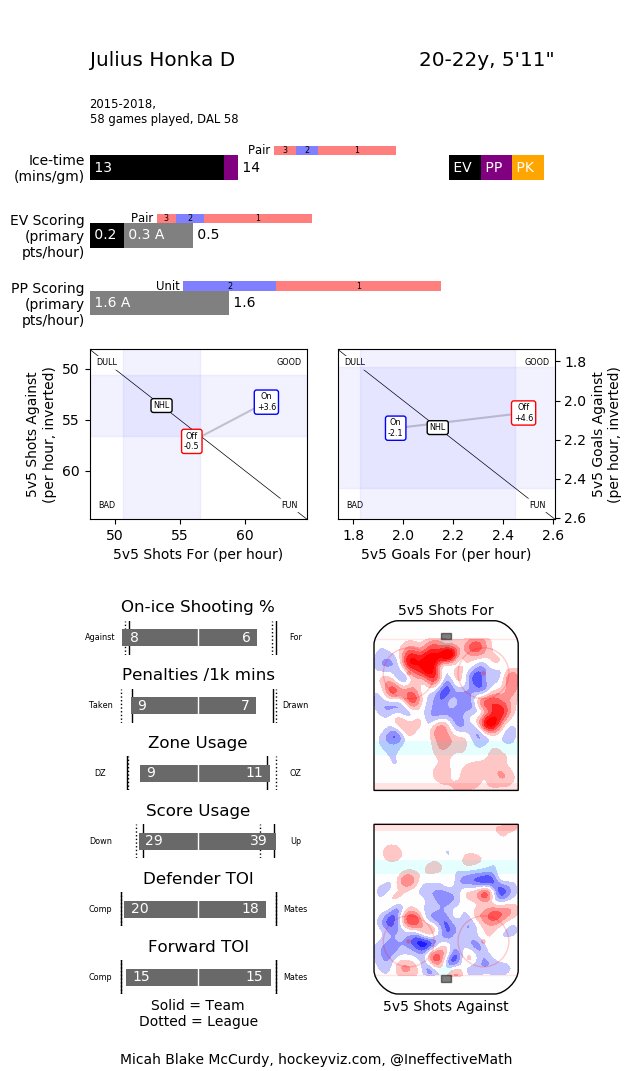 The above graphic, from HockeyViz, is a graphical representation of his first two seasons as a Dallas Star. It shows us a lot of what we already know about him: his possession stats are much better than the rest of the team, but his even strength plus-minus is worse. Technically, his points rates at even strength and on the power play are that of a second pair D who plays on the second PP unit, but his low minutes only resulted in 9 points his first two seasons. When isolating his impact in the offensive zone, he fires shots from the point, and helps generate high danger chances. Surprisingly, his impact in the defensive zone is negligible. Generally speaking, he allowed fewer shots, but all things considered, this shot chart does not appear to be one of someone who is a significant defensive liability on the ice. That said, with the low shots against, perhaps the chances allowed tend to stand out, particularly when they end up in the back of the net.

But that was over his past two seasons. This year, his impact has been much smaller: 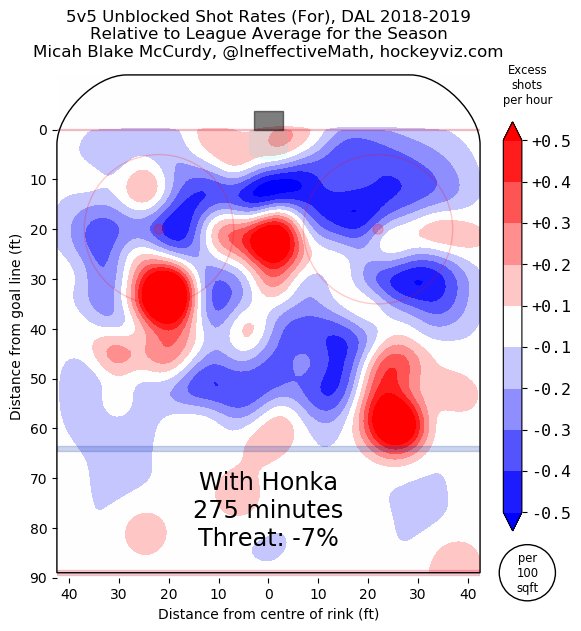 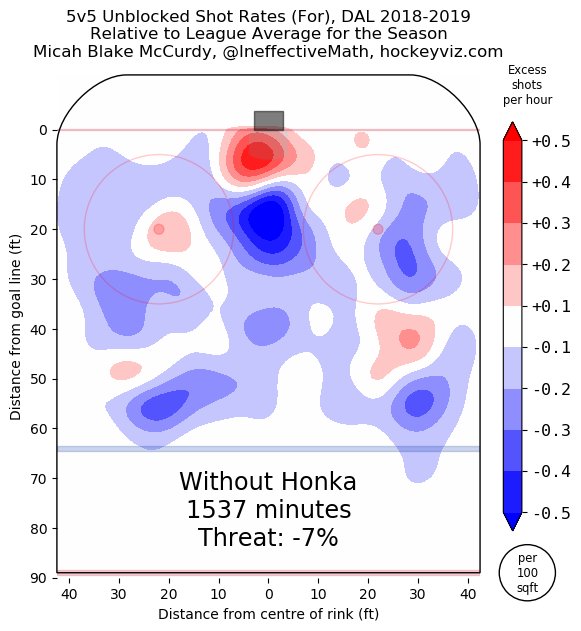 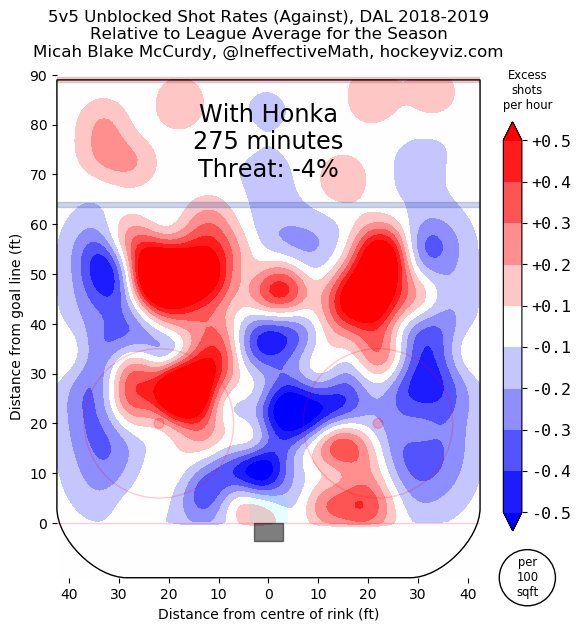 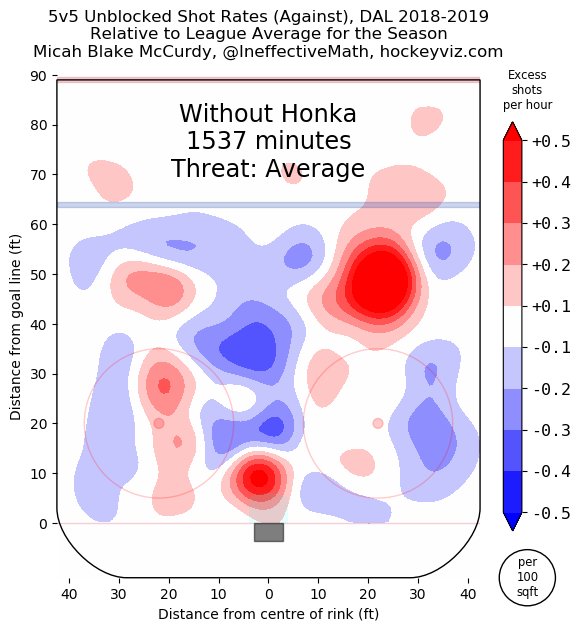 Defensively, the points have been a shooting gallery with him on the ice, but the high danger area has been relatively closed to the opposition, so technically the Stars are allowing slightly more quality shots without Honka on the ice as opposed to with him on the ice. As seen earlier, his shot quality given up is not nearly as bad as his reputation makes him out to be.

One interesting effect has been the effect of being partnered with Roman Polak, most likely because of easier competition when paired with Honka. 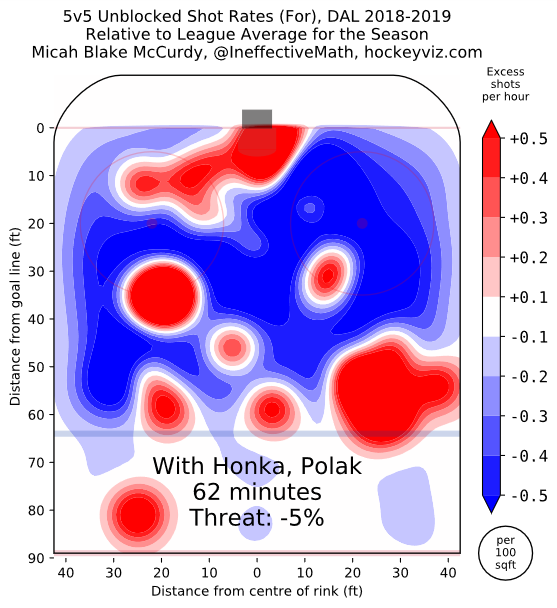 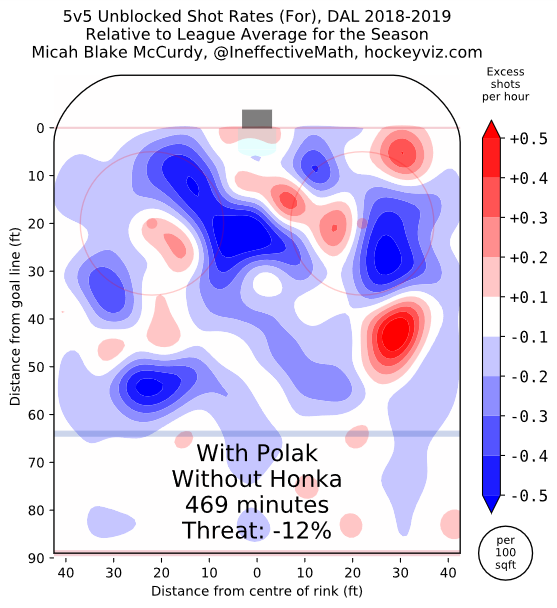 In the hour they were paired together, the shot totals are quote low (the sea of blue on the left), although the number of high danger chances gave them significantly more "threat" than when Polak has been with anyone else. Indeed, without Honka, the quality chances have been very poor with Polak on the ice. Ideally, Polak would have reduced quality against as well. 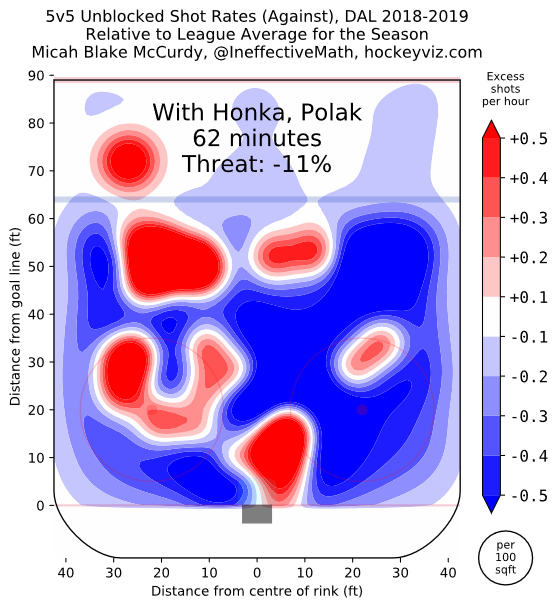 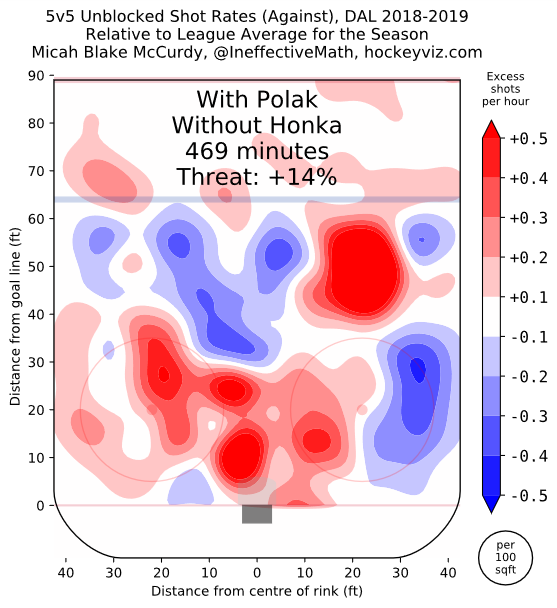 Unfortunately, that's not the case. When Polak and Honka were paired together, the quantities were low, so although there were a number of shots from in tight, the overall threat was low. Without Honka, the home plate scoring area has been a shooting gallery with Polak on the ice, and the quality of the shots against is significantly higher than league average. In my opinion, a defensive defenseman who can't limit the shot quality is similar to an offense-first defenseman who can't generate offense.

Honkanen is also an interesting pairing: 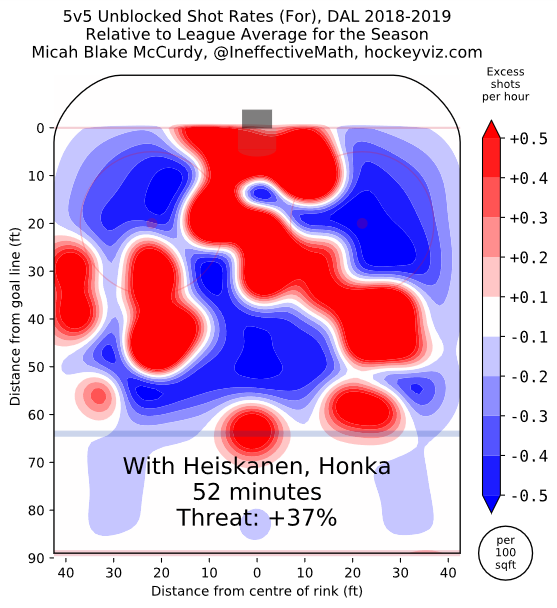 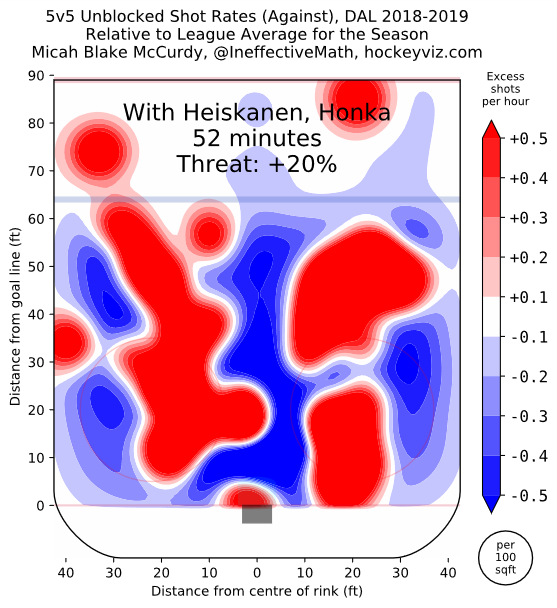 If you want to know how to get the Stars playing Ruff hockey again, all they need to do is pair 2 young D with under a season of experience each and give them top 4 minutes. Those charts scream "OFFENSE!!!! GOALS AGAINST (though fewer)!!!" Monty won't go with that pairing because he doesn't want a heart attack, but boy would that make Stars hockey fun again.

As for comparison to all the D,

The table above lists a variety of 5v5 stats, sorted by xGF%. Hanley and Fedun are ranked high because of high xGF, which hasn't resulted in increased GF, as well as reduced GA, which has been realized. The rest of our D are all below 50% CF%, but Honka, Klingberg, Hanley, Fedun, and a few games of Heatherington are the Stars D who would be expected to be positive goal differential players at 5v5. Most of our minutes have been going to Polak, Lindell, and Heiskanen and they are struggling with both possession and quality (Polak is benefitting from a D-leading PDO of 1011 and is a prime candidate to regress to a more negative goal differential). Honka's Corsi is not good, but Monty has indicated he doesn't look at shot counts, and it's on par with Heiskanen and higher than Lindell and Polak,. Likewise, his xGA is 3rd lowest on the team, which is tied with Carrick, who also has allowed a lot more goals than expected.

One important caveat is quality of competition and zone starts. Honka, Fedun, Hanley, Carrick, Heatherington, and Bayreuther have all been sheltered with regards to competition, but Honka does have one of the higher offensive zone deployments, particularly compared to Hanley or Bay.

In terms of point production, his 4 points is equal to last year, but lower than you'd like. However, he's been a victim of being given no rope on the PP, meaning he has around 12 minutes of PP time, and has one of the lower average time on ices per game, and has eaten a fair number of healthy scratches. I had mentioned that Honka has the highest primary point rate of all D with more than 100 minutes. All D are here:

You can't really say Honka hasn't produced, because he has in the minutes he has been given: he has the 3rd most primary points at even strength despite having the 6th highest time on ice.

Finally, a look at D-pairs that have had at least 50 minutes together:

Just some trends, but Hanley and Honka seem to be a part of higher xGF pairs (Esa-Honka is the exception). For some reason the Stars don't enough penalties with Heiskanen on the ice, either. Esa is struggling hard with Klingberg, and Polak has been a part of our two worst pairings.

Long story short, I'd have a hard time making a case that Julius Honka has been bad enough to justify being thrown to the wayside. I'm concerned he's a victim of confirmation bias. If you look for Honka's mistakes, you'll find them. But if you actually look for them with the other D, you'll find them as well. There's always concern about falling for the sunk cost fallacy, but he's a player whose ceiling is higher than many of the players who he's sitting for, and who most certainly would actually play a role in the future with the team if developed properly. At the very least, it would be nice if those in charge of prospect evaluation would identify cases like this before the value was reduced. I don't know what Nill is being offered, but I'd imagine other GMs are trying to lowball him.

Personally, I'd like to see us actually develop one of our higher-ceiling first rounders, especially if not doing so also coincides with this low-event hockey we've been subjected to lately. The data suggests our struggles with mediocrity are not with the third pair, but with the other two, and that's where the emphasis for turning the season around should be. I don't envy Monty, but I'd like to see what a 6 man D-corps of Esa, Kling, Miro, Honka, Bay, and Fedun would look like now that Klingberg is back. I'd imagine a D with that many PMD's, combined with a more aggressive strategy following controlled zone entries would result in better possession and more goals for (there's a spike in goals scored within a few seconds of controlled zone entries, so try to take advantage of defenses that haven't gotten set up yet). But what do I know? I'm just a fan.