What's wrong with this thing?

The Dallas Stars might not end up in the playoffs this season and it will be because of two particular reasons -- goaltending and a hapless power play. For a team with so much talent on the forward lines and despite the inefficiencies on defense such a reason to miss the postseason would be frustrating indeed, especially when logic says that the power play in particular should be so much better.

The Stars are the fourth-highest scoring team overall and the highest scoring team at even strength in the NHL, by far. The power play, however, is just 26th in the NHL at a whopping 15.6% success rate and -- more recently -- has become the difference maker in a negative way in close games. These were contests in which the Stars walk away saying "we were the better team, but came up short" and yet were 0-for-7 or 0-for-6 on the power play in a game that one goal was the difference.

The same occurred on Tuesday night against the Montreal Canadiens, when the Stars very nearly squandered a very lengthy 5-on-3 and then just under four minutes of unending power play time. The two-man advantage wasn't particularly effective and it wasn't until a hard-charging and great individual effort by Tyler Seguin did the Stars finally get a puck past Carey Price.

That goal, the only power play goal scored by the Stars in another one-goal loss, was the perfect example of how the Stars have struggled so much on the power play this season.

The initial reaction is that the Stars need to shoot the puck more, to get the puck on net at a higher rate and eventually the goals will start coming. However, actual shots on goal are not a clear indicator of actual success on the power play -- the Lightning have considerably less shots on the power play with more opportunities than the Stars, but have a 18.1% success rate compared to the Stars. On the other side of the coin, the Wild have 65 more shots on the PP with ten less opportunities and yet have nearly the same amount of goals (25) and percentage (15.5) as the Stars.

What makes the great power plays in the NHL effective is not just volume of pucks on net but more specifically movement of the players once the power play is set up, and how quickly the puck is moved once received off the pass.

The Stars have scored a few goals on the power play of late, and have actually done well in their mission to puck more shots on goal. However most goals scored on the man-advantage for the Stars have essentially come off the rush and use the speed and quick movement the Stars do so well -- it's when the play is slowed down, and it becomes essentially a "half-court" offense, is when the Dallas Stars lose their mojo.

Dallas is a team that loves to use speed and aggression on the forecheck to create offensive chances and overwhelm the opposition's defense again and again and again. They do this very well, and in turn have scored more even-strength goals per game than any team in the NHL. When it comes to the power play, however, all of thos elements disappear entirely -- the speed and aggression is replaced by timidity and slow movement.

Compare the movement of the puck and players on these actual power play goals, and then a typical set up and power play "shot" by the Stars:

All three goals were essentially scored off the rush and by the Stars using aggressive puck movement to open up space in a man-advantage situation.

The problem arises when the Stars are then forced to get set up:

What you're seeing above is the typical setup of the Dallas Stars power play, essentially an "umbrella" formation that relies more on puck movement and the players staying in a particular "zone" than it does on actual player movement -- and therein lies the problem.

When the Stars get set up in formation they are usually looking for either a set play (the high-slot tip) or to find either Seguin or Benn alone in one of the "hot" zones that sit at the bottom of  the circle. They have also started working the puck high and getting shots from the point, and while that has resulted in a high amount of shot attempts the amount of shots getting blocked or sent wide has remained rather significant.

This is because the lack of player movement results in both the penalty kill being able to play aggressive on the points, and because the actual power play strategy and formation of the Stars essentially creates one-on-one situations with the puck-carrier essentially becoming a quarterback -- with everyone just watching him.

You can see that in the video above, as well as in these screenshots below as we break down a good example of why this strategy is failing:

Here, you can see the Stars set up in the "umbrella" formation, with Cody Eakin down low, Tyler Seguin, Jason Spezza and Jamie Benn set up across the middle and the defensman -- Alex Goligoski -- up high. The optimal play in this case would be to pass it back to Goligoski or even across to Seguin, and quickly.

Instead, Benn taps the puck down low and creates a battle on the boards between Cody Eakin and Zdeno Chara; perhaps not the ideal matchup for Dallas. You can see the positioning of the Stars forwards as Eakin gets the puck and works to move it behind the net. While Seguin appears open it is actually Goligoski as the lone uncovered player for Dallas, and the Bruins are happy to allow a one-on-one battle between Chara and Eakin.

Eakin actually wins the battle with Chara and moves from behind the net with the puck. You can see that the forwards have essentially maintained positioning, and the Bruins have now collapsed down low as Seguin readies for the pass.

If Eakin had been able to quickly move the puck out front here, the play would have worked. Yet the second issue with the Stars power play shows itself -- the players taking just one split-second too long to either move or shoot the puck. This delay allows defenders to get into shooting and passing lanes or in this case, get across to break up the shot from a wide open Seguin:

This play, like so many in the Stars recent history, resulted in a shot attempt but no actual shot on goal. The forwards went to their spots and essentially stayed there in anticipation of the overall set up, and relied upon a one-on-one battle to open up a scoring chance.

This is not how you effectively take advantage of what the extra space of the power play is supposed to afford you to do, and it speaks to overall philosophy and coaching rather than the actual talent on the ice. The Stars are being told to puck more pucks on net and that's a great start but none of that matters if they are unable to efficiently move the puck and open up the defense and more importantly -- get the goaltender moving laterally.

Chris Lewis (@CJL2012) had an excellent FanPost that broke down the philosophies behind the power play and the issues associated with why the Stars are struggling. I'll clip just a bit of here:

The goal in the movement of every power play is to pull the defenders into playing man coverage so that they end up neglecting a part of their assigned zone, leaving the power play with an open passing lane, which becomes an A-grade opportunity on the goalie.

Unfortunately, the Stars largely try to do this almost exclusively with passing and with minimal player movement. In effect, the Stars power play (and most in the league, tbh) end up playing what you could call a zone offense, which I have diagramed below including all the set spots from both Dallas PP formations. Many teams use similar formations, but the most effective are those that have the most movement by individuals within these designated zones, and the elite power plays look more like a system of interchangeable parts as plays swap zones regularly. I'll get to why a little later. 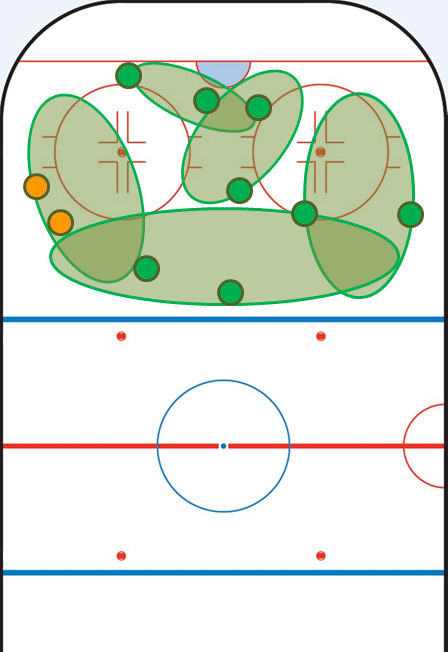 To understand why the Stars are largely ineffective, let's now examine typical PK defensive zone coverage. As I mentioned before, the PK is forced into a zone coverage style defensive simply by the nature of what a power play is. The lack of man power also means that defenders will be less aggressive the further away or worse the angle from the net. PKers generally will not go after a "50/50" puck like they would at even strength. The result is a zone scheme that prioritizes covering the middle of the ice and reasonable shooting lanes much more that attacking to create turn overs. Below, I show the average zone, and then also overlay it on top of the Stars offensive zone scheme to illustrate why the Stars generally cannot create PP opportunities. 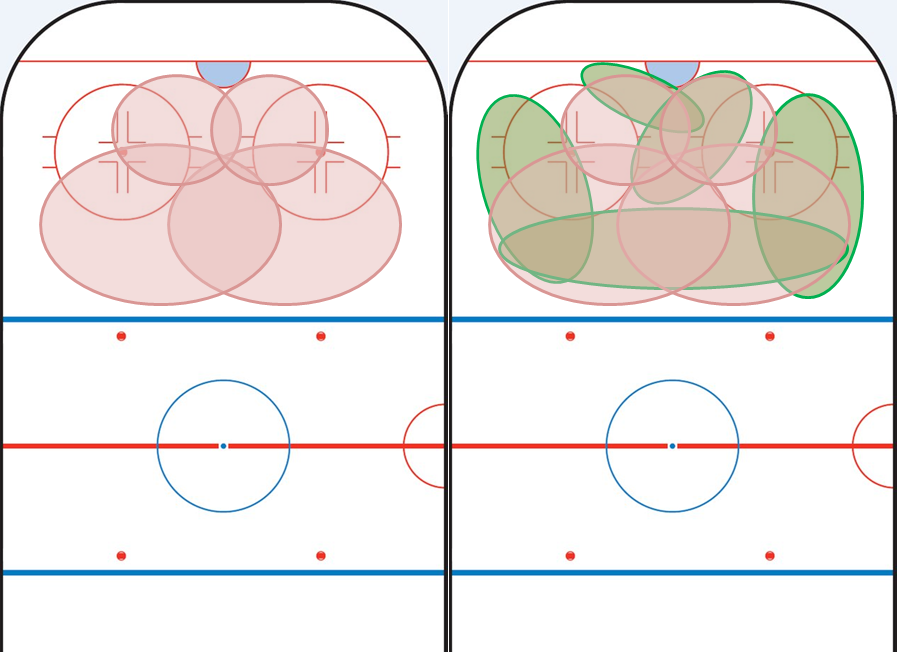 As we can see, the Stars zone is pretty much covered by the defensive coverage. The only real exceptions are the wide angles along the walls, which are generally considered non-threat areas. As a side note, that's probably why players like Seguin, Ovechkin, and Stamkos are able to get shots from the same area, power play after power play, year after year. Because they are elite shooters, they are dangerous from an area that most players wouldn't be, while the defenders still have to respect the rest of the offensive players that are hanging out in the "real" scoring areas.

When the Stars sit in this umbrella formation, they allow the defense the opportunity to not let the big passes get through, to get into the lanes on shots from the point and while every now and then they'll get a puck through on a rush -- the power play is essentially kryptonite to the Stars' offense when the power play tries to get going.

Cyle the puck one way, move in the other.

Get the puck off the stick quickly after receiving it -- get the puck moving not just back and forth -- get it moving laterally and get the goaltending moving. Create not just chaos in front of the net, but find a way to allow those shots from the point to open up.

This isn't an issue of who should be on the power play and who should be on what unit -- this is about scheme and philosophy and right now, the Dallas Stars methods are not working. If this team has any hopes at all of making this postseason, this must change -- and soon.