There's a few other good players on this team, too, ya know....

it was quite the scrum this morning. @ American Airlines Center http://t.co/rDqPVcnOP2

PS Boston is in town. pic.twitter.com/SOboUS9B8X

The Boston Bruins are in town, and the focus on Tyler Seguin is at its absolute peak. The Bruins have once again traded away a player that turns out to be incredible scoring machine, and now that Seguin is in a race to be the scoring leader of the entire NHL -- that focus is even more pronounced, as the Bahhstan media laments the loss a player they apparently couldn't wait to run out of town. 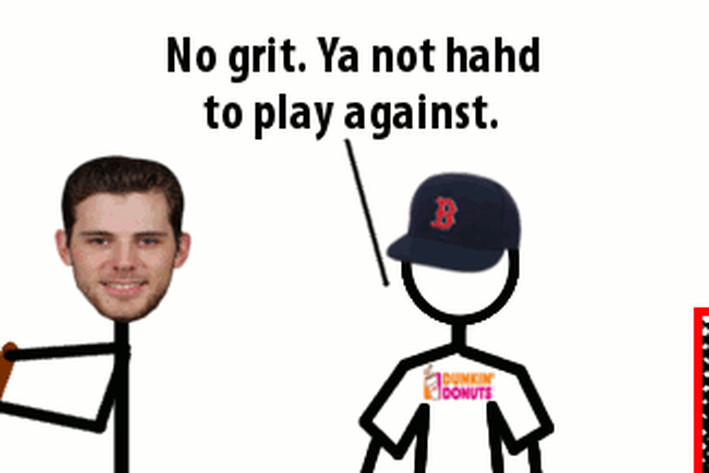 Our friends at Cup of Chowder with amazing cartoon about Boston's feelings toward's Seguin the past two seasons.

The games between these two teams are already supercharged and incredibly entertaining, and with the Stars facing the possibly of heading into the All-Star break on a high note and just a few points out of a playoff spot -- you better believe this one will have even more jump than normal.

That Seguin is facing his old team, with all the attention that once again comes with that --- makes it all the more entertaining.

Let's take a run down of some of the interesting Tyler Seguin stories out there so far.

Dan Rosen of NHL.com has a very excellent and detailed feature on the NHL's leading scorer -- this Magnum Opus comes in just under 2,300 words and runs down Seguin's path to this point in his career.

Benn, who was a center before Seguin arrived, has moved back to his natural position at left wing and become one of the best forwards in the NHL. He had 79 points in 81 games last season and has 40 points in 45 games this season.

"He's allowed me to become the best player I can be," Benn said.

Seguin, a right wing in Boston because of Bergeron and David Krejci, was able to move to the middle to play with Benn. He had 84 points last season and is on pace for 51 goals and 94 points this season.

"I think we both help each other," Seguin said. "We push each other.

While Seguin has had success in Dallas, the Bruins don't know if he would have enjoyed such a rise into the NHL's elite if he had stayed in Boston -- especially since the Stars are fighting for the playoffs, and that is really all that matters...

In fact, it seems that David Krejci isn't a really big fan of Seguin and his "big numbers." See -- the Bruins are all about sacrificing their individual stats at the expense of team success, and Seguin isn't like that and he isn't Pavel Datsyuk and.....

"Who knows how it would have gone if he'd stayed in Boston?," David Krejci said Monday, before the Bruins flew to Dallas to face the Stars on Tuesday. "We play a little different style of hockey. But if he's happy or not, I'm not sure. He must be happy on the one side because he's up there in the scoring race, but on the other hand, at the end of the day you want to accomplish something as a team. That's why you play the game.

"If they can't put themselves in position, then I'm not sure he's going to be that happy in the summer. There's a lot of games left, so any team can make a run."

"It's always difficult to play against a guy like (Seguin), but for example Datsyuk is a tough guy to play against because he plays on both sides of the ice," Krejci said. "That's the thing, you always have to be aware of both ends of the ice. Guys like that, it's really tough to play against, (Datsyuk) and Bergy. I'm really lucky to have Bergy on my side."

No one tell Krejci that if the Stars win tonight, then Dallas has just three points less than Boston -- and with one less game played. Also, no one tell Krejci the Bruins are in their own fight for the playoffs, seeing that they sit in the final Eastern Conference wild card spot...

Joe Haggerty of CSNNE repeats the same mantra-- great for Seguin, but HEY the Stars are horrible defensively and sit just outside the playoff race right now so who gives a rip about his stats? The Boston Bruins are a true TEAM and they just sacrifice so much in the pursuit of the TEAM game and they are so great and.....blah, blah, blah...

Krejci and Bergeron sacrifice offense to play hockey at both ends of the ice, and leap into the battle with a courage that's required for good fortune in the playoffs. Seguin has two goals in his last 28 playoff appearances, and couldn't make a dent in last year's first round playoff series vs. the heavy, physical Ducks.

The 22-year-old certainly wouldn't be on a pace for 51 goals and 95 points were he still with the Bruins in their tried and true system, and that's just the plain, honest, homespun truth.

This season he leads the league in goals and has just a plus-2 for one of the worst defensive teams in the league, and looks like he won't even have to worry about powering up for this year's playoffs. That makes some of his former B's teammates wonder how happy he is scrounging around at the bottom of the Western Conference with the likes of Edmonton and Arizona.

Finally....PLAY THE DALLAS STARS EDITION OF BOSTON BRUINS BINGO!! This is amazing.

As far a the actual game goes, the Dallas Stars are rolling with the exact same lineup as they did this past weekend. Although Patrick Eaves is well enough for McKenzie to head back to Cedar Park, he'll remain a healthy scratch along with defenseman David Schlemko.