The Stars current salary cap picture in a nutshell: So many numbers, so much money, and so much math.

The Dallas Stars took care of one of their two remaining restricted free agents yesterday when they signed center Cody Eakin to a two year deal with a cap hit of 1.9 million dollars. The other restricted free agent, sturdy defender Brenden Dillon, remains unsigned. The Stars still don't know, or at least haven't publicly acknowledged, what is going to happen with Rich Peverley for the 2015 season.

So, how does that salary cap look today?

Most of the information comes from CapGeek.

The forward corps is the group that underwent the most recent significant change. It appears fairly set unless a prospect pushes his way onto the roster. 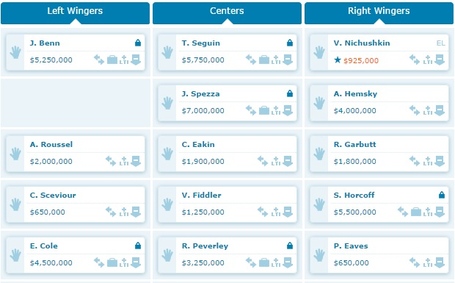 I put Erik Cole at the bottom because we don't fully know where he slots in yet, but at this point we can probably pencil him in the blank beside Jason Spezza and Ales Hemsky.

Curtis McKenzie, Brett Ritchie, and Radek Faksa are still on the outside looking in. All three have been good this preseason. You can make a good argument that all three are better than several players at the bottom of the roster at present.

McKenzie, in particular, has continued to build on his fantastic rookie season in the AHL. He still looks every bit the part of a good NHLer, but where does he fit in? He could safely take the roster spot of Patrick Eaves, but are the Stars going to carry McKenzie on the roster without giving him consistent playing time? Are they going to put Cole or Shawn Horcoff on the bench? Does Colton Sceviour stay as a scratch with McKenzie in the lineup?

None of the scenarios seem likely out of the gate. Depending on what happens with Peverley the Stars will have one opening on the roster, but not one that you would really want to fill with a prospect. If anything, Peverley moving to LTIR seems to open a spot for Travis Morin if the Stars are concerned about getting prospects consistent playing time in Austin.

The defensive end is a little more cut and dried.

Kari Lehtonen and Anders Lindback are going to be the goalie tandem. The six defensemen pictured appear to be the six the Stars will go with plus Dillon when he signs.

Jyrki Jokipakka, John Klingberg, and Jamie Oleksiak are on the outside looking in here. Jokipakka has had by far the best camp of the three. He would seem to be the next guy up if the Stars need another body. If Dillon remains unsigned Jokipakka could break camp on the roster.

For any number of reasons we can expect Dillon to be under contract when the season begins. The Stars leverage stems from the idea that they have the depth to replace Dillon. Jokipakka has played well, but the Stars don't have a player on the roster who can easily soak up the minutes Dillon plays. The Stars also need Dillon signed to get the maximum recaptured salary cap space possible in the increasingly likely event that Peverley isn't able to play.

Yes, Dillon is tied to Peverley. This is because of the long term injured reserve provision of the CBA which provides relief for teams in the event that a player is going to miss a significant chunk of a season. I'll let CapGeek explain the scenario that applies most appropriately to the Stars.

The Stars have the ability to add 3,250,000 dollars to their salary cap by putting Peverley on LTIR if he is going to be unable to play, but to gain the full amount they need to be as close to the upper limit of the salary cap as possible on the day they submit their 23 man roster to the NHL with Peverley on the roster.

The Stars are roughly 2,703,333 under the upper limit with an open roster spot and Dillon unsigned. If the Stars can sign Dillon to a contract with a cap hit of 2,703,333 they would be right at the upper limit. They would then submit a roster with Peverley on LTIR to add 3,250,000 in cap space. The Stars would chew up anywhere between 500,000 and 700,000 of the new space when they immediately recalled a replacement for Peverley.

Essentially the Stars have a big incentive to sign Dillon to a contract higher than the usual bridge contract. The extra cap space would allow the Stars to absorb just about any salary they want to absorb at the trade deadline should they decide to be active.

My official guess for his contract was a cap hit of 3,500,000, but that was for a six year deal comparable to his contemporaries. Salaries escalate year to year so a shorter term deal would necessarily carry a lower cap hit. If Dillon signs a two year deal he won't have that high of a cap hit, but in the long term that will add to the Stars future salary cap burden. That reality completely went over my head way back when for whatever reason.

If we work with the 24 million dollar figure over the next six years we can get an idea of what a long term deal could look like, and break it down into its constituent parts. The following is an updated look at what each of the possible contract lengths could look like with little variance from year to year in the salaries.

The cap hit column shows the cap hit for the deal based on how many years he is signed. "Next hit" assumes he signs a deal for the remainder of the time we're discussing after the current deal expires. So for year one if he signed a one year deal under these parameters he would have a cap hit of 3,140,000, and the next five years would come in at 4,200,000 if he signed a five year extension.

The longer the Stars make the contract the more cap space they can save long term, but they can make the numbers work on a shorter team deal to make the current salary cap more palatable.Those number projections just get you to about 24,000,000 over six years. The salary could still be distributed in such a way that his upcoming deal takes a smaller percentage of the total money he will make.

If the Stars were to sign Dillon to a two year contract with a cap hit of 2,500,000 dollars they could structure it so that he makes 2,000,000 this season and 3,000,000 next year. Dillon would still be on the path to make the 24,000,000 over six years his contemporaries can expect, and give the Stars a comfortable salary cap cushion. Just signing Dillon to that contract would allow the Stars to gain roughly 3,000,000 in extra cap space, but if the Stars submitted a roster with Oleksiak in the place of Nemeth they could gain another 100,000 in extra space due to the differences in their salaries in a paper only transaction. They would immediately switch places after the Stars submitted their roster.

The Stars can use LTIR without signing Dillon, but they wouldn't gain as much of the salary cap boost. They would only gain the difference between Peverley's salary and the Stars cap space. Currently they are 2,703,333 under the cap, but they could maximize the cap space by having Oleksiak on the roster at the roster date. His 867,000 salary would put the Stars 1,800,000 under the cap. The difference between Peverley's salary and that cap space would allow the Stars to add 1,400,000 to their salary cap number.

But why bother when signing Dillon to a reasonable extension gives you the most of the full bonus? The Eakin extension has shifted the focus to Dillon. You shouldn't be surprised to see him sign before the Stars submit their 23 man roster, and we should know the status of Peverley at about the same time

Disclaimer: There is a catch. Should Peverley prove to be healthy at some point this season the Stars would need to get below the cap to activate him. They would have to dump a salary higher than his to make this happen, and while there are plenty of candidates it is a slight hurdle.