A Review of Hockey Abstract 2014

Hockey is right around the corner, and Hockey Abstract 2014 will aid you in your efforts to get ready.

Share All sharing options for: A Review of Hockey Abstract 2014

Last year Rob Vollman of Hockey Prospectus put out the inaugural version of his Hockey Abstract. Following in the spirit of Bill James' Baseball Abstract, the book offers interesting hockey reading for your perusal as we get the 2015 NHL season going.

The very obvious goal of the book is to present the ideas and concepts of #fancystats clearly without excessive technical jargon or numbers. A common complaint about statistical analysis in hockey is how inaccessible the content is for anyone who doesn't want to spend hours upon hours getting acquainted with "boring" things like higher-level math. If you are one of those people this book is for you.

The book comes with essays on each team and essays about specific topics just like last year. This year Rob, along with his co-contributors from Hockey Prospectus Iain Fyffe and Tom Awad, tackle hall of fame standards, Shot Quality, what makes the best players the best, and the value of enforcers among several other topics.

Thrown in at the end is a brief selection of discussions about several other topics they deemed worthy of inclusion, but not worthy of full essays yet. Among the topics is a discussion of Zone Exits and Entries based off the data collected so far by Corey Sznajder. The data is wonderful, and the group extrapolated it to look at some league wide numbers. They included a graphic showing how successful teams are at entering the offensive zone with possession and how successful they are at denying opposing teams the ability to do so. Part of that graphic is included here: 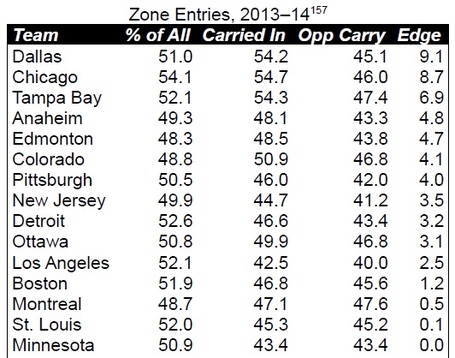 Your Dallas Stars lead the way in that differential. That's a neat nugget of information I had yet to come across anywhere.

Personally the section I found myself the most drawn to was about the hall of fame. Iain Fyffe has developed a system that projects the chances of a player making the hall of fame based off of the criteria hall of fame voters are drawn to. He goes into what criteria they most often look for on a position by position basis. I won't give those criteria away here, but it's cool to see the data behind the decisions the voters made.

Hockey is about to be back in full force. If you want to get your mind right for hockey just in time for the season give Hockey Abstract a whirl. It will give you that league-wide detail we sometimes miss in our Stars-centric world.