We start our series of positioning basics with a look at the role of the wings when the puck gets established in the defensive zone.

When we ran our offseason poll at Defending Big D a few short weeks ago, one of the things many readers mentioned wanting more of was video breakdown and tactical analysis.

Given that we're only just into the preseason, we don't have new plays to breakdown in all their glory (or, well, not) just yet, but a good way to prepare for that later this season is to establish a baseline of hockey tactics.

This is especially true for defensive zone coverage. Hockey is a free-flowing, transition-heavy game, which means true set plays are few and far between and the majority of offense is created via read-and-react types of play rather than set pieces. But there are a few general rules for defensive coverage.

Today we're going to be covering only in-zone defense, ignoring the mess that goes on in transition. This is for two reasons. The first is that transition defense can vary quite a lot by team depending on the forecheck and neutral zone schemes they prefer. The second is there are a huge number of permutations of transition defense (3 on 3 with two defensemen and a center back? 4 on 3 with two forwards and a D back?, etc.).

What we'll look at over this first series of posts is the general rules for defending once possession is established in a team's zone. This can occur in many ways, including transition plays that don't result in a score or turnover, retrieved dump ins and offensive zone face off wins.

We're only going to focus on the wingers in this post, mostly to keep this focused and at a reasonable length. We'll get to centers and defensemen next week.

So let's start with basics. Just like in basketball, there are two "main" defensive systems in play, true man-to-man (identify a man, stick with him at all times) and zone (your primary responsibility is to the guy in your area, no matter who that guy may be). Because hockey is a game filled with a ton of movement, teams tend to combine principles of both.

When I explain the basics to new beer leaguers, I always call hockey defense a matchup zone, where you ideally have man pressure on the puck carrier and switches like a zone defense away from the puck. This is a little over simplified, but it's a good place to start for people familiar with the more defined defenses in other sports.

Here's one more note for beer-leaguers: While in the lower levels of hockey, you often see a clear distinction between the role of the wings and centers (because if you're a wing like me, you're usually one of the slower skaters/less skilled overall players on a team), that doesn't exist as sharply at the higher levels. If a winger is the first guy back, he will take the center's defensive role until it is possible to switch safely. That's why NHL teams tend to rely on the F1 (first forward in the zone), F2, F3 system for drawing up non-faceoff plays rather than C, W, W.

But for clarity when talking about position responsibilities, we're going to refer to these guys as center, weak-side wing and strong-side wing.

Because I wasn't super happy with any of the screenshots for showing solid positioning (which makes sense - highlights of "the play got established in the Stars zone but everyone did their job well, got the puck back and nothing much came of it" are few and far between), here's a few quick diagrams.

Often, you'll see graphics like this that break down the defensive winger's responsibility into half of the ice. While that is true to some extent, the way NHL teams (and really, most adult league teams should) play it is a little more complex.

What happens at higher levels is the weak-side winger, or the winger on the side of the ice that does not have the puck, sags into the slot area, further away from his point man. This makes him an emergency release valve of sorts, able to cover some dangerous passing lanes, assist down low if someone gets beat one-on-one and yet still have the ability to recover and pressure his point if necessary. At the same time, this is why changes in the point of attack often lead to quality scoring chances - if teams can find that weak-side D and he can get a shot off quickly, that winger won't be able to put as much pressure on him.

So here's a more true-to-life drawing of a winger's defensive "area" to cover, with the strong side winger on top: 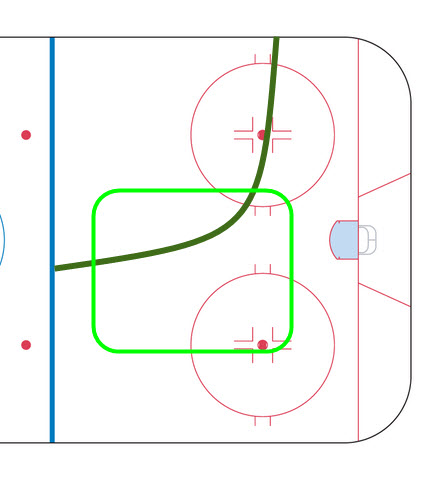 And here's that same graphic with approximate positions of defensemen and wingers. You can really see how the weak side wing sags off of the far-side point to watch the slot. 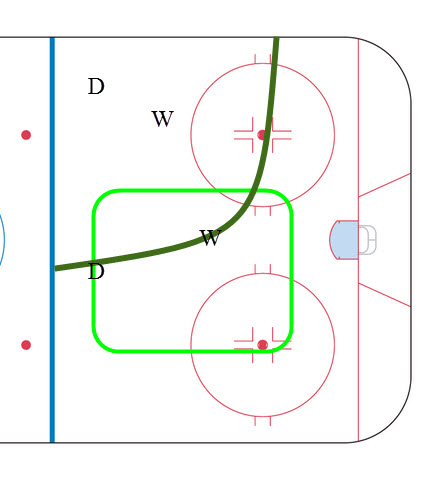 This is where the difference in bear-leaguers and professional players really comes out. NHL players can sag a lot further away from their pointman because they can recover exponentially faster. I am an objectively terrible, though enthusiastic, hockey player, and because of that, I need to stay within about 6 feet of my pointman at all times to be able to pressure him in reasonable fashion. NHL players don't have that limitation.

So let's take a look at how an NHL winger positions himself and the risk-reward of those ideas.

Your weak-side winger here is Colton Sceviour, at the far left of the picture. Jamie Benn is the strong side wing, Vernon Fiddler is the low forward down pressuring the puck carrier.  Brenden Dillon has an eye on a cutting option, and Jordie Benn is watching the slot: 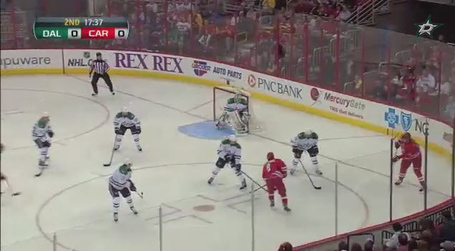 Sceviour is right about where you'd diagram him to be, and with the puck in the corner, Benn is playing low as the strong-side guy, likely with the idea of picking off a pass. He's clearly in the lane, though, and maintains his position this whole play.

I believe Sceviour is essentially escorting Eric Staal down into the fray, which is not a bad move. Staal needs to be  marked as he goes through the slot. The issue here is that Sceviour continues to glide down low once he releases Staal to the low coverage rather than stopping hard and moving back up in the zone. 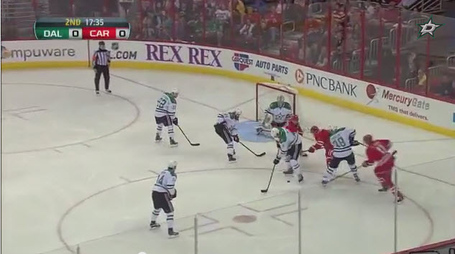 Here's where the problem starts. Fiddler and Dillon have nearly combined to force a turnover, and Sceviour has gotten sucked down way low after passing Staal off. This is especially a problem because of the numbers issue. A rough rule on established defensive zone coverage is "body for a body." In this case, the two defensemen and the center are responsible for the three low forwards and Benn is still cutting off the passing lane to the strong side point.

If a Hurricanes forward had broken loose from the low three and was by himself at the top of the crease, Sceviour's decision to go low would be entirely correct. That open player would become the most dangerous open player on the ice and need to be bodied up immediately. But as it stands, he's basically covering space. 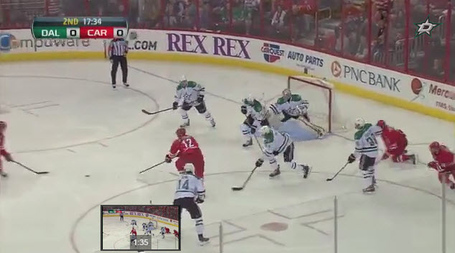 And here you can see the problem (and once again, my all-world screenshot skills - sorry). Staal knocked the puck away from both Dillon and Fiddler, and John-Michael Liles has realized he has acres of space to walk in to a shot. That area is exactly where the weak-side wing is supposed to be, and for exactly this reason. With everyone else otherwise occupied, you still need someone to defend the ultra-dangerous slot. 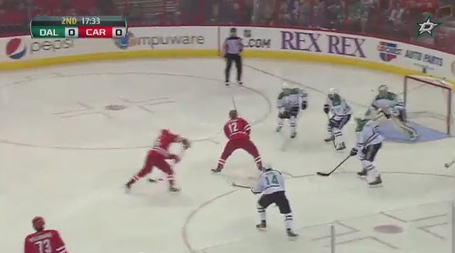 That's how you end up here (and here you can also really see the good angle Jamie Benn had to defend his point man). Liles' shot hits Staal on the way in, and that set the Hurricanes on the road to a win.

Now to be fair to the wingers, who it seems like often have the most simple job in the defensive zone, there are times teams design low swooping routes that seem to take the winger away from his assigned coverage.  This can be for a few possible reasons, sometimes to double-team the puck carrier and other times to get a jump on a speedy breakout. The latter is what I think is going on in the following screenshot sequence, where the focus is on the strong-side winger. 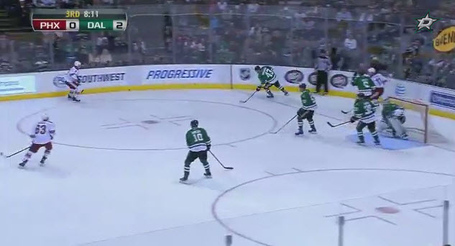 Here, you can see strong-side winger Valeri Nichushkin way down low, in fact below the goal line. His man, defenseman Keith Yandle, is about to get the puck on the half boards (hey, if you're given an acre of space, you might as well use it). Mike Riberio seems to be sliding up high in the zone to cover for Yandle, and it appears there may be a second defenseman at the blueline. The third forward is on the weak side cutting around behind the net, out of frame.

Also, note Shawn Horcoff's ideal position for a weak-side winger. You can see how he can deal with Ribeiro, should the pass go there, and also get out to at least pressure a point shot. 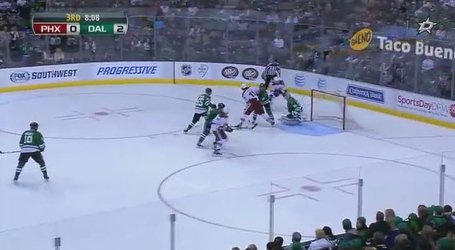 Yandle threw a shot on net, which has caused a little chaos, and the forward who cut behind the net has reappeared at the left post. Nichushkin is actually out of frame here, following Yandle back up the strong-side wall. The Coyotes have momentarily created a 2-on-1 down low, but the most dangerous guys are covered man-on-man, and Sergei Gonchar is in good position to control a rebound. Horcoff has, to his credit, not been sucked down - remember in the previous example, getting pulled too low opens up a much more dangerous lane.

Here's where I really start to think Nichushkin's route is designed. The puck is still banging around near the net - it's about to kick out to the strong-side corner, and Nichushkin has come back around into the frame with a clear eye on dropping back low again. This television angle doesn't give you a good sense as to where Yandle is right now, and he would be Nichushkin's man.

But Nichushkin is about to make a read and judgement call that his teammate will get to the puck first and need an outlet. So rather than head to cut off Yandle's potential shooting lane, he's high-tailing it back to the wall, right about where he was at the beginning of this clip. 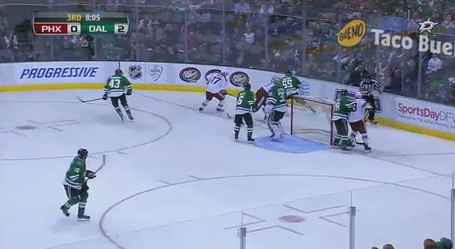 Nichushkin has made the correct read. Even though Gonchar is being pressured, he has the puck and is going to be looking for an outlet. Notice how Horcoff has changed his body angle - he's going to head for the weak-side boards in case Gonchar decides it's safer to move the puck that way away from the pressure.

That's a lot to absorb here, especially if you're new to hockey tactics. Here are a few general takeaways:

This weekend, we'll put this knowledge into play looking at the role of the wingers on a longer in-zone set, breaking down one play in more detail.