We look more at Zone Entry and Exit data from the 2014 season.

We recently began looking at Dallas Stars zone exit numbers for defensemen as compiled by Corey Sznajder (@Shutdownline). That information is just the tip of the iceberg of what has been collected so far. We continue our look at the data today by looking at how the Stars forward group entered the offensive zone and exited the defensive zone to see what we can learn about the transition efforts of the Stars.

The first bit of data I present to you is the total number of times each primary forward from last season still on the roster initiated a zone entry and their fail percentage. This is the percentage of times they failed to successfully set up in the offensive zone after two seconds. Remember this is the same 50 game sample referenced in the defenseman post.

A few things show up here that I wouldn't have expected. The currently unsigned Cody Eakin pacing the Stars is a bit surprising, but not nearly as surprising as how high Jamie Benn sits. Benn had the eighth highest zone entry failure percentage of any forward with over 100 entries in the league. And he had way more than 100 entry attempts. 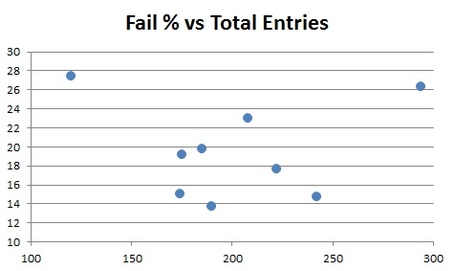 Benn is the forward way off the reservation in the upper right hand corner.

(We'll momentarily ignore the fact that Shawn Horcoff was 2nd worst in the league given that he only attempted 120 in this sample.)

Benn being that bad at entering the zone doesn't really compute with what we know about Benn the player at first glance. Finding out specific answers to what causes his high fail rate would require some time studying games, but anecdotal evidence is easy to come up with. I talked with a couple people and the observations they had meshed pretty well with memory.

Benn has a tendency to rush up the ice on his own like a bull in a china closet after getting the puck out of his own end. Only Eakin touched the puck more in the defensive end than Benn among Stars forwards, but Eakin wasn't remotely as successful. So Benn, coming out of his own end quickly, appears to get ahead of himself.

When he does it oftentimes leads to a failure to enter the offensive zone to establish an offensive possession. It's admirable that Benn is able to get the puck out of his own zone so frequently, but with the incredibly successful Tyler Seguin on the ice with him might it make more sense to pull back sometimes to wait for help?

Fortunately the information allows us to see the results of the zone entries. We can come up with a pretty good idea of  by how many goals the Stars could improve by getting Seguin to carry the puck in more than Benn.

The difference in total entries over this 50 games between Benn and Seguin is about 50 entries. So over the course of 82 games we'll make our lives easier and just round things off to about a difference of 100 entries. If you shift those 100 to Seguin instead of Benn the Stars would pick up an extra 12 successful entries due to the lower failure percentage of Seguin.

In those 12 entries the Stars would have gained an extra shot from dump ins and an extra six shots from carries. The Stars were more successful at generating shots with Seguin creating the entry than Benn by about .05 shots. So we need to factor that in for the other 63 entries that Seguin would be taking from Benn. That difference would have accounted for for about three more shots.

Through all this math the Stars would have generated 10 more shots over the course of 82 games with Seguin taking those entries. With an average shooting percentage against the Stars could have expected to gain only one more goal by shifting 100 entries from Benn to Seguin.

So, while it would be great if the Stars made a change here, how much would it really matter? If this is the most significant criticism we can level at the game of Jamie Benn then the Stars are in pretty good shape.

A quick aside about Horcoff. I don't want to write a full post about him, and I don't have a segue. The Stars might want to keep the puck out of his hands. He had the second highest failure percentage in the league, and he also was the least successful at exiting the zone with a high turnover percentage.

The most interesting aspect of this data is definitely the failure rate of Benn on an individual level, but also interesting is that the Stars add further evidence confirming the need to carry the puck in . This fact was presented as part of a presentation at the 7th Sloan Sports Analytics Conference by Eric Tulsky, Geoff Detweiler, Robert Spencer, and Corey Sznajder. All of the Stars forwards created more shots from carry-ins as opposed to dump-ins.

Several Stars forwards performed below expectations on carry-ins, particularly Val Nichushkin and Cody Eakin, but the trend is clear. If you can reasonably carry the puck in to make a play you should do it. The Stars do it well. Even Benn and Horcoff, with their high failure rates, still generate tons of shots off of their entries, but with a little tweaking the Stars might be able to do a little better.

The introduction of Jason Spezza and Ales Hemsky to the offense, both successful at entering the zone last year, should help push the Stars even further into the green. The introduction of Hemsky in particular, if he is indeed playing with Seguin and Benn, could help lessen the number of entry attempts led by Benn.

Several more posts are coming about the information, but if there is anything specifically you want to know let me know.