Nill's former boss calls the Seguin trade "tremendous," and Joe McDonnell is loving Dallas so far. If you like this, try: Ralph and Razor give their respective takes on Things, another RFA defenseman signs, and Ryan Johansen will not be getting a Columbus Day card from Jarmo Kekalainen.

Jim Nill is the Stars GM, and everyone more or less seems to think that he's just the best.  You know this, right?  You surely have not missed the myriad posts, articles, memes and GIFs demonstrating this opinion.  In fact, you do know this, and you probably have already skipped down to the Fun Links Portion by now.

Well, if you don't want to listen to me, ask Google.  Here is one (and not the only one I could have used) screenshot when you search for "Dallas Stars Jim Nill": 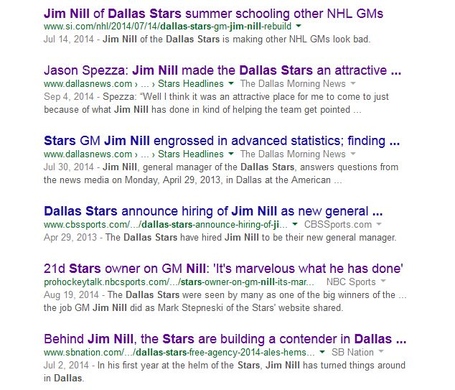 Now, if I've been doing my job, you've seen all of those posts--no need to check that, no need--but that doesn't mean we get tired of reading them.  Especially if they involve the Stars Director of Amateur Scouting, Joe McDonnell as well.  Lo and behold:

Dallas Stars general manager Jim Nill and director of amateur scouting Joe McDonnell each know a little something about building the perfect beast.

It starts with the draft and continues with the development stage until that player is deemed capable of withstanding the rigors of an NHL regular season.

McDonnell is only one year into the job, but he is certainly proving that he knows what he's doing.  Julius Honka has literally accomplished a goal already, by scoring one up in TC, and that highlights the fact that McDonnell and Nill are accomplishing their goals, by drafting, trading for, and hiring good people.  It's no surprise that he works well with Nill, either, since McDonnell spent a decade helming the Red Wings' scouting before Dallas brought him over. And while we can be sure that GMJN2 has a lot of say in things like the draft, one should also remember that McDonnell plays perhaps just as important a role in those operations as well.  Another advantage of having two top executives who have 10 years of shared work experience is that they are probably going to be on the same page a lot of the time. To wit:

Nill and McDonnell watched their American Hockey League affiliate in Texas win the Calder Cup last season and are excited that the organization's top prospects reached the final of the eight-team Traverse City Prospect Tournament here this week.

"That's how you become better up top, drafting and developing your players properly," McDonnell said. "If you can do that you'll have a good minor league system and develop from there so that in 2-4 years those players will be able to move up to the national level. It's a pipeline all the way."

That pipeline appears to have grown increasingly fruitful (mixed metaphors there, but you feel me) even in this administration's short tenure.  At present, after the Texas Stars' fantastic AHL season (not to mention their 2nd-place finish in Traverse City), the league is even starting to familiarize themselves with names beyond Jim Nill like McDonnell--although it is Nill himself that Detroit GM Ken Holland talks about in that same article:

"I know how Jim [Nill] thinks about the development process," McDonnell said. "In Detroit we used to over-ripen the guys a little bit in Grand Rapids, and I'm sure Jim's not opposed to doing that here. It wouldn't hurt these kids to spend another year in the minors where they ride the buses. Instead of being a third- or fourth-line player [in the NHL], they'll be a top player and playing big minutes in big situations.

It will always be premature to compare any team to the Detroit dynasty of the nineties-to-early-aughts, though.  Dallas may have a couple of the same pieces in town that Motown did, but the real test of the Stars' depth will come next season--barring any catastrophic inju-[ERROR ERROR STOP TYPING THAT NOW]--when the Stars' cap space and roster opens up.  If Dallas has really amassed the strong pool of young talent that we all seem to think, then one can envision the Stars targeting their available big money on one or two big players (through FA or trades) rather than going to hockey Costco just to fill out the roster like they did for way too many years before this one.  If the kids can hold their own with limited responsibility, then Dallas might actually be able to focus on bringing in that Brett Hull, that Chris Pronger, that Marian Hossa, that one guy that strong teams need to separate themselves from the crowded pack on their way to a run at the cup.

What can the Stars do until then?  Well, I'll let Joe McDonnell answer that one: "Development and building a winner is all about timing and patience."

Wednesday Links have arrived at your computer, free for clicking, mixing, stirring, whatever.

Star of stage and screen Ralph Strangis goes through the summer rule changes and some musings on the summer in his "Transition" article for the team's website.  [Stars]

While the colorful Daryl "Razor" Reaugh (I did actual finger air quotes when I typed that, make sure you do them when you read it) ends his summer hiatus with a few thoughts on the summer analytics reformation.  He gives a list of the stats he would like the NHL to start providing, too.  [Stars]

Matt Larkin starts this piece by calling Starb- er, Victor E. Green "hideous," then ends by sternly telling us all to lay off Mr. Green and see what he can do. Maybe we should start by not calling him hideous just because he is different, Matt.  I, in fact, happen to find Victor's soft pelt quite appealing.  Also, everyone: please stop calling him a booger.  If you have ever had a booger like that, seek medical help immediately.  Just because something is green and less than angular does not mean it necessarily originated from a sinus cavity.  [THN]

What are some of the storylines is training camp, one might ask.  Here are five of those storylines, another one might answer.  [In The Crease Dallas]

If you're looking for Brenden Dillon comparables, Danny DeKeyser just signed a 2-year deal with Detroit for about $2.2 million per year.  I really wouldn't be surprised to see Dillon in this range, thought his lower point totals might have a corresponding effect.  Torrey Krug, another roughly similar player, is said to be seeking $2.5 million.  [Detroit News]

Another RFA situation does not appear to be headed for a cozy ending, as Columbus GM Jarmo Kekalainen went on something of a spiel about Ryan Johansen's negotiating stance: "We have no problem paying the dollars when it's earned, but the key word there is 'earned.' While we believe in his future, we want to see him do it a little bit longer than just one year." If ever a situation seemed to be begging for an all-too-rare offer sheet, this would be it, as Kekalainen is maintaining that no negotiations will take place during training camp.  [Columbus Dispatch]

Peter Chiarelli has admitted that yes, it's true: Boston is going to have to trade a defenseman.  This seems like an odd stance for someone who will have to make a trade soon--unless it's a popular defenseman that the fan base would be angered at losing.  [Pro Hockey Talk]

Remember Aaron Rome?  No, of course not, that never happened.  Well, look out, Detroit, because the Wings have invited the 30-year-old defenseman to training camp, Ken Holland confirmed on a "telephone."  Rome is good at many things, like earning one of the longest suspensions during a Stanley Cup Final ever.  [Red Wings Front]

The USHL will be testing the practice of retaining icing rules during a penalty kill, along with some other tweaks, like making R/OT wins count for more than SO wi--hey, wait, that's not new at all!  [USHL]

As the NHL quietly continues negotiations with its officials on a new CBA, here's a look at what the officials are making now.  [Scouting the Refs]

The Ducks had some of their players--in full gear--take a shift handing out season ticket packages to fans.  I have not yet confirmed reports that Corey Perry was seen exiting the facility after Gologoski sent a Tweet to Ducks PR asking for four seats by the home team's bench for immediate pick up.  [Bar Down]