Also, how was "the Hangar" never an official descriptor of the AAC itself? That seems like a missed opportunity. In other news, Julius Honka scores goals because he is awesome, and Montreal is captain-null. I thought of that myself.

After the re-branding of the Dallas Stars last summer, including some snazzy new jerseys, fans were hungry for merchandise, shirts and jerseys with the new logo and colors. Demand was more than the supply, however, and fans were left wanting -- especially after a successful season with a playoffs appearance. 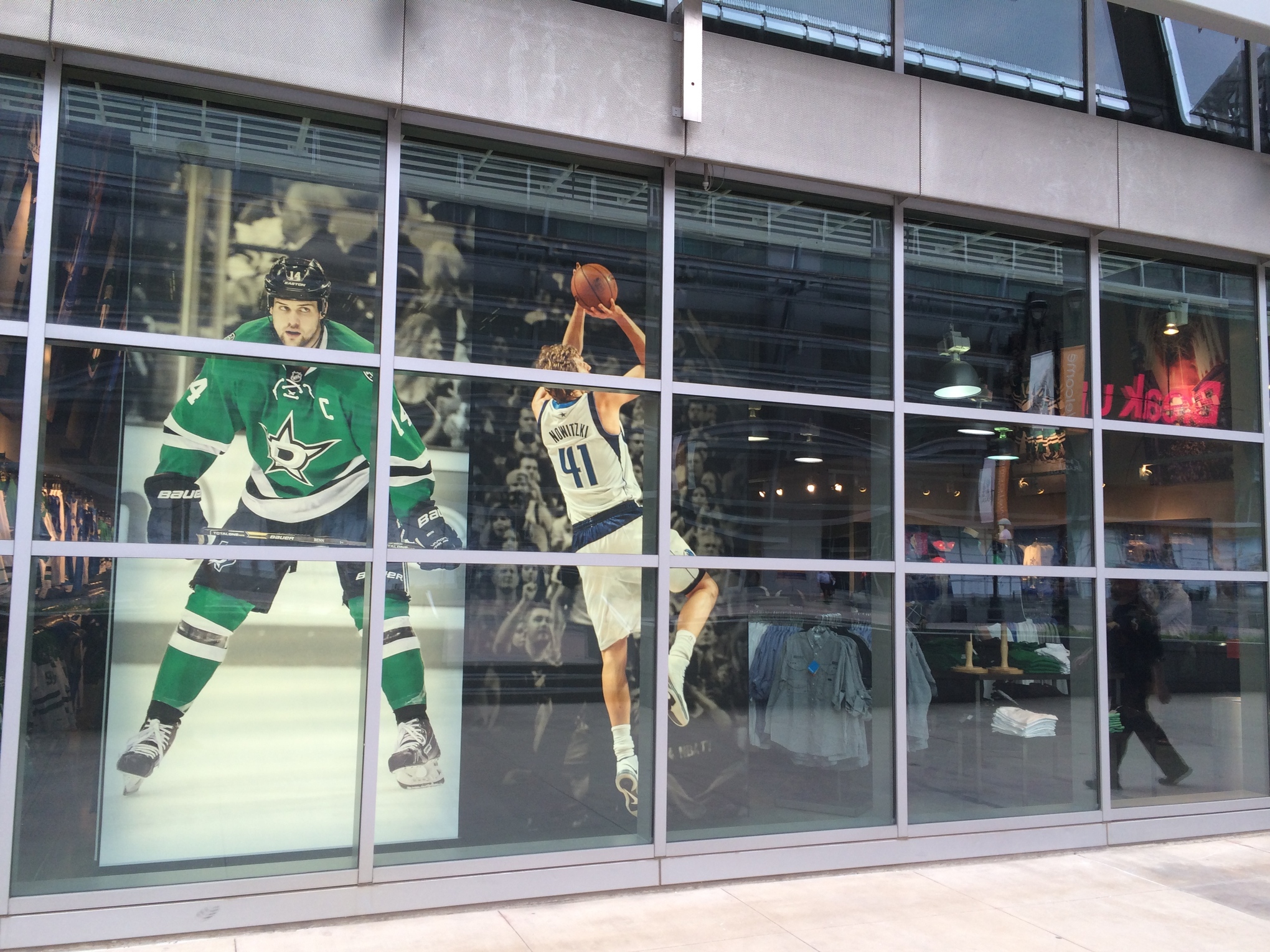 On Monday, in conjunction with the Dallas Mavericks, the Stars unveiled their new merchandising venture with the re-launch of the fan shops at the American Airlines Center -- now called The Hangar. On top of a complete refurbishment and redesign of the North Fan Shop in the AAC, the Stars held an event to celebrate the grand opening of a brand new shop located in Victory Plaza.

This past summer the Stars took control of their own merchandising and distribution, rather than operate with the NHL's distribution partner, and this effort certainly shows -- there is now a much wider selection of Stars merchandise available in stores, with more promised to still be on it's way. We were told shipments with new merchandise had arrived on Monday that still had yet to be set up in the store, and that even more would be available online as well. 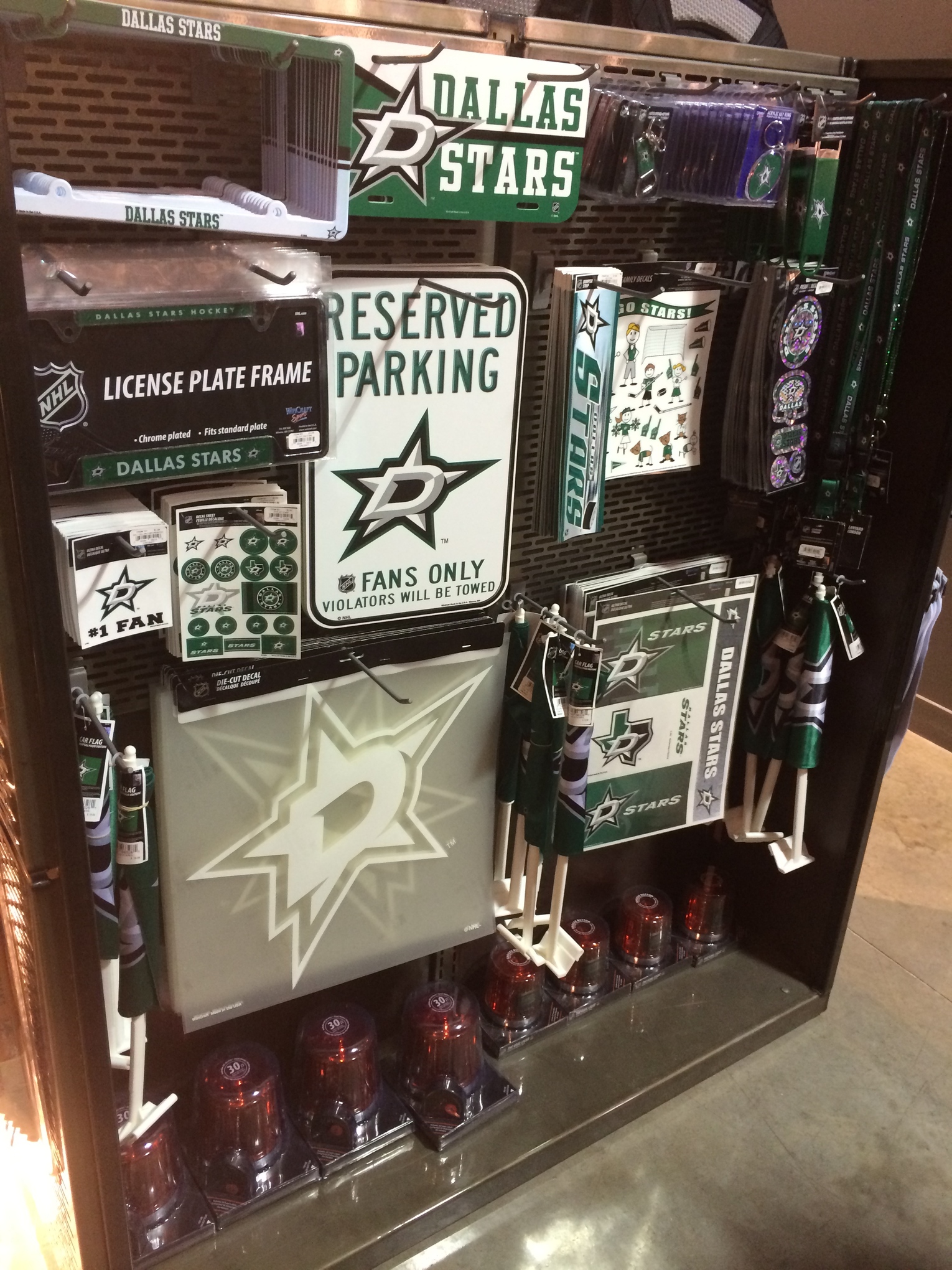 Plenty of new memorabilia to choose from...

Having control of their own merchandise has also allowed the Stars better control over pricing, and now boast some much friendlier values for fans -- a Jamie Benn jersey that cost $195 last season, now will cost $175 if purchased through the Dallas Stars. Fans should expect similar savings on most merchandise and apparel -- there are still some rather high-quality shirts and jackets available on top of some much more affordable shirts and sweatshirts.

The Hangar, located in Victory Plaza next to the WFAA studios, will feature merchandise from both the Mavericks and Stars and certainly has a decent amount of merchandise available. We saw plenty of jerseys, shirseys and shirts for both men and women, as well as plenty of random memorabilia from stickers, to keychains and shot glasses to plenty of hats and collectible hockey sticks. 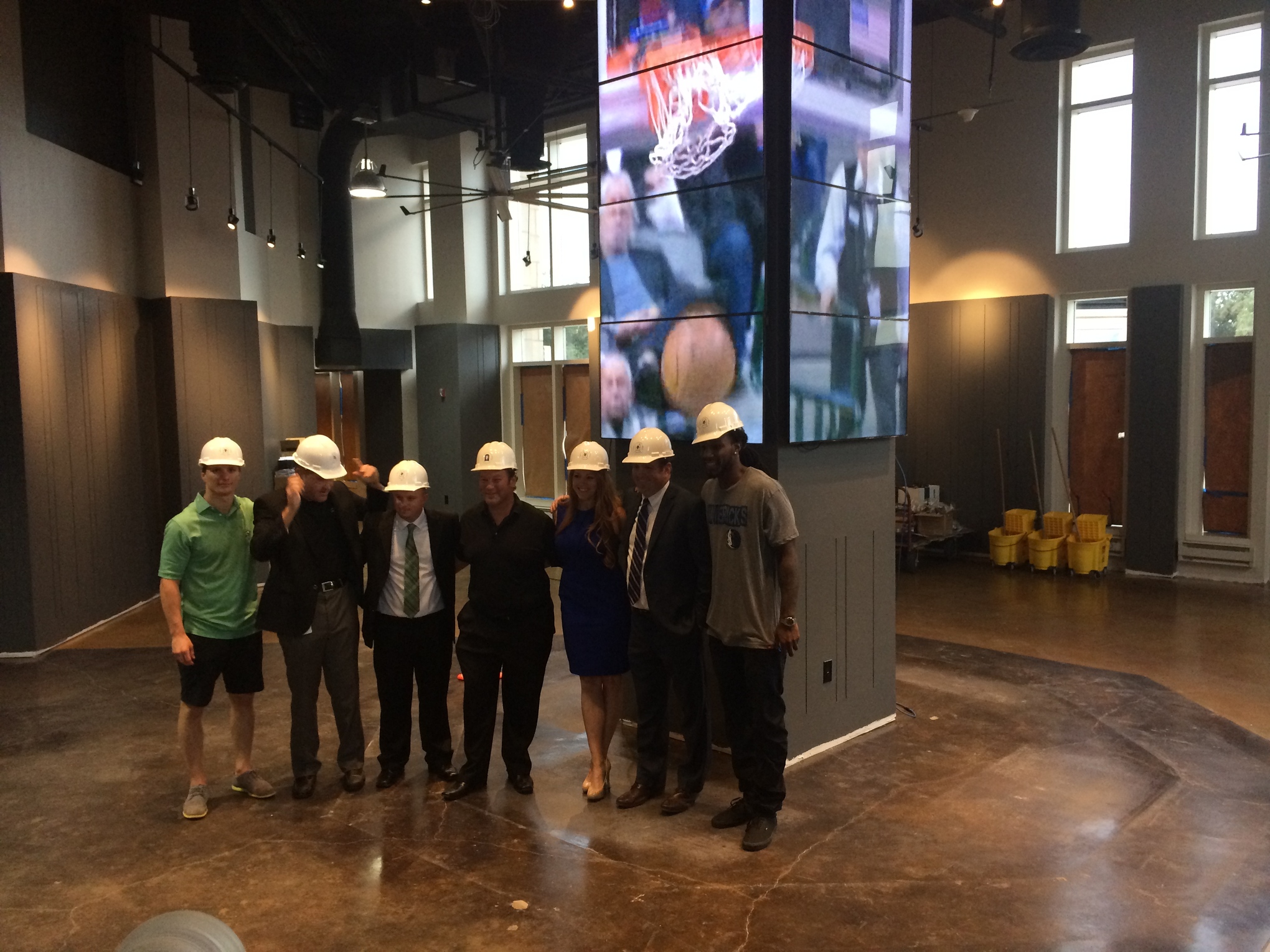 The redesigned fan shop: Antoine Roussel and Jae Crowder with a photo op

The redesigned fan shop inside the AAC wasn't finished just yet but was promised to be complete by next Monday's preseason opener. The new design has two separate entrances on the far corners; registers will be set up in front of the re-purposed old entrance, where fans will now exit after their purchase.

The Stars produced a video of the event and the new shops, and we'll post that when it's available (there's a chance there could be a cameo from one certain DBD head honcho).

Tuesday Links, for the (my) first time ever.  That almost deserves an exclamation point.

Future bumper sticker magnate Julius Honka is turning heads at Traverse City.  And just think, this piece was written even before he scored a goal Monday.  [Stars Inside Edge]

This guy, name of Derek, looks at what calamity might ensue if Eakin and Dillon aren't signed by the time Sergei Gonchar shows up for the first official training camp morning hot chocolate.  [THW]

In the return of Elliotte Friedman's 30 thoughts, Seguin is cited as saying he wouldn't be surprised if Ruff uses him on the wing every now and then.  We'll just see about that, Tyler.  [SportsNet]

What can the Wild do to improve their powerplay?  Oh, good, I thought it was just a Dallas problem.  Yikes, those graphs are not enjoyable reminders.  [Hockey Wilderness]

It took some effort, but I found some Boston sportswriting that doesn't appear to be intentionally inflammatory.  Fluto Shinzawa (who is really a legitimately excellent writer) gives his rundown of the league as well as ten ideas for the NHL to start thinking about.  [Boston Globe]

Nail Yakupov's summer was kind of like Nichuskin's, only he went to a Katy Perry concert, Turkey, got tanned, continued living in Johnny Boychuk's house, and got his driver's license.  So, it was nothing like Val's summer at all. Read this interview, it is just great.  [THW]

The Canadiens will have no captains this season, at least to start.  I think we should care about this, but I'm finding it difficult.  Wait, I just started caring again: Ochocinco wants to join the team.  Does that mean their plan worked?   [Eyes on the Prize]

Marc-Andre Fleury has not been much better than his backups recently.  As in, over the past six season recently.  Here is a fairly damning piece on what the Penguins have really gotten from the first-overall draft pick.  [SportsNet]

An interesting look at some of the analysis being done with Corey Sznajder's zone entry data.  SportsNet gives their take in a presentation of the Touches/Corsi Against ratio. Guess which Dallas Star did best in this category last year?  You will not guess, probably.  Remember, this is only the tip of the iceberg.  Also, if you're looking for a reason to toss this analysis in the garbage without another thought, Adam Pardy ranks higher than any Dallas Star.  [Sportsnet]

ESPN is reporting that the NHL doesn't even care about HBO anyway, and has signed a deal with EPIX, which is (checks internet) a channel without original programming (yet!) that maybe some cable subscriptions include.  Well, okay then.  Oh, wait, now I get it: The NHL is going to do two of these series this year, adding another one for the Stadium Series game in San Jose.  I am going to guess that this is a money issue through and through.  (Brave guess there, big guy) [ESPN]

Finally, remember when the NHL did 24/7 for the Pens/Caps Winter Classic?  I did, but I guess you could watch this anyway if you forgot or something.