A versatile instrument in Lindy Ruff's toolbox- But he needs to keep those penalty minutes down.

In phase one of Jim Nill's turnaround of the Dallas Stars lineup he assembled a clear top-line combination that could compete with any in the league.

The second-tier, so to speak, was left a little wanting. Father time, the Stars' new style, or injuries, or all of the above, caught up to Ray Whitney. Erik Cole and Alex Chiasson all struggled at times in top-six roles.

"I got a great contract," Roussel told Dallas Stars.com last week. "I wanted to stay here for a long time. We were on the same page, so I am really happy. I am excited to get back at it. The work is not done yet and I'll be working until my career is over. [The contract] gives me stability and I love it. It's nice."

The same page. Eventually. As Mike Heika reported a couple of weeks ago, the Stars wanted to give him something like one year and just over one million. Roussel wanted over two million per. They settled on the two and the Stars got some term out of it.

That might complicate Cody Eakin's situation a little, but Roussel, at least, can move forward in comfort knowing he'll be around a while.

There's an easy consensus out there that the Stars' Frenchman will line up with Ryan Garbutt and Eakin on what we'll all call the third line, and that will be it. His usage last season suggests this would be an ideal situation. 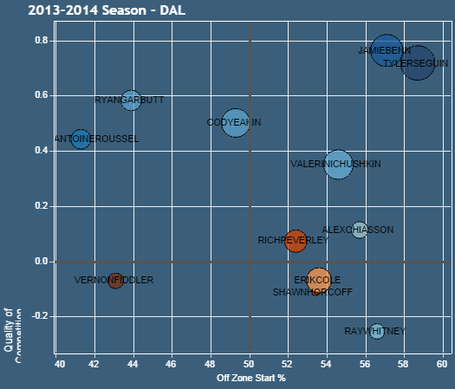 He kept his possession numbers well into positive territory despite playing against above-average competition and starting, on average, closer to his own net than any other forward on the team. That's got "playoff-caliber third line material" written all over it. That's what you want out there getting under the skin of the opponent.

He'll have a chance to do a bit more than that, though, as injuries hit the lineup. He's shown himself to be a capable offensive contributor along side the right teammates.

Fourteen points (7 goals, 7 assists) in 39 games in the lockout shortened season was a pleasant surprise. Almost exactly double that (14, 15) in double the games the following year was encouragingly consistent in an ever shuffling group of lines.

He'll have a chance to play with Jason Spezza and Valeri Nichushkin or Ales Hemsky, one would think, in what should be a spirited competition with Erik Cole as the pre-season unfolds and various chemistry combinations reveal themselves, or in some cases, fail to.

And lest we forget, he'll nearly lead forwards in shorthanded ice time again, if last season was any indication of how Ruff wants to use him.

As always, and as was perpetually said of one beloved Mr. Steve Ott: Where Roussel plays could largely be dictated by how he handles his biggest drawback - penalties. He was given an unscheduled night off in early January for the issue and responded positively, but both he and Ryan Garbutt had some discipline issues in the playoffs that were costly. As players mature this is generally addressed. The question is how soon.

Then again, sometimes you just need a bull in the metaphorical china shop. He can be that guy, too.

Any way you slice it, no matter where he ends up, The "Rooster" could be a jack of several trades for the Stars this season, sliding up and down the lineup as needed, and of course, being pretty gosh darned hard to play against.