One of likely many posts diving into 2014 Zone Exit numbers.

The invaluable Corey Sznajder (@ShutdownLine on Twitter) has been tracking the hell out of zone entries and exits this summer. You may recall that he set up a fund raiser to raise funds for his effort to track the 2014 season for the purposes of distributing valuable data. He made what he had available to a few people a while back. So I've been digging through it a bit.

At the time he had about 50 Stars games tracked. That isn't a ton, but we're talking entries and exits. There are a lot of them over the course of 50 games. Three different Stars defensemen had 1000 touches in their own end over that period. The lack of multiple seasons of data means we have to remain skeptical of the results to some degree for now, but the totals we have yield some interesting results.

Given the scorn they receive the very first thing on my to do list was to give the Stars defense corps a closer examination.

A few definitions are going to be necessary before we begin. Touches are the number of times a player touched the puck in his own end. Possession % is the percentage of times the player was able to successfully lead an exit out of the defensive zone. Turnover % is the percentage of times the player turned the puck over in some form when leaving the zone. The table is sorted by Possession %, and you definitely need to take number one with a grain of salt.

One thing worth addressing briefly is what happens to all of the touches not deemed successful. Keep in mind that a success is moving the puck out of the defensive end. A player can pass the puck to a teammate who then moves it out of the zone. The player who moved the puck out would be credited with the success. One way to think of it is the comparison of "making a play" vs "not making a play" for whatever reason.

Patrik Nemeth was the Stars most successful defenseman, but he only had 15 touches in the games so far tracked. I left him on the list because he did look really good when he was up, and he was excellent in the Calder Cup Playoffs. I wouldn't be shocked to see him high on this list with more information,

Sergei Gonchar and Kevin Connauton were surprisingly the most efficient players, but on the one hand it isn't that surprising. Both players can pass when they get the puck. The problem they've shown is the ability to get the puck back, also known as playing defense.

Interestingly, the data does reflect what has been said in this space repeatedly about Jamie Oleksiak. He has to get it together in his own end or he isn't going to have a meaningful NHL career. That turnover percentage is pretty crazy high. Only five defensemen (Mike Komisarek, Corey Potter. Ed Jovanovski, Mark Fraser, and Paul Ranger) had higher turnover percentages in this sample. Komisarek and Jovanovski were both also more consistently able to exit the zone.

Like Oleksiak, posting a 21% success rate with about a 10% turnover rate was rookie Olli Maatta of the Pittsburgh Penguins. It's possible to be successful with those numbers. The difference is Maatta did it as a 20 year old straight out of juniors and scored 29 points. Oleksiak doesn't have that offensive pedigree or inexperience on his side anymore. The Stars will need him to be much better in his own end to justify giving him a roster spot.

I'm not sure what to make of Trevor Daley here. The full season of data should clear things up, but what we have isn't a good indicator of Daley's ability to make a play out of his own end. 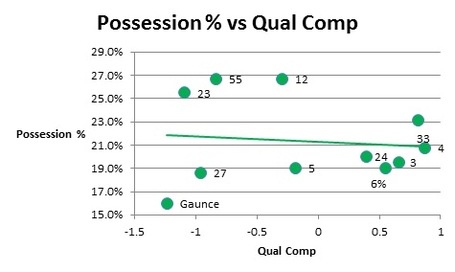 The graph looked a little wild so I checked out the entire league. All defenseman who, over these 50 games, touched the puck at least 100 times in their own end are graphed here. 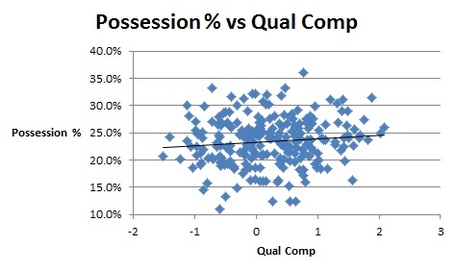 In other words, Quality of Competition appears to have nothing to do with a player's ability to exit the zone successfully (R squared of .01, for those interested). In hindsight that makes sense. The other team's ability to generate shots isn't going to have much to do with a players ability to get the puck out of his own zone. So we can pretty safely say that Gonchar and Connauton were the best at it over these 50 games.

Without league context these are just cute little numbers. The league average for defensemen is a 23.4% success rate. The league average turnover rate is 6.8%. Only Gonchar beat both of those standards. The defense corps as a group was 25%. Team wise the Stars were 10th in the league.

The Stars are high on this list without a top end "zone exit-ing" defenseman because they were able to happily avoid boat anchors unlike some of their counterparts. The Stars least successful regular defenseman was Daley at 19%. Jordie Benn was second at 20%. The Kings, higher than only Winnipeg and Edmonton, have anchors Willie Mitchell, Robyn Regehr, and Matt Greene under 16.5%. The Avalanche have Jan Hejda anchoring things down at 16% too.

Shout out to the Jets who were the worst in the league AND had Ondrej Pavelec in net.

What we can take away from the league data is that the Stars aren't that far away from having an elite ability to get the puck out of their own end successfully. The main difference between the Stars and the teams ahead of them is an elite puck mover.

The Blues dominated with Jay Bouwmeester, Alex Pietrangelo, and Kevin Shattenkirk above 30%. Duncan Keith and Nick Leddy popped 29% and 30% respectively. The Senators employ Erik Karlsson, the owner of a 36.1 rate. He wasn't alone though. Cody Ceci and Patrick Weircoch were both above 30 too. Keith Yandle of the Coyotes was at 32.2%. Roman Josi, Marco Scandella, Ryan Suter, Andrej Sekera, John-Michael Liles, and Ryan Murphy were all above 30 also for the 9 teams ahead of the Stars.

The Stars were pretty good last year and should be even better this year, but the defense is still lacking the puck mover they need. Perhaps John Klingberg could be that guy, but it isn't likely that he will be in 2015. The Stars can still be a really good team without THAT guy, but if he were to emerge the Stars could have a group with an elite ability to get out of their own end.