They did a pretty good job too.

The people of Katy, TX apparently want to play some hockey. The town of 15,000 people is home to eight high schools. One was vandalized last week by some currently unidentified citizens who painted a hockey rink in a student parking lot. This is the full article in the link:

Katy ISD is trying to figure out who is responsible for spray-painting a full-scale hockey rink in the parking lot of Seven Lakes High School.

District spokesperson Dennise Cantu says the district believes it happened last weekend. The red, blue and yellow paint lines are near the tennis courts, where students typically park their cars.

The design, so intricate, it's almost hard to believe it's vandalism, but Katy ISD police are investigating.

No word yet on how much it might cost to remove the paint.

If you have any information, you are asked to contact Katy ISD police.

I don't live that far from Katy, at least compared to most people in the country who enjoy hockey, so I headed out there to check it out for myself. I wanted to see first hand what it actually looked like. As I got within a mile of the school it started raining hilariously hard from one giant cloud. When I got out of my car the rain had stopped, but the lot was soaked so the pictures aren't as crisp as the one from the original story.

The first thing you will notice is how wide open the parking lot is. It has plenty of room for a hockey rink. This first image is from what we'll call the home side of the rink. Seven Lakes High School is in the background. That jerk of a cloud is partially above the school. 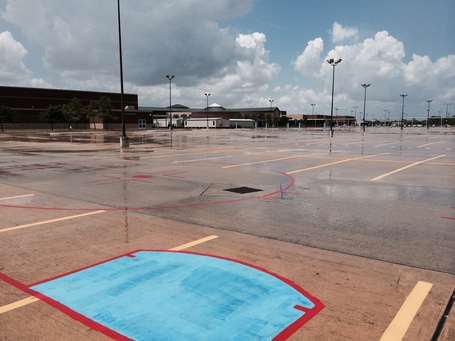 The rink is in a student parking lot behind the school off of the road. It is separated from a different lot by a large walk way. To the right of the rink is a tennis court and other sporting areas. About 30 feet behind this crease are houses with solid fences. If you didn't know it was here, or weren't looking for it, you would never find this.

(I don't want to be that guy either, but the original story mentions yellow lines. You can probably deduce what those are.)

I was struck by how detailed the rink was. Notice the little red lines inside the crease. They serve no purpose for "vandals" looking to get some hockey in, but there they are. 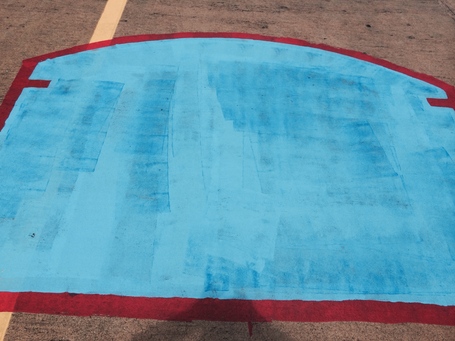 You have to think these guys probably used stencils so the crease detail becomes less surprising, but other aspects of the rink weren't necessary yet are still present.

For one, the goalie no handle zones are present. 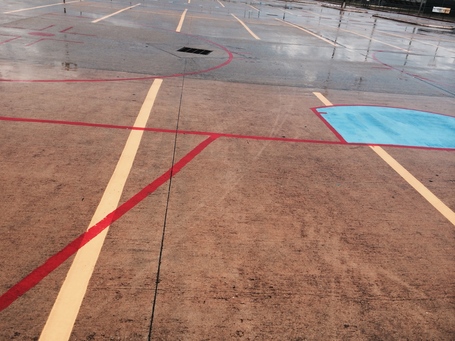 The artists included the ref half circles which would be along the boards, another detail that isn't really necessary. 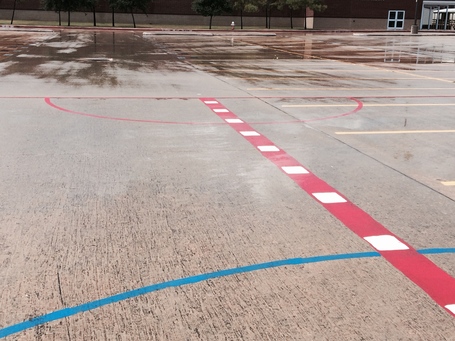 Check out the red line. They didn't simply paint a long red line through center. They added white squares to make it look like ice. It also really makes the rink pop.

These guys even put face off dots in the neutral zone. In the background of the picture you can see the tennis courts and other areas on the opposite side of the rink from the school. 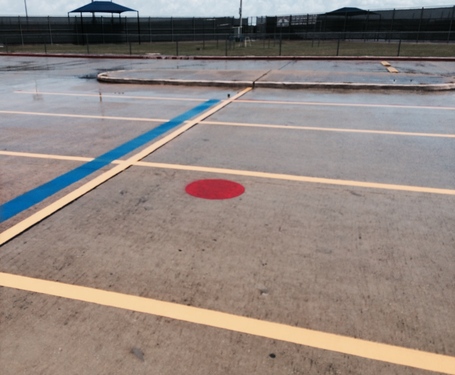 You can also see how straight that blue line is compared to the parking spaces. It really looks like they had line stripers similar to what road construction crews use to draw street lines.

The face off circles in each zone came with full detail too which again suggests stencils. The dots have areas for centers to put their sticks during face offs. 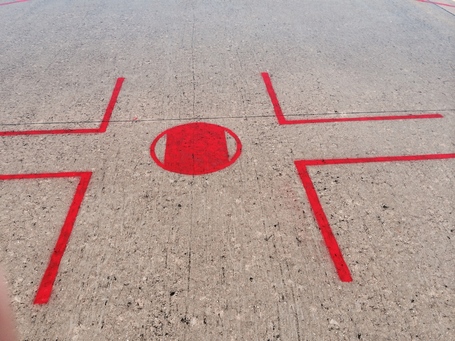 The outer circles have the standard winger markings too. 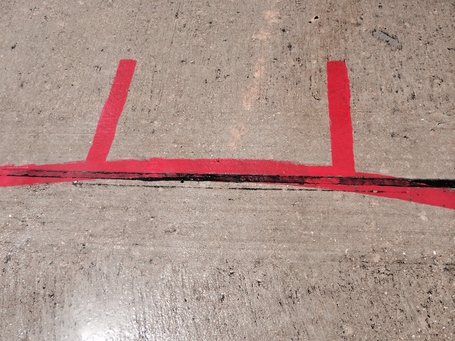 It's hard to tell from those photos, but it isn't really a "full size" hockey rink. There is virtually no neutral zone. This is the view of the opposing net from the bottom of the neutral zone face off circle. 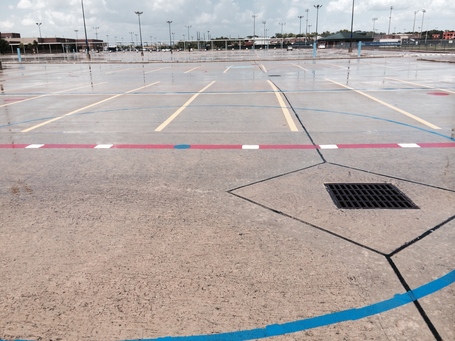 When you move about 15 feet closer to the opposing crease this is your view. In the background you can see the barrier that helps keep this rink out of view from one of the main parking lots. 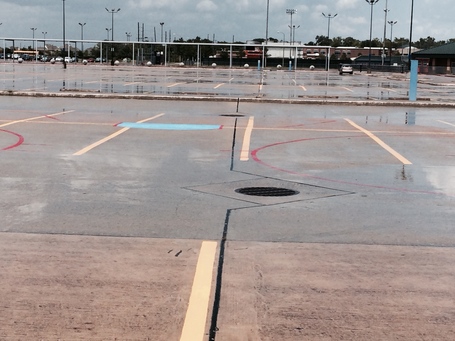 Again, if you aren't looking for this rink you aren't going to find it. Whoever made this pretty obviously picked this spot because no one would see it during the summer. Now the question becomes what will happen to it.

Katy ISD appears to be treating this as a criminal act, and they aren't wrong. It is vandalism. The people who did this painted a rink on public property without permission.

On the other hand though, who is this actually hurting? You can see from the pictures that the parking spaces are easily visible. This lot is also way away from anywhere that visitors would ever park on school business so kids playing hockey will not be a distraction.

Commenters on this story are almost unanimously in favor of leaving the rink alone. 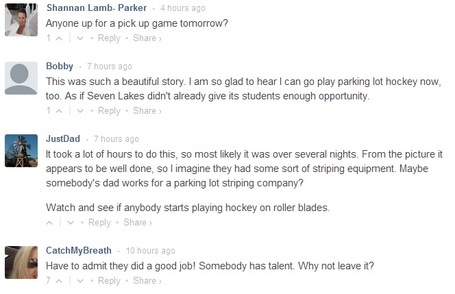 Stars fans joined the fun too, and someone claiming to be an alum of the Seven Lakes hockey team trolled the football team. 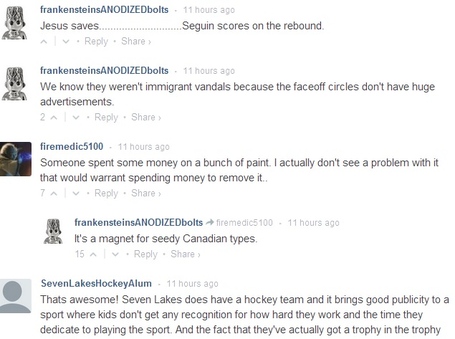 Two different posts on Reddit popped up about the rink. The first was in Reddit's r/hockey. The comments are overwhelmingly supportive as you would imagine. In r/Houston the story was posted once again to favorable replies.

Public sentiment as surveyed by the internet isn't a perfect proxy for public opinion at large, but support is obviously there to some degree for keeping the rink. Yeah, it's an act of vandalism, but it really is a victimless crime. Katy ISD has been given the gift of a hockey rink for free.

Here's hoping they keep it.