What are the odds of Travis Morin finding an NHL home?

The Dallas Stars entered the offseason needing a solidified second line to be able to call themselves a no doubt playoff team. Before they made it rain with the dual acquisitions of Jason Spezza and Ales Hemsky, there were some corners of the Stars-obsessed internet clamoring for Texas Stars center Travis Morin to get a shot.

A larger, more realistic section of the internet simply wanted to see Morin get a shot at the NHL roster. They seem to have good reason for wanting that. His track record of AHL success is enticing. In 284 AHL games played, Morin has 208 points. He was the 2014 AHL regular season MVP (also won by Spezza in 2005), playoff MVP, and a first team All Star. He has as distinguished of an AHL career as one could imagine.

A distinguished AHL career brings this exchange from Bull Durham to mind:

Annie: I looked up your records -- You've hit 227 home runs in the minors. That's great!

Annie: Why not? If you hit twenty homers this year you'll be the all time minor league champ! The record's...

Crash: 247 home runs in the minors would be a dubious honor, if ya think about it.

I don't mean to disparage his career. He should be proud of it, but Morin didn't set out to play professional hockey with the end goal of being a good AHL player. Everyone rightly wants to be in the NHL (or I suppose an import player for a top-end European league club) for both the notoriety and paycheck.

Unfortunately for Morin, he was born in 1984. He left college in 2007 at the age of 23 and since then he has played in parts of eight seasons in the ECHL initially before moving up to the AHL. He would have been an older prospect upon leaving college. At this point, he is at least six years removed from being a prospect. We can call it an unfortunate break or an oversight if we desire to attach a label to his situation. Regardless of the label we give the situation, the reality is that he faces an uphill battle when it comes to making an NHL roster.

I used the Hockey-Reference Play Index Season Finder to find the list of 30+ year old NHL rookies who have ever contributed 15 or more points while playing in ten or more games. This is the entire list throughout the history of the NHL. 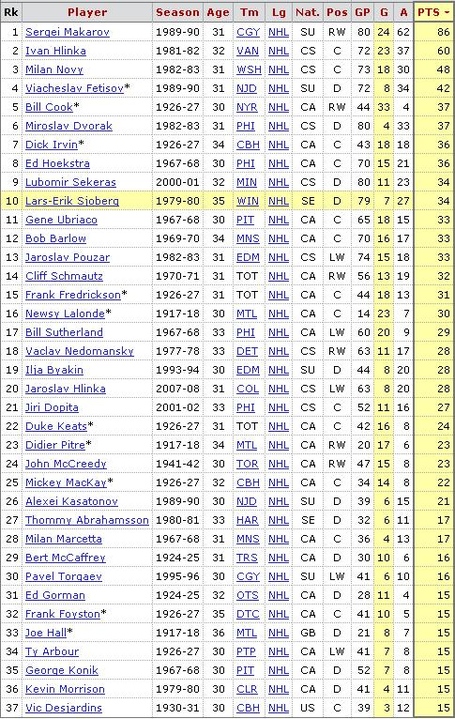 37 guys. Ever. Those 37 break down predominantly into three groups: Europeans, players entering the league during times of league expansion, and guys who were almost too old to be drafted into World War II. Since 1990, there have only been five players to do it. Ilya Byakin (1994) and Pavel Torgaev (1996) were in the 90's. Lubomir Sekeras (2001) and Jiri Dopita (2002) followed in the early Aughts. The only player to fit this criteria in the last 12 years is Jaroslav Hlinka, who lasted one uneventful year in Colorado. He made his debut seven years ago and counting.

The odds aren't in Morin's favor. For a team to plop him on their NHL roster, they are going against that rich history, over a decade of scouting recommendations, and the standard line of thinking that younger players—preferably those with successful NHL track records—are the players to give NHL looks. The math checks out. A successful younger player is much more likely to give a team more years of cheap controllable production and that many scouts are unlikely to be wrong.

The question becomes this: at what point is his production such a cartoon that he has to get NHL consideration? He is likely going to be no more than an emergency option in Dallas. They never would have been able to sell Morin as a second line option upgrade. Given his skill set and the way the Stars use their fourth line, the idea of using him there was unlikely to appeal to them. They use Vernon Fiddler's group in the defensive zone against lesser competition and defensive zone play isn't why you would take a flier on Morin.

When training camp ends, Morin is going to have to clear waivers once again unless the Stars do something out of left field and give him a shot at being a second line winger. The odds are high that he will clear, but you have to wonder how many of the poor teams in the league would benefit by claiming Morin. Is there really no room on any of the Oilers, Flames, Jets, Predators, Panthers, Islanders, Coyotes, or Senators rosters for one of these teams to at least see what he can do?

History is against Morin, but you have to wonder if his video game numbers leading the AHL champions will tempt someone into letting him give the NHL the old college try for the 2015 season.