The cap space. It's gone.

The Dallas Stars added Jason Spezza, Ales Hemsky, Anders Lindback, and Patrick Eaves on day one of the July roster movement bonanza. The salary cap situation is quite a bit different this morning. Let's reset and see where we are. We'll start with the forwards. 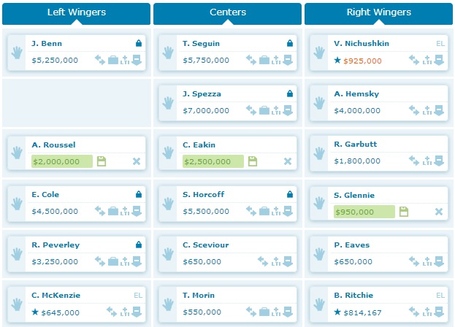 What I did was use capgeek's armchair GM to pull up the forwards who could potentially be on the roster. I figure it's going to take nine million or so to sign the Stars four main restricted free agents. Maybe Roussel gets less. Maybe Eakin gets more. Maybe both get less and you add more to Brenden Dillon (who we will get to momentarily). No matter what permutation you use the cap number itself isn't going to change much.

There are 17 guys for the 14 roster spots (12 regulars and two scratches).

You may notice that I left the second line left wing spot open. We really don't know who is going to slot in there yet. The most painless solution is to pencil Curtis McKenzie or Brett Ritchie in up there. McKenzie would make more sense. Spezza is a right shot. McKenzie is a natural left winger who shoots left. Ritchie is a right winger who shoots right. The easiest fit is McKenzie.

The Stars could slot Erik Cole there, but given that he only dressed for three of the Stars playoff games and played an average of ten minutes in each I think it's safe to say that isn't going to happen.

If Rich Peverley is going to play he could fit in there too. The same righty/righty issue would be present as with Ritchie though. And I don't know that the Stars can bank on him playing. You hope he does, but you can't count on it. Not with the other moves suggesting a pretty clear "we're trying to win get out of our way" message.

So, that leaves you with two other options keeping in mind that yesterday was only the first day of free agency, and that Nill and his staff have had quite a good deal of time to formulate their plan for the off-season. You either trade for another top six winger or sign one of the available ones.

God only knows the trade market at this point. There are however a few capable free agents still on the board. Radim Vrbata is the most capable goal scoring winger left on the market. Coming off an ugly 7.6 shooting percentage that saw his goal total drop to 20 I think there is a good bet that he could be had for a reasonable salary.

Dustin Penner is another guy who could make a lot of sense. He struggled something fierce after being traded to the Capitals, but prior to the trade he had 32 points in 49 games. Outside of a couple rough years with the Kings he's been a very productive NHLer. He also loves pancakes.

The defense and goaltending are what they are. The only guy missing from the chart is Cameron Gaunce because you can only put so many guys on the charts. 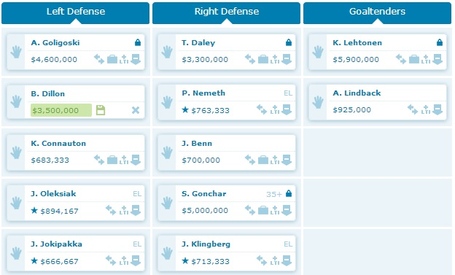 According to Mike Heika the Stars appear to be done with the defense outside of "subtracting Sergei Gonchar".

The Stars interest is in keeping leverage in any situation. They have no reason to divulge any plans whatsoever. The message with the forward acquisitions was "we are good enough to win now...let's go". I'm now supposed to believe that the Stars are comfortable with Alex Goligoski, Trevor Daley, Brenden Dillon, Jordie Benn, and some mixture of three of the rest as the 2015 defensive corps?

You can sell me a lot of things, but this is a tough one.

The writing is on the wall with Gonchar. The Stars at the moment have ten defensemen for the seven slots after Gonchar is removed from consideration. Dillon, Daley, Goligoski, and Benn are locks for the roster unless an unforeseen trade materializes.  Patrick Nemeth would appear to be the leading candidate for one of the two regular spots remaining.

What about Kevin Connauton? He got into 36 games, but Lindy Ruff didn't even remotely trust him. He turned 24 in March and still will need to pass through waivers to go to Austin. He seems like a good bet to be the 7th guy again, but the idea that they would give Connauton a regular role after how little trust Ruff had in him seems questionable at best.

That leaves one open regular spot for Jamie Oleksiak, Jyrki Jokipakka, Cameron Gaunce, and John Klingberg. Gaunce has an uphill battle at this point even without any acquisitions. Oleksiak is the biggest name of the group, but a pretty good argument could be made that of those four he's third in terms of NHL-readiness.

The Stars defense corps needs someone who can competently man a powerplay point. They don't have a right handed defenseman at all currently on the roster. I think what I'm trying to say is that John Klingberg looks to be the leading candidate for the last defensive spot by a landslide. It isn't out of the question that they view Klingberg high enough that Nill's statements about the defense are true.

They may make no more acquisitions, but I would bet heavily on Gonchar being gone at the bare minimum.

If you move Gonchar while retaining 2,500,000 of his cap hit this is essentially the roster you have to work with: 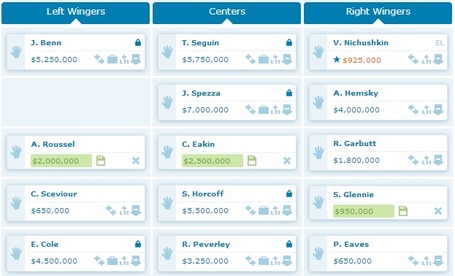 That roster is a no doubt playoff team. It's also just a hair under the salary cap. If the Stars can assume less of the Gonchar money the number grows. If the figures I used for the restricted free agents come in lower the number grows. But the overall point here is that at the moment the cap space is gone for all intents and purposes.

With that being said it isn't hard to see where the Stars could create more. The Stars could still look to move Cole who should have some value. There are a lot of bad teams in the league and his contract really isn't heinous. That could be a maximum of 4,500,000 in extra space that wouldn't really hurt the on ice product.

If Peverley is unable to play the Stars could conceivably create an extra three million in space by putting him on long term IR on the first day after rosters have to be set, but that isn't going to help them now.

Waivers are going to be a big player for the Stars. I kept Scott Glennie and Colton Sceviour on the roster because both players will have to clear waivers to be demoted. Do the Stars want to risk either player at this juncture? Maybe, but it's hard to imagine after they kept Connauton up all last year.

Travis Morin, everyone's favorite reigning AHL MVP, is going to have to pass through again. There simply isn't a spot for him. Does he get claimed? I think there's a chance he does, but it's no guarantee.

On defense, Gaunce will need to pass through waivers again. After this coming season Oleksiak will be waiver eligible. The Stars need Oleksiak to keep progresing steadily so he can earn NHL playing time soon. He's very young, but his time in the AHL is running out. If you're looking for possible trade pieces right now is probably the height of his prospect-y value.

Overall this looks quite a bit nicer than it did in June though, eh? The Stars look to be pretty much done unless they are able to move Gonchar and/or Cole. It definitely shouldn't be ruled out. If they are done it's still a hell of an improvement on just two years ago.