The rest of #ConferenceIII is now on notice.

Do you like your forwards fast, with puck skills, and a good shot?

You're going to love Ales Hemsky then.

The Stars signed him to a three year deal with a cap hit of just four million which makes him the Stars 9th highest paid player just two years removed from bankruptcy hell.

Hemsky has never scored 30 goals. Hemsky hasn't topped 70 points since the 2008 season when he was 24. Twin issues have held him back from being the offensive force his skills suggest he should be. The dual forces of injuries and the Edmonton Oilers have limited his total production.

Ales has 477 points in 652 career games. Quick math tells us that he has .73 points per game in his career.

Jamie Benn currently has .79 points per game. Matt Duchene has .78. Patrick Marleau is at ,75 for his career. Logan Couture comes in at .74. Rick Nash scores .8 points per game. We could extend this exercise forever, but the point will remain the same. Hemsky has historically been an excellent, if not elite, scorer in this league when healthy.

The last three years though Hemsky has been pretty sturdy. Ales has participated in 85% of the games his teams have played over that span. The Stars can pretty reasonably expect Hemsky to skate in about 70 games and, based solely on his historical rates, chip in 50 points. 50 points would have placed Hemsky third on the Stars in scoring.

But is it possible the Stars could get more out of him?

The Oilers did everything they could to suppress his production. One of the main issues holding Hemsky back has been the quality of his teammates. 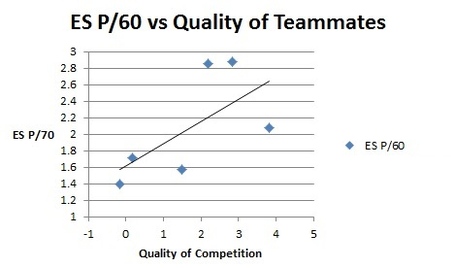 If you put good players around him he produces at even strength. One of those top seasons was the 2010 season where Hemsky only got into 22 games. Hemsky then, usually, is about a 1.7 points/60 even strength player. That would have made him the Stars 5th best even strength scorer per minute last year.

Second line minutes for the Stars would have been in the same range Hemsky has gotten in the recent past, but given the clear talent that will be on the Stars second line it wouldn't be shocking at all to see the top two lines pick up a bigger load of minutes at even strength.

Last season was a strange one for Hemsky though. With the Oilers he was a .47 points per game player in all situations. With the Senators he jumped back up to .85 points per game despite playing less minutes per game in Ottawa then he did in Edmonton.

Sam Gagner and Boyd Gordon were Hemsky's two most frequent linemates in Edmonton. To put this nicely Hemsky was the station wagon from Vacation. Gagner and Gordon were collectively Aunt Edna's dog if Aunt Edna's dog were a battleship anchor. These are the Corsi %'s of the two with Hemsky, without Hemsky, and Hemsky without them.

Spezza and Hemsky had about 200 minutes together, the same total Hemsky had with both Gagner and Gordon. Together they were a 53% Corsi duo. They played in roughly the same conditions Gagner played in, but they were significantly more effective. Now they man the Stars second line with a to be determined linemate.

Where Hemsky fits on the powerplay is another consideration. The departed Alex Chiasson was third among Stars forwards in PP TOI/G. The recently departed Ray Whitney was fourth in PP TOI/G among forwards. Erik Cole was 5th. We can reasonably expect Jason Spezza to be up there. Hemsky should be too. What about Valeri Nichushkin though? Or potential rookies Brett Ritchie and Curtis McKenzie? Hemsky should settle in on the second unit, but the point is the Stars have options.

Oddly enough Hemsky has been pretty bad on the PP in his career. Below are the shots/60 with Hemsky on the ice and the rank amongst his forward teammates. 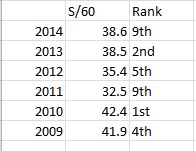 It will be interesting to see how they handle this. Nichushkin was pretty bad in his first year too. The Stars routinely ran with Chiasson parked in front of the net creating a screen. That option isn't going to exist next year. It could open an opportunity for big bodies like Ritchie or McKenzie which would  limit the powerplay minutes for someone like Hemsky.

Hemsky's powerplay ice time has gradually been decreasing over the past six years. Given the contract the Stars just extended Hemsky it seems likely that his powerplay time should go back up, but the recent trend is unmistakable. 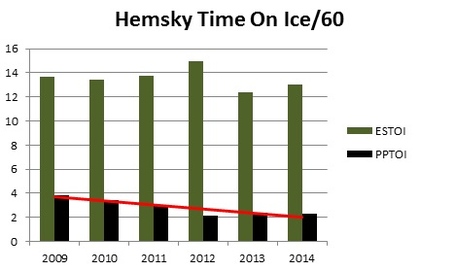 The complete lack of offense generated with him on the ice with the extra man  is probably the logic behind the declining minutes combined with the fact that the Oilers have consistently added young forward talent. For years the Oilers stagnant powerplay went through Hemsky. In Ottawa it clearly didn't, but he fell off a cliff. The Stars will need to figure out a way to get something out of Hemsky on the powerplay to get the most out of the deal.

Fortunately the Stars poweplay was significantly better at generating shots last year than either Edmonton or Ottawa. Adding Spezza can't hurt the Stars power play. Maybe a new scheme can get something more out of Hemsky.

Even if the Stars get little out of Hemsky on the powerplay his deal should be a bargain. He was an elite player when playing with Spezza in a limited sample, and earlier in his career he was definitely a stud. If he can maintain anything close to the level of production he had with Ottawa or even find a little more offense on the powerplay the Stars are going to make some serious noise in the Western Conference in 2015.