A week ago I wrote about Spezza in detail here. Jason Spezza is a good player and he fits everything the Stars need. He is a playmaking center who should theoretically help the powerplay while adding a heavy element of secondary scoring to a team that desperately needed it last year.

What this definitely means is that Cody Eakin will be the Stars third line center as of this writing. The Stars are going to be relying heavily upon Eakin to take some tough minutes. He, Antoine Roussel, and Ryan Garbutt proved to be a very competent line last year. They are going to have to continue to be that competent given what should be heavy responsibilities.

The amazing thing about the trade is that it didn't really cost the Stars much. They are only getting one guaranteed year of Spezza, but the idea of him signing an extension if things go well is pretty realistic. The Stars blew through their reserves of Alexes quickly. They parted with Alex Chiasson, Alex Guptill, Nick Paul, and a 2nd round pick.

If you've been reading here for a while you know Chiasson is someone that has been mentioned often as a trade piece. There is a reason for that. He didn't fit anywhere in the lineup, especially with the emergence of Roussel and Garbutt last season. The immediate success of Valeri Nichushkin, plus the coming of Brett Ritchie, Curtis McKenzie, Scott Glennie, and several center prospects further emphasizes the point.

To get good NHL players back you generally have to move a young cheap NHLer in return with a few other pieces. Chiasson fits that mold, and he does offer the Senators some upside. The problem for the Stars was that he offered less upside than several other options who will be here in the very near future. He was superfluous to the 2015 campaign, and the Stars turned him into a legitimate top six center.

The usual deal for a player in Spezza's situation is something like a first round pick, a young roster player, and a prospect. The Senators missed their chance to pick up a first, assuming it was available to begin with, when the draft passed last week without a trade. The Iginla trade immediately comes to mind. The Flames acquired two college-aged prospects and a 1st round pick. In this trade the Senators acquired two college-aged prospects (one with NHL experience of course) with a mid round prospect from last year and a 2nd round pick in next year's draft.

Some will not be happy with this move because of what the Stars traded away. A lot of Stars fans are still in the bankruptcy mindset. The Stars need to stockpile as much young talent as possible so they always have cheap talent available to fill in. There is something to be said for that.

There's also something to be said for stockpiling a bunch of young talent and using that talent to acquire legitimate help for a team with aspirations of winning the Stanley Cup. Spezza may not work out, but he gives the Stars a formidable one two punch down the middle. They still have all of their core pieces and their core prospects. 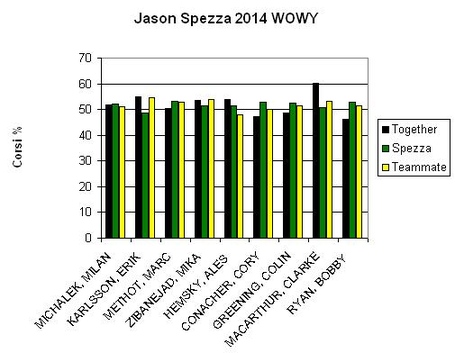 At the end of that post I included this note:

Interestingly, he and Ales Hemsky did work well together. Should the Stars acquire Spezza it would be pretty convenient that a quality winger Spezza played well with is a free agent.

After the Spezza acquisition local hero Mike Heika tweeted this out:

Two names to watch for the Stars in free agency are Anders Lindback and Ales Hemsky.