What do the Corsi ratios of the Dallas Stars look like when we remove the impact of face offs?

One issue that makes Corsi-based analysis challenging is that different players have different circumstances surrounding their results. Match ups, teammates, and zone starts all muddy the picture up when trying to discern the impact of an individual player.

Tyler Dellow of mc79hockey came up with a way to overcome the zone start issue to isolate how a player performs in situations where the impact of a face off has worn off. The two charts below come from the article in the hyperlink immediately to the left of this sentence, and it can also be accessed by clicking on either chart. For the dense among you, the idea here is that you should go read it. 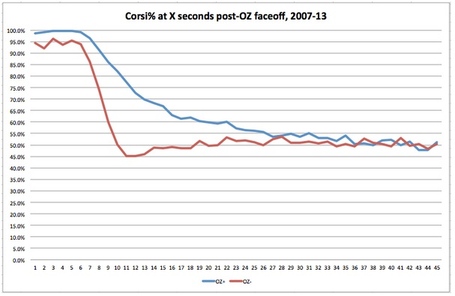 The first bit of work he showed was what happens in the offensive/defensive zone. The chart above flips identically depending on your perspective. One man's offense is the other man's defense. The impact he identifies is that a team winning an offensive zone draw gains a 37 second advantage in Corsi%, and a 21 second disadvantage. Conversely, flip the numbers to see the impact if you are the defending team. 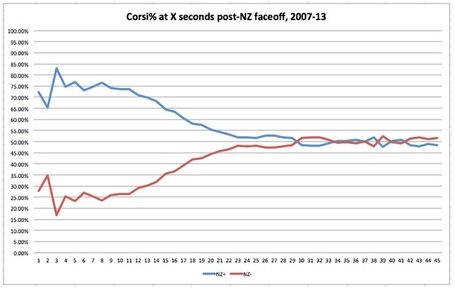 The neutral zone comes together after about 29 seconds. With this set of circumstances identified it allows the opportunity to view what players are doing without the interference of zone start effects. A few days ago Dellow was tweeting out team results, and when asked to provide the 2014 Dallas Stars he did.

This is what the Stars did:

The players at either extreme played limited games.

It's definitely alarming to see Patrik Nemeth at the bottom, but also interesting to see Cameron Gaunce near the top.

The Stars paid 16 million or so for a collective Corsi% of about 47 from Shawn Horcoff, Sergei Gonchar, and Ray Whitney with zone start issues removed. Interestingly, the Stars protected this group defensively. Other players in their general area were generally kept in light match ups too. The Stars appear to have done a good job of identifying defensive issues.

The most surprising name near the top of the list to me is Jamie Oleksiak. He didn't look very good when he was up. In the AHL playoffs he still looks suspect in his own end. What does stick out though is his willingness to go with the rush to create offense. Right now that still leads to turnovers which come back to haunt him. If he learns to clean those turnovers up and play stronger in his own end he could be a useful NHL player.

The list gives us an interesting new perspective we can use to add to the knowledge base of the 2014 Stars. There is some good, some bad. Overall though it fits with what we knew about these players in the first place.