The Dallas Stars are interested in Spezza but are concerned with too much term to other potential centers.

The NHL Draft has come and gone and now we fully turn our attention to a time when the Dallas Stars will work to improve the roster for this coming season, through a heated up free agency market and a trade market with a multitude of possibilities. Jason Spezza, Joe Thornton, Paul Stastny and Vinnie Lecavalier remain the most notable names being bandied about the hockey world this morning.

As we expected they would, the Dallas Stars are in the thick of most conversations when it comes to the big names out there, nearly all of them centers. Stars general manager Jim Nill was on 13010 The Ticket on Monday morning with Norm Hitzges and reiterated that his major focus this summer is on acquiring a No. 2 center and that while they would really like to improve the team -- he's also not willing to break the bank to do so. 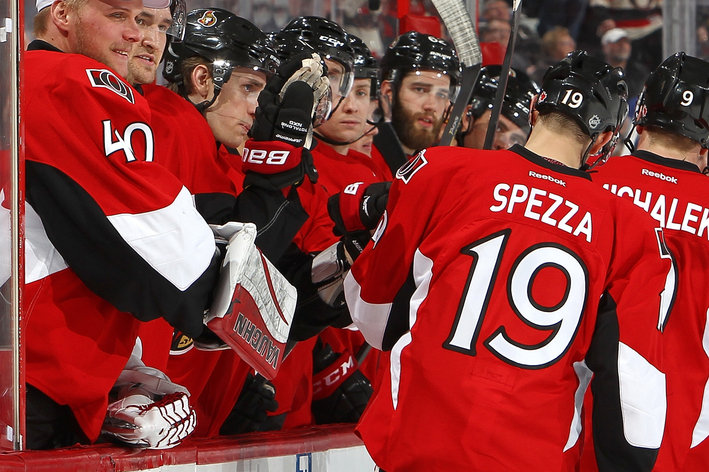 Josh Lile discusses the possibility of Spezza coming to the Dallas Stars.

This has been a theme since the end of the season with the Stars and that feeling has not changed very much the past week or so. The feeling with the Stars right now is they are still playing the patient game and while last season was a big boost forward for the Stars, getting caught up in that momentum and trying desperately to improve in the short term while forgetting about long-term plans doesn't seem to be Nill's style.

Mike Heika had a great blog post this morning that reiterated everything we've been hearing, as well as shouting from the rooftops, that the Stars are just not interested in giving a long-term contract to any of the free agents on the market right now. That includes Paul Stastny, who will most definitely receive max term (seven years) in a free agent contract with a team not names the Colorado Avalanche. While the Stars would love a player like Stastny on the team, it's clear that Nill is thinking about the near future when several young players in the pipeline will be pushing their way up.

"There is a price that comes when you make these trades and we have to be very conscious of that," said Nill on The Ticket this morning. "The nice thing is, we have some great flexibility in that we've got some great kids coming and I want to be careful. We don't want to all of a sudden make a move that gets rid of some of these kids, or closes the door for the next two or three years, or stunt their growth for some of them moving forward."

There's logic to that line of thinking but there's sure to be frustration from Stars fans if the Stars do not improve the team from last season because of a worry about the roster spots in the NHL in two or three seasons -- for players that have yet to even prove themselves higher than the NCAA or CHL. It's a dangerous game to play and after several years of stagnant improvement at the NHL level -- fans are getting antsy.

Even after the blockbuster trade for Tyler Seguin last year.

The organization believes it needs to be flexible, especially with potentially rich contracts coming in the NHL and the possibility that some teams could find themselves hard against the cap. For example, if Chicago really does have to go double digits to both Patrick Kane and Jonathan Toews (they each can become free agents next summer and each could be signed for $10 million-plus a season), then the additional $8 million or so for those two could force them to deal someone else. That could be the same in Pittsburgh or LA or even Anaheim. There is a belief in the league that some very good players could be forced to change teams in the very near future.

So where does that leave the Dallas Stars and the options moving forward? Let's run down the list.

The biggest name and top center on the free agency market has over half the league inquiring after his services and there's no doubt that he'll eventually sign a long-term deal for seven years as he maximizes his value on the open market. Stastny, at his age and ability, is also the sort of center the Stars would love to have to round out their top six.

Unfortunately, it seems that the Stars remain focused on not giving up that amount of term in a new contract and likely won't be major players for Stastny on Tuesday. The Stars just aren't interested in that term, no matter what the actual value of the contract will be. That may change, but it certainly appears that this option is far down the list for Dallas.

We've been hearing behind the scenes for over a week now that the Dallas Stars are interested in trading for Thornton, as his term (3 years) and abilities would be the absolute best fit for Dallas moving forward. Once again, however, this situation has not changed as Thornton has not indicated he's willing to actually leave San Jose.

"The tough part is, these players all have no-trades and they are sort of driving the bus as far as where they go," said Nill. "But we've been in contact with the teams, we're in the mix with some of these guys."

The Sharks could make it uncomfortable for him, and there's rumors he'll be stripped of his captaincy, but right now it appears that while this may have been the top option for Dallas -- there's still no reason to believe Thornton will ever agree to a trade, let alone to Dallas.

With this name hitting the open market after yesterday, there was some talk that the Stars might suddenly change their mind about adding a defenseman. Doesn't seem that's the case right now, according to Jim Nill.

"I'm excited about our back end," says Nill. "When we won the Calder Cup down in Texas, we had four kids down there knocking on the door. They're all very close Patrick Nemeth, was up here a bit at the end of the year, he's ready. Oleksia, the first round pick from three years ago, he's very close.

"Jyrki Jokipakka -- he came out of nowhere last season. We didn't know if he'd even make the team in Texas and he was one of our best defensemen. John Klingberg, played in Sweden last year. He's another guy that has the Erik Karlsson skills, a power play guy and a right shot. We have four kids knocking on the door, the need on defense wasn't the need it was three or four years ago.

"It would be nice to have a center."

Over the weekend this has emerged as the most likely path for the Stars and Jim Nill to follow, as it emerged that only two teams were in on the Ottawa center following the NHL draft:

STL and DAL are the two teams who currently have interest in OTT's Jason Spezza. Doesn't sound like a deal is close.

Also, despite some major confusion over the weekend -- Spezza would indeed accept a trade to Dallas.

Just to clear it up: Spezza would accept a trade to Dallas. There was some confusion. #Sens #ottnews

There are some holdups, however. It appears that the Senators are not too happy with the offers for Spezza, which is likely why only two teams remain on the list, and it's likely the Stars are concerned with the fact that he is only under contract for one more season and there's the risk that he bolts after just one year here.

But that's an interesting risk to take -- how much is one year of Spezza worth, especially with the possibility of him signing an extension should things go well. It's an ideal situation for both player and team, with Spezza wanting the chance to prove himself in a new situation and show he's still capable of earning a decent contract next summer when his current contract is up.

So, will Jason Spezza become a Dallas Stars center? We'll likely find out in the next week or so, if not sooner.