Could Tyler Seguin and Joe Thornton team up to troll the Boston Bruins twice a year?

Joe Thornton has the third most points of any active player.

When Teemu Selanne officially retires Thornton will move to second. If Jaromir Jagr ever retires, Thornton will be leading the pack. He's really good.

His contract belongs to the San Jose Sharks, best known for being perpetual playoff failures despite having significant talent on their roster. The ultimate kick to the stomach came this past playoffs when the future Stanley Cup Champion Los Angeles Kings came back from a 3-0 deficit to knock them out of the first round.

This has made General Manager Doug Wilson seemingly lose his mind.

"We're a tomorrow team," Wilson said Tuesday, using the accepted code for a hockey franchise that isn't considered a legitimate Stanley Cup contender and a harsh adjustment for a San Jose team that has made the playoffs each of the past 10 seasons.

Considering the composition of their roster that's a bit out there, but he goes on:

This is a phase that this organization has never gone into in the past, and maybe should have many years ago," Wilson said.

Despite the fact that the Sharks have been among the league's best franchises since the 2001 season they should have considered rebuilding several years ago? The Sharks aren't in perfect shape long term, but a team starting with Logan Couture, Joe Pavelski, Brent Burns, and Tomas Hertl isn't exactly expansion quality.

But, I digress. If the Sharks want to blow things up the two names that have been thrown out as possible trade candidates are Patrick Marleau and Joe Thornton.

How pretty is this? 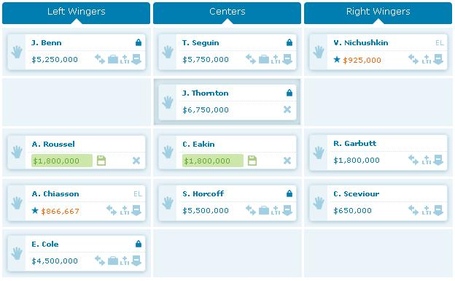 I guess the answer is that it depends.

On the ice there is very little question that Thornton would be an ideal fit. He's a very talented offensive player with top end playmaking ability. He led the league in primary assists per 60 minutes of ice time. Thornton has been a key member of a Sharks powerplay that has led the league in shots per 60 minutes in each of the last five years, and was 5th in the 2009 season.

He makes the players around him better. Brent Burns' Corsi percentage is 20 percentage points higher with Thornton on the ice. 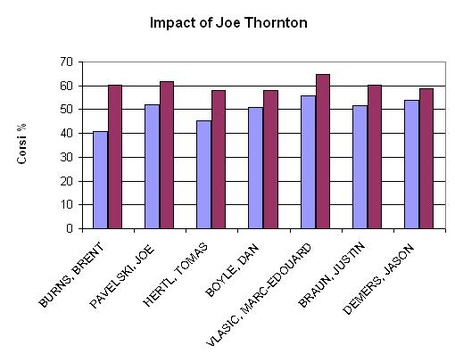 Strategically Thornton fits like a glove. The Sharks used him in some surprisingly tough situations in 2013 compared to how they used him earlier in his tenure. He had a very high quality of competition and surprisingly few offensive zone starts. Fitting him into the Stars attack would be pretty simple. The Tyler Seguin trio and a line centered by Joe Thornton could easily split the difference of the difficult competition, making both of their lives easier.

There is some reasonable concern that with the speed game the Stars play Thornton might be an awkward fit. A roster doesn't need to have 23 burners to fit well together though. If Thornton has some speed on the wings his playmaking ability will still be able to spring the offense with speed more often than not.

That's the good news. The bad news is that Thornton turns 35 next week. He is deep into the decline phase of his career, but still a very good offensive contributor. He's no longer a 90 point plus player. Last season he hit 76 points on the strength of 65 assists. The offense likely isn't going back up. Realistically it's going to keep going down. If you're trading for Thornton this is an undeniable fact for which a GM has to account.

The problem with all of this is finding a price point where both the Stars and Sharks would be satisfied.

If the Sharks really do want to rebuild they're going to want a package of picks and prospects. The Stars certainly have that to offer, but how big of a package is a 35 year old center worth? Recent trades suggest that the package shouldn't cost a prohibitively large amount of talent.

We can see this by looking at some relatively recent trades of big names.

The Pittsburgh Penguins dealt Staal to Carolina in return for the #8 pick in the 2012 draft, Brandon Sutter, and defensive prospect Brian Dumolin. Staal was 24 at the time. The return should be higher than that of Thornton regardless of talent.

The Columbus Blue Jackets essentially traded Rick Nash to the New York Rangers for Brandon Dubinsky, Artem Anisimov, Tim Erixon, and a 1st round pick. Nash is more comparable in talent to Thornton than Staal, but once again he was a good bit younger than Thornton currently is. He was 27 at the time of the deal.

It should also be noted that this deal didn't gut the core of the Rangers. They dealt a couple secondary pieces, a solid prospect, and a first round pick.

Heatley was 30. Havlat was 30. Both were solid offensive players, though Heatley was pretty clearly the better of the two. Both were at similar stages of their careers so the swap made sense from that perspective. A swap of players at similar points in their careers could make some sense value wise for the Sharks in a Thornton deal.

The Flames dealt Iginla to Pittsburgh for Kenny Agostino, Ben Hanowski, and a 1st round pick. The focus of this return was the first round pick. The two prospects certainly have value, but they aren't making the deal. If the Sharks want prospects and picks this is probably the closest to what they can expect in return, though maybe a bit more given the extra control a team will have over Thornton.

The Rangers dealt Marian Gaborik to Columbus in exchange for Derek Dorsett, Derick Brassard, and John Moore. We have a quantity over quality deal. Brassard was the headliner of the return, but he isn't a key piece to a contender.

Let's step in the way back machine. In 2007 the Philadelphia Flyers dealt Forsberg to the Nashville Predators. In return the Flyers got Scottie Upshall, Ryan Parent, and the Predators' first round pick in the 2008 draft. The first round pick once again sticks out as the main source of value.

When the Stars dealt Jagr to the Boston Bruins they received Lane MacDermid, Cody Payne, and a conditional first round pick. The Bruins met the conditions, and the Stars were able to draft center Jason Dickinson. The pick was the focus of the return.

In most of these deals a first round pick of some caliber is understood to be part of the return. The only two that didn't were when the Rangers dumped Gaborik on Columbus and the swap of scorers in Heatley and Havlat. In trying to determine what the Stars could offer for Thornton we can take either the first round or player for player route to find a match.

Assume the Sharks would want the #14 pick as part of the deal. The Stars shouldn't be required to surround that pick with premium talent to finalize a trade. It really shouldn't even take anyone currently on the roster to finish a deal unless the Sharks wanted Alex Chiasson with the pick.

Realistically it would probably take two from the middle tier of the system. Your Jyrkki Jokipakkas, Branden Troocks, Alex Guptills, Gemel Smiths, and Matej Stranskys of the world is the general idea. Would the Stars move two from that group with #14 to acquire Thornton?

Of course, but why would San Jose make that deal? Conversely, why would the Stars offer more? The Sharks need a good return to justify the move unless they really intend to tear that roster down. The Stars, given their position on the win curve, shouldn't be giving away numerous high ceiling assets for a 35 year old center regardless of the fit. A magic beans for Thornton trade, at first glance, seems unlikely unless one side is willing to compromise from those positions.

The less orthodox route is a one for one deal in the mold of the Heatley trade. A one for one trade would assume that the Sharks aren't interested in rebuilding, but are more interested in retooling what they already have because what they already have is pretty good. What they don't have, and haven't had, is a reliable goaltender. What if the Sharks could get Kari Lehtonen?

Last week, based on a simple comment from Jeff O'Neill, we discussed the Stars interest in Ryan Miller. The implication is that the Stars would be willing to deal Lehtonen to fill another need after signing Miller. Trading Lehtonen for Thornton would certainly do that, while emphasizing the next few years as a sincere window of competing for a Cup.

The Stars would almost have to acquire a winger or two on July 1 to get the most out of all of this crazy wheeling and dealing. It should probably be noted again that the Lehtonen out-of-left-field scenario would be reallllly unorthodox and unexpected, even if very interesting.

The best part of all of this is that none of it could matter. Joe Thornton and his brother John have made it known he doesn't want to go anywhere. The chance does exist though. The Blackhawks and Rangers would be natural landing spots for Joe, but the Stars would be an incredible spot for him as he ages too. The Stars could easily pull it off talent wise if the Sharks are listening and Thornton is willing to move.