In the Stars quest to improve every route needs to be inspected. The penalty kill is one route that needs to be double and triple checked. The Dallas penalty kill ranked 23rd out of 30 NHL teams during the 2014 season. if the administration can tweak a few things to improve the penalty kill they would likely see an improvement in their league standing.

We'll leave the system changes alone for now and focus on how the personnel performed. I think too often we focus strictly on defensive ability instead of effectiveness. The penalty kill is a defensive unit in theory, but in practice the cliche that the best defense is a good offense still applies. Do you want a penalty killing unit that is pretty good defensively, but hemmed in 80% of the time? Or, do you want a penalty killing unit that might be a little less talented defensively, but has the ability to generate, say, 300% more offensive chances? I think I'm taking my chances with the second option.

300% might seem outlandish, but I didn't pull that number out of thin air. That's the difference between going from Antoine Roussel to Jamie Benn on the penalty kill in 2014.

Before we dive into the penalty killing skaters I thought you might like to see the two main goalies and Jack Campbell. Mostly I wanted to apologize on behalf of the Dallas Stars and their fans to Campbell. They did him dirty.

Yes, the Stars allowed 20 attempts towards Campbell on the penalty kill in ONE game. If you forgot about that lovely game this is the boxscore. The Ducks scored two goals on those 20 attempts with the extra man in a 6-3 victory, as if we needed to highlight the need to improve the PK any further. In his debut he had an .872 save percentage, but if you remove the scorched earth campaign the Ducks powerplay led against the Stars he had a nice round more pleasant .900 save percentage.

The forward list consists of forwards who got at least 40 minutes of ice time shorthanded. The CE column is Corsi Efficiency. It's just Corsi Differential per minute. The idea is to see which players dig the smallest hole for the Stars when they're shorthanded. This list was a bit eye opening:

Jamie Benn is the king. The league average Corsi Efficiency is about -1.36 for forwards. Benn's was about half that. Some of the credit for that goes to the shots he was able to generate, but teams generally didn't attempt many shots with him on the ice either. His Corsi Against per Minute was about 1.37. Fiddler, considered the superior defensive forward, was at about 1.97.

I'm not going to try to argue that Benn is better defensively than Fiddler. I don't think any of us really know to be honest. The prevailing thought is that Fiddler is better defensively, but he definitely doesn't appear to be as effective on the penalty kill. We can probably account for a lot of that through looking at Quality of Competition. Given the amount of minutes Fiddler plays it is safe to assume he faced the top units.

Fortunately, we don't have to assume though. See below:

The Quality of Competition brings the bigger picture into much clearer focus. But, a graph makes the point even more comprehensible for those of us who are visual learners. 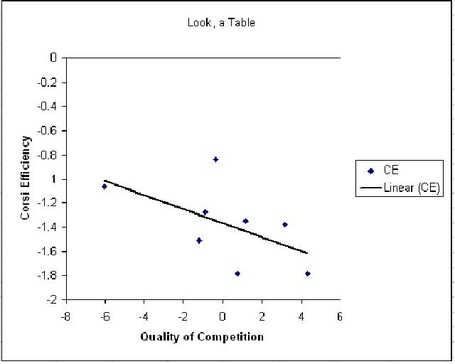 The outlier point at the top is Jamie. The outlier point at the end is Fiddler. If Benn's Quality of Competition increased we would expect him to move closer to the line, but it would take quite a collapse for him to still not be one of the Stars better penalty killers. The other two players who outperformed the rest of the team were Shawn Horcoff and and Cody Eakin.

Eakin was 3rd in time on ice. Horcoff was 5th. Benn was 7th. Moving them up the ladder a little would likely help the unit as a whole out. The least effective penalty killer last year was Roussel. The Stars should consider lessening his burden considerably.

Jordie Benn is at the top of the mountain among defensemen, but much like the forwards Quality of Competition is playing a big part here. The main four guys to focus on here are Benn, Brenden Dillon, Alex Goligoski, and Trevor Daley, but for the table I included everyone.

League average was about -1.36 for defensemen without taking Quality of Competition into account.

Let us mourn for Jamie Oleksiak briefly. That's an ugly stretch of NHL penalty killing. The Stars put him on the ice against well above average competition and he got torched which further emphasizes the defensive zone issues he has.

The four primary defensemen are our concern at the moment. The Stars best penalty killing defenseman when Quality of Competition is included was Dillon. The group as a whole was still unimpressive. 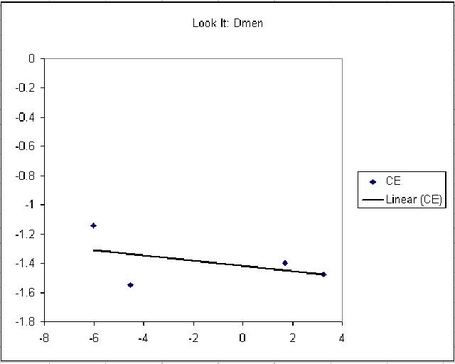 The one guy to really focus on defensively is Daley. He's the guy in the bottom left. He had relatively easy competition, but got into more penalty killing minutes per game than Dillon. It would make sense for the Stars to get Dillon more penalty killing opportunities at the expense of Daley next year. It might make sense to replace him on the unit entirely.

The Stars can get more out of him. Using him more often on the penalty kill runs the risk of tiring him out. This is an unquestionable truth. Several people pointed this out the other day. However, I think that should be a secondary concern. It doesn't seem likely.

Secondly, in 2014 he averaged 19:09 minutes per game. In the shortened 2013 season he averaged 19:55. Even if you don't push him back to 20 minutes per game you can still significantly increase his penalty kill time. If the Stars were to add a mere 30 seconds of penalty killing time per game to Benn's ice time he would go up to 19:40 per game, but he would almost double the amount of time he spent killing penalties last season while also limiting a less effective penalty killer.

Let's play pretend for a minute. Let's pretend that Benn getting more minutes on the penalty kill wouldn't decrease the efficiency rate at all. It would likely change some since he would be facing higher competition, but again, pretend. Let's also pretend than Fiddler wouldn't improve by not being the guy saddled with the most difficult penalty killing time.

The table below shows the impact of increasing Benn's penalty killing minutes by a mere 30 seconds a night by taking that same time away from Fiddler. 2014r is what really happened. 2014a is the alternate world where Benn takes 41 minutes away from Fiddler.

The Stars were out-Corsi'd by 50 with Benn on the ice. That number jumped to 265 for Fiddler. If you move those minutes to Benn you're looking at a net decrease of 39 Corsi attempts against. The drop of 39 Corsi events would save the Stars 2-3 goals or close to a full win.

In the real world where the rates fluctuate the impact is probably closer to 1-2 goals.

The other apparent quick solution the Stars could employ is swapping Horcoff for Roussel on the PK. The table below uses the same methodology as the previous one except I completely swapped the minutes of Roussel and Horcoff.

In alternate 2014 the Stars would have saved 15 attempts towards the net. That isn't a huge total, but it isn't insignificant. It would have saved another goal over the course of the season. Given that Horcoff already faced a higher level of competition than Roussel as is there is a greater than zero chance that the impact would have been more significant.

Every little bit helps when you're trying to get to the top. The Stars could make two personnel changes to the penalty kill for 2015 without a single roster move that could add at least a full extra win to their total. If Nemeth is legit substituting him for Daley could also improve the penalty killing. Any outside personnel brought in would just add to the happiness.

The Stars would do really well to add a core piece or two with the ability to kill some penalties. However, they have the talent based on last season to bring a mediocre unit into the top half of the league simply by tweaking how they do things.