Could this really happen? Is this the Illuminati at work?

Editorial Note: I am not suggesting that Jeff O'Neill is, was, or ever has huffed literal paint. I meant metaphorical paint.

Friend of the internet Hope_Smoke on Twitter transcribed an interesting quote from Carolina Hurricane and Toronto Maple Leaf Jeff O'Neill:

Jeff O'Neill "Dallas, Winnipeg make a play for Ryan Miller. It's like people think he just can't play anymore, it blows my mind"

It's certainly possible that O'Neill was huffing paint. He has been known to say...interesting...things. But, for the sake of this post, let's assume he is saying that the Winnipeg Jets and Dallas Stars are going to make a play for Ryan Miller.

In this scenario the Stars would be trading Lehtonen.

Would Miller be an upgrade on Lehtonen?

He isn't much worse though.

When looking at goalies it is often beneficial to look at their even strength save percentages. They remain pretty constant year to year. This is the four year comparison of Lehtonen and Miller.

The big thing to consider is age. When Miller's next contract kicks in he will be 34. Lehtonen turns 31 in November. Both goalies are in, or entering, the phase where their performance should decline. Cam Charron wrote about the goalie aging curve for NHLNumbers last year. He put this chart together to map the change in even strength save percentage by age: 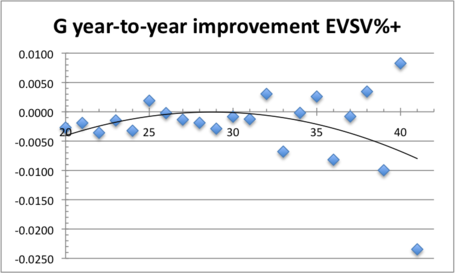 It's pretty obvious that up until about age 30-31 we can make reasonable predictions about what a goalie is going to do. After that goalies go nuts. Lehtonen is entering the phase where he could fall off a cliff or be elite. Miller is firmly in the area where we should expect the unexpected. Replacing Lehtonen with Miller would introduce an extra level of uncertainty for 2015 that the Stars would have to protect against.

Why would the Stars do it then?

Lehtonen is signed for a cap hit of 5.9 million dollars for the next four seasons. If the Stars could get a comparable goalie with a little more uncertainty for a lesser cost it could make some sense with the caveat that they have to improve other areas of the roster to mitigate risk. If they could get Miller under contract for 2-3 years instead of four it would set them up to hand things over to Jack Campbell around the time his second deal is up, assuming his develops.

Why would Miller accept a contract in the five million per year/three year range? His last contract had a cap hit of 6.25. That would be a significant pay cut. He had a lackluster run with the St. Louis Blues, but if you already thought highly of him that short run of games isn't going to significantly alter your views unless something is obviously wrong.

Miller taking a deal where he goes short on years but higher on yearly salary does seem like it would make more sense if this scenario has legs. The shorter the better for the team given his age. The Stars would really be in an ideal spot if they wanted to land Miller given their cap situation. They could easily hike up the annual pay and shrink the total yearly commitment without hurting the rest of the roster. A two year deal where Miller takes a total salary of 13-14 million isn't going to cripple the Stars even given that it's an overpay.

And I don't know if you've noticed, but old goalies aren't really signed long term. Some of the goalies on that list will creep into old age on their current deals, but they will do so at gradually decreasing salaries. The contract demands for Miller could conceivably end up being reasonable.

The reason why this can't be outright ruled out is because once Miller is under contract the Stars then have the ability to improve other areas of the roster by dealing Lehtonen. He's about to be 31 with a consistent history of solid play. His contract is reasonable, if a bit longer than ideal. Several teams need goalies, including several teams who would have a hard time luring them as free agents.

Anaheim, Edmonton, Ottawa, Vancouver, Washington, and Winnipeg could all use him. The Stars aren't going to remake their roster by trading Lehtonen, but they could add a valuable roster player or more ammo for making other deals. The Miller trade to St. Louis is a recent example, but it was a gross overpay. Cory Schneider, a younger, better goalie than Lehtonen, was recently dealt for a top ten pick.

You're probably looking at a deal where the Stars pick up a roster player of equivalent value though, and that's where things get interesting. The Senators are shopping Jason Spezza. Would a Spezza for Lehtonen deal improve the Stars with Miller in tow? What about a deal involving Jordan Eberle or Nail Yakupov from Edmonton? Ryan Kesler was available at the deadline and the Canucks now need a goaltender. Does a deal involving Evander Kane or Dustin Byfuglien get your blood flowing?

When you think about the potential return for dealing Lehtonen the scenario seems less ridiculous. It's still way out there, incredibly likely to not happen, and may not even be a twinkle in Jim Nill's eye. But, if Jeff O'Neill didn't misspeak or hallucinate and the Stars are interested in Ryan Miller then we are in for quite an exciting and tumultuous summer.