Share All sharing options for: The Texas Stars are the 2014 Calder Cup Champions: Highlights, Quotes & More

The Texas Stars won the 2014 Calder Cup Championship on Tuesday night, thanks to their third-straight overtime win and sixth of the playoffs when Patrik Nemeth's incredible individual effort won the game. 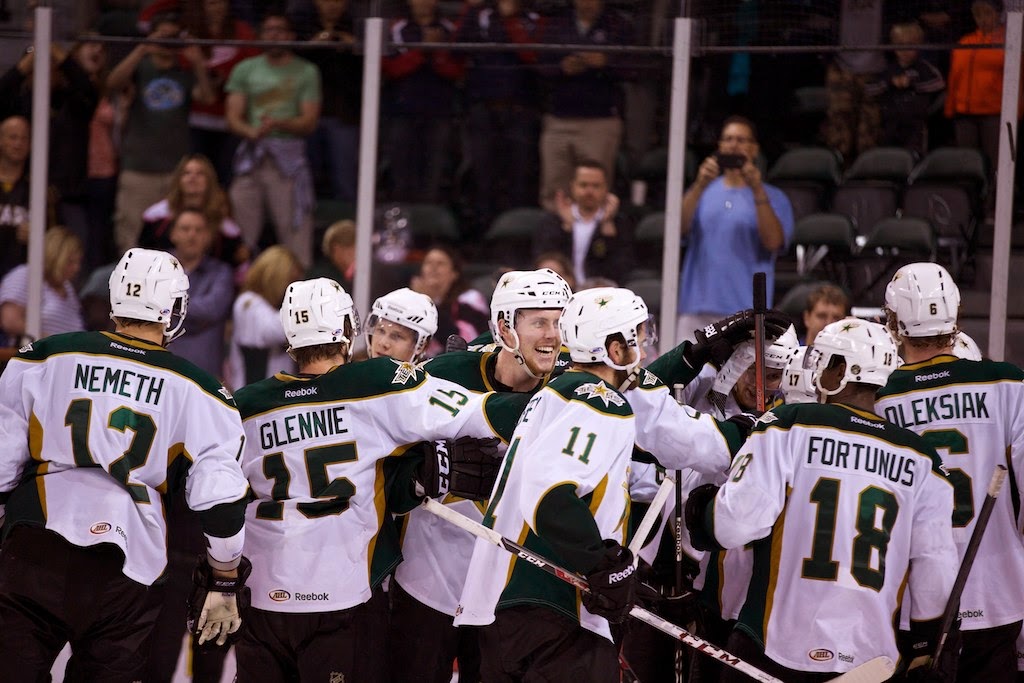 The Stars had controlled play and staked themselves a 2-0 lead with goals by Mike Hedden and Brett Ritchie, before the St. John's IceCaps made their own roaring comeback to eventually take the lead in the third period. The Stars would push back tremendously, however, and eventually broke through goaltender Michael Hutchinson when Hedden had a pass deflect off his glove and into the net.

Nemeth would win the game 15 minutes into overtime when Nemeth took the puck from his own blue line, made a dastardly move to get around a defender and then snuck a backhander far side over Hutchinson's glove -- one of the best goals you'll ever hope to see.

Five years ago the Texas Stars used a veteran-heavy team and a young coach -- along with a future superstar forward -- to make an exciting run to the Calder Cup Finals, only to fall just short. Now, in 2014, the Stars have finally broke through but this time with a team fortified with young and exciting players found through the draft and scouting, as well as a group of talented AHL veterans that should also get a shot at the NHL next season.

We'll get more into the long-term impact of this win, but for now let's celebrate what has been an incredible season for the Dallas Stars organization as a whole, and specifically the Texas Stars -- the best team throughout the season and the playoffs and the deserving winners of this championship.

Congrats to Stephen Meserve of 100 Degree Hockey, one of the best AHL writers you'll ever hope to find and who operates one hell of a website covering the Texas Stars.

Big congrats to everyone with the Texas organization; I know many of them personally and they all work so hard, it's great to see all of it pay off.

Congrats to the Texas Stars fans, some of the most loyal and vocal hockey fans you'll find anywhere in North America.

Congratulations to Willie Desjardins, who coached the hell out of this team the past two years and will likely now make the big jump to the NHL. He deserves it.

Be sure to check out Morin's interview and how he ducks out to get the Cup. Awesome.

Thanks to Mark Stepneski, we have the game-winning goal with Owen Newkirk's play by play, rather than those homers above.

"One of the trademarks of an elite organization is their ability to train and develop players in a winning environment. The Texas Stars have done a great job with all of these facets this season and I know firsthand that the rewards from winning the Calder Cup will have a profoundly positive impact for each of our prospects and our team in Dallas as we move forward. We congratulate Scott White, as well as Willie Desjardins, the players and the rest of the Texas Stars staff for an outstanding season."