Is he washed up, or a potential solution to the second line?

Share All sharing options for: 2014 NHL Offseason: Reunion In Store With Brad Richards?

Brad Richards left the Dallas Stars for the New York Rangers after the 2011 season on the heels of throwing down 77 points in 72 games.

Three years later (and 33 million dollars richer to this point) Richards is likely to be given a compliance buyout by the Rangers making him a free agent. John Tortorella scratched him at times in 2013. Alain Vigneault had him skating on the fourth line during the Stanley Cup Final. Two coaches with different styles are essentially saying he isn't a core player anymore.

Well, I'm not entirely sure anything happened to Richards. He has gotten older, of this we can be certain. But perhaps our perspective of what Richards was in the first place was off.

The line he centered with Loui Eriksson and James Neal for the Stars was the focal point of the offense during his two full seasons with the club. The interesting reality for this line is that the sum of the three players playing together were more valuable than their individual parts.

The table of Eriksson values shows a similar relationship. The most jarring number is the 39.5 Corsi% Richards put up without Eriksson on the ice.

The ultimate point to take away from these tables is that Richards saw his game improve when those two were on the ice. He got better with good players. Weird, eh?

Richards has been getting criticism for his play with the Rangers partially because of a drop in production, but as we know he can't force his teammates to score goals. The graph below shows the on ice shooting percentage for players with Brad Richards on the ice the last five years at even strength. 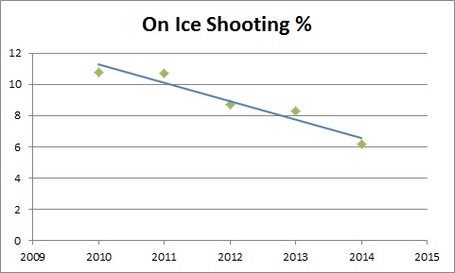 In 2010 the Stars shot about 11 percent with Richards on the ice. In 2014 the Rangers shot about six percent with Richards on the ice with steady decreases since his signing. Obviously this isn't good, but how much of that is really his fault? Richards is known as a playmaker, but if his teammates aren't scoring with him on the ice he has either deteriorated as a playmaker or his teammates PDO'd him hard.

Fortunately we can look at the shooting percentages of the players he played with the most over this time span. We know that with the Stars he predominantly played with Eriksson and Neal. With the Rangers his most frequent teammates in two out of the three years were Carl Hagelin and Ryan Callahan. Marian Gaborik and Rick Nash top the list in 2013.

Hagelin and Callahan aren't comparable to Neal and Eriksson. Nash and Gaborik are very talented though. What we want to see is if there is a consistent impact on the shooting percentages of his most frequent linemates when they play with him compared to when they don't. With the Stars there was a considerable increase.

The first table shows the shooting percentage change for Neal and Eriksson with Richards on the ice compared to when they didn't have him out there.

The Rangers can boast similar results in 2012 and 2014. Hagelin was quite a bit more efficient with Richards in 2012 whereas Callahan was more efficient with Richards in 2014. The shortened 2013 season was unpleasant for three of the four players. 61, Rick Nash, and 10, Marian Gaborik, are the main focal points here though as they were his top two linemates in 2013. They had pretty different results.

Shooting percentages are finicky, but there does appear to be a Richards playmaking impact. The biggest impacts came with Marian Gaborik, James Neal, and Carl Hagelin.

So, it does appear that he was still making a positive impact despite being in the doghouse as a Ranger. The 7.7% personal shooting percentage he had on 259 shots in 2014, the most he has attempted since his last year in Dallas, is his lowest since his age 22 season in 2004. I wouldn't bet on it hovering around that level in 2015.

Is Richards as bad as he seemed to be with the Rangers? I don't really think so, but I never thought of Richards in the terms one of our esteemed Jewels From The Crown colleagues used:

Yeah, I think I agree. James Neal and Loui Eriksson helped Richards set an impossible standard to measure up to. When he didn't, but still made a demonstrable impact, his star fell quickly to the point that the Rangers are going to probably pay him to leave.

The question is who should pursue him now. The Stars do have a need on the second line, but as of now what do they have to put around him? Alex Chiasson looked great out of the gate in 2013 with a playmaker like Ray Whitney. Putting Richards with him would be an interesting proposition. Brett Ritchie flanking Richards could be interesting given his skill set, but the Stars probably can't begin counting on a rookie in early July while selling an improved team for next year.

Without another significant top six addition how would this situation be much different from what he dealt with in New York? Sure. the Stars play more of an offensive game. That definitely should help. But, they would still need to put some more talent around him to get the most out of his playmaking abilities.

Given the way he is likely exiting New York and the failure that has been Vincent Lecavalier in Philadelphia, I can't imagine Richards getting the contact Lecavalier signed last season. At 3-4 million per season for 3-4 years would Richards be a worthy investment? I think so, and I think he would definitely fill a need. But he can't be the first choice given the question marks surrounding him. It's no given that he rebounds in any meaningful way given his age despite the evidence suggesting he is still useful.

Let's be honest though, if Jim Rutherford has a lick of sense then Richards isn't leaving the Metropolitan Division. How can the Penguins not reunite Neal and Richards while using Evgeni Malkin with Sidney Crosby?

That signing is almost inevitable, right?