If Prices are Too High, Can Dallas Stars Rely on Cody Eakin at 2C?

Can Cody Eakin carry the load as the second-line center while prospects marinate?

Share All sharing options for: If Prices are Too High, Can Dallas Stars Rely on Cody Eakin at 2C?

Yesterday I meanderingly discussed what the Dallas Stars' path on the blue line might be if they're unable to land any big fish, either via trade or free agency - a fairly likely scenario.

Today's meditation focuses on the center position. Wait, didn't we just do this?

Tyler Seguin, Shawn Horcoff, Rich Peverley. All acquired about 12 months ago - all possible candidates to play center in our minds at the time. With Vern Fiddler still on board and Cody Eakin still somewhat of a mystery, it seemed as though they were set down the middle. The position had been completely revamped in a short period of time.

We wondered at who was a true "number-two" center in that group in the preseason, and of all our September prognostications, that one proved most true. They didn't really have a prototypical second-line center, though that can mean different things to different teams.

But as always, and the purpose of this little discussion, we must consider what happens if they do nothing. The prices for centers are notoriously high. Some of the names for consideration out there are a little on the well-aged side. The more prudent thing might be to just wait.

"How long?" the masses will cry. Where is Radek Faksa? Where is Jason Dickinson?

Marinating. Marinating and marinating. They'll be along when the time is appropriate. Those are not options for next season.

Vern Fiddler will test the market, and my money is on someone giving him a year or two on the top that the Stars may not be willing to touch. That being said, all he's done here is take his lumps the last two seasons and then work hard to carve out a bigger role. He plays his best hockey down the stretch. They love him in the locker room. So there's certainly an argument for retention.

Shawn Horcoff's salary is prohibitive for a move - so is his NMC/NTC. He'll be here, and the guess is that fourth line mintues and special teams duty on the PK are in his future. Like Gonchar, Ruff sort of found out where he could put Horcoff for positive contribution on the roster and I'd expect that to continue.

It's that darn second-line center position that is so vexing. Cody Eakin, Ryan Garbutt and Antoine Roussel make a fast, attitudinal, agitating bunch that can score at a clip you'd like to see in a really, really good third-line. They check opponents like a pretty good third line. If they were your third line because your second line is more of an offensive threat - boy, you'd be living pretty large.

But if the prices are too steep and the upgrades available only marginal, can you live with Cody Eakin as 2C and get something in the market for a better price to put at 3C if Fiddler leaves?

35 points for the Ginger Ninja this year - 20 home, 15 away. He had an interesting start to the year centering Alex Chiasson and Ray Whitney for months before meandering for a while before landing between 21 and 16. 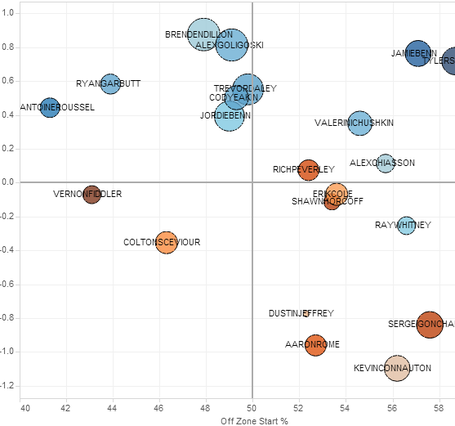 He started closer to his own net on average - and far more frequently than did Jamie Benn and Seguin. He kept his bubble blue (positive possession) and he played against above average competition.

He can get lost in the defensive end at times and go a little while between offensive contributions, but all of this is serviceable, and I think the Stars believe they can live with it if they must. 159 games of NHL experience and just 23 years of age - he still has room to grow. He was also pretty darned good in the playoffs, lest we forget.

This will also be his first consecutive season under the same head coach since his last year in juniors in 2010-2011. (Kootenay, Washington Capitals, Hershey Bears, Dallas Stars (Gully), Texas Stars, Dallas Stars (Ruff)...)

A splashy acquisition at center seems more likely than one at defense. They've publicly stated it as a priority. But can you live with Cody Eakin at 2C next season if you have to?

If you're demanding a huge leap forward next season - maybe not. If you're patiently building things for the long term success of the franchise - probably.