New fans, old fans and everyone in between had the AAC rocking like never before.

Just six years after moving to the state of Texas, a land where no one believe hockey could work, the Dallas Stars had built one of the loudest and most fanatic arena atmospheres in the NHL. Those that remember games at Reunion Arena during those years will always reflect on just how intense it would get, how incredibly raucous the fans would get in the stands.

The "Eddie" chants. The taunting of Hasek, or Roy or any other goalie that dared to allow a goal.

That incredible, timeless horn. The AAC horn is good, but that Reunion blast was legendary.

The insane skill on the ice; witness one of the most incredible shots you'll ever see on Brett Hull's game-winning goal late in the third period.

It was this, all of this, that helped build a passionate fanbase. The fact the Dallas Stars were successful on the ice was key, but anyone who happened to step foot into a Stars game in downtown Dallas instantly became a fan for life.

With that success came change, however. A world-class team needed a world-class arena, and the American Airlines Center was born. 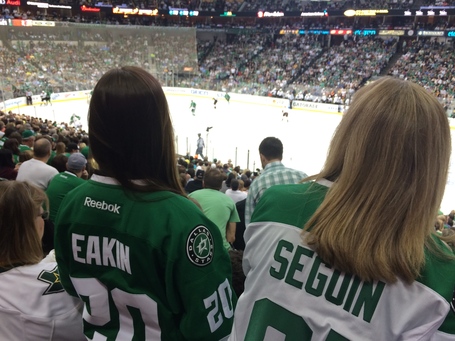 Generally considered one of the better arenas in the NHL, the AAC is state of the art and looks incredible both on the inside and the outside. It's spacious, both in the concourses and inside the arena itself - allowing for more seats and outstanding viewing angles but in the advent of the space that intimate intensity of Reunion was suddenly lost.

With time came more change, this time on the ice and eventually in the front office. Hard times befell what had been a very committed ownership and suddenly money was no longer available to help mend an aging and ailing roster. With longterm success had come apathy of a sorts, in a town where most attention is only reserved for those that are winning meaningful games - and the Dallas Cowboys.

There were games where the AAC was barely half full, no matter what the official attendance numbers may have said. Games where the Stars were competitive, seasons where the team never tanked and never truly failed - missing the postseason by just a game here or a game there in almost all of the previous five seasons. A big reason for the drop in the paying fanbase was tied to the state of ownership of the team, where a franchise heading towards bankruptcy was owned by a consortium of banks and operating at minimum capacity. What reason, most wondered, did they have in investing in a team with such an uncertain future? 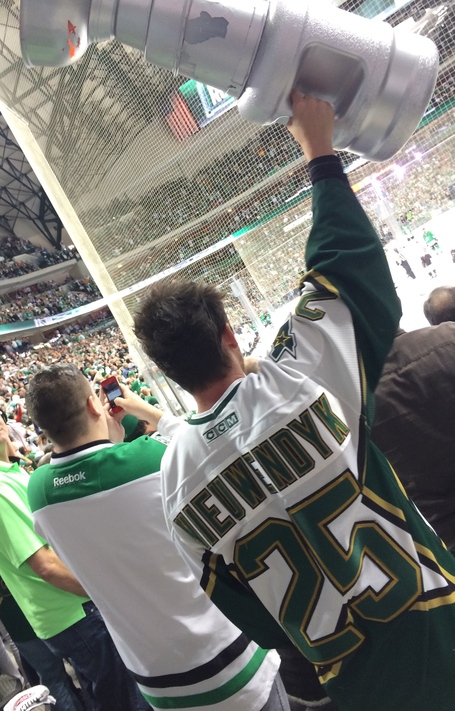 With Tom Gaglardi came a dedication to success and a willingness to do what it with take to rebuild the franchise into what it once was. Tough decisions were made. And the fans responded, although a lockout-shortened season threatened to take away the momentum that had been built.

Then, over the course of one summer, the Dallas Stars completely redefined the franchise both on and off the ice.

Suddenly, it wasn't just blind hope that was dragging the fans along with each game. Now it was faith in a team and an organization, a faith and trust that was built over the course of a season as the Stars proved again and again capable of fighting back and doing what it took to win. Along the way, the AAC was filling up more and more and getting louder. There was an anticipation in the air; that perhaps this season could be different and all of those seasons of struggle and blind dedication and half-empty arenas would be worth it.

Even if it's just a short series, making the postseason is now validation for all of the strife over the season. Now, this goal is valued as the prize that it is seen as - now we've all experienced and grown appreciative of how making the playoffs should never been taken for granted.

The final month of the season and into the first round series against the Anaheim Ducks, each progressive game was louder the one before. The celebration over making the playoffs in a dominating 3-0 win against the St. Louis Blues was rapturous, and suddenly for the first time in six years Dallas was hosting postseason hockey once more. 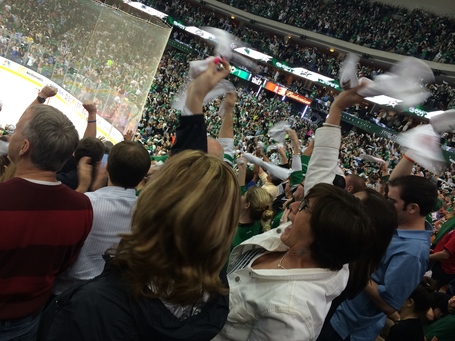 No one knew what to expect when the Stars returned to Dallas from Anaheim, trailing 2-0 in the series after a pair of very tough losses. Could this young and inexperienced roster fight back against the top team in the Western Conference? What will the atmosphere be like at the AAC, with a revitalized fanbase suddenly buying up every seat in the house?

It's tough to believe anyone really anticipated what that first playoff game would ultimately be like.

There was something different about the atmosphere in the arena this time around, an electric charge that ran through the fanbase that fed directly to the players on the ice. There was a definite feeling of symbioses developing between crowd and team and the fans suddenly felt as if they were having an impact on the game as well.

It's interesting to be a part of that swelling feeling inside a sports crowd. Perhaps it was the long layoff between meaningful hockey games, perhaps it was finally not taking for granted the success the Stars were enjoying -- but that first home playoff win in six years suddenly ignited a level of attention and intensity not felt for quite some in the city of Dallas.

One theory in regards to the sudden rise in intensity level at home is that the fans became a reflection of the team on the ice. These new-look Dallas Stars were young, speedy and in-your-face hockey players that many feel were the most exciting young team to watch in all of hockey. The postseason bore that out, especially at home, and the fans fed off of that young and intense energy.

The Reunion days were incredible and will likely never be truly return, but this new postseason energy at the AAC was something altogether incredible in its own way. There was a hostility in the air, mostly due to the opponent, but there was also a very palpable sense of hunger as well - the fans were hungry for this moment, for this opportunity to experience the most entertaining sport in the world at its highest level. 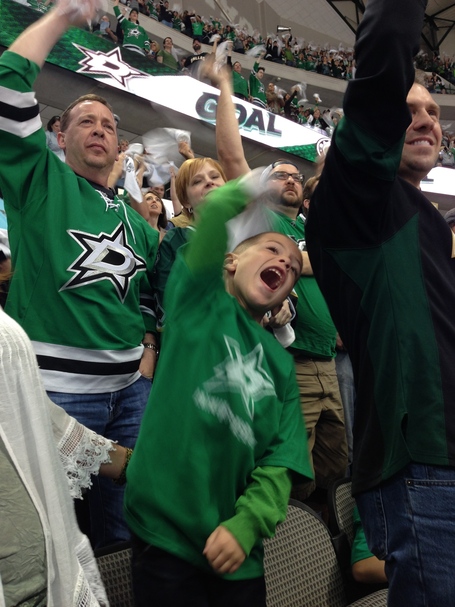 Walking through the crowds during the playoffs it was clear to see how the fanbase had changed over the years and what was fueling that revitalization. There was suddenly a large swath of the fanbase made up of a younger adult generation - adults that would have been teenagers at best when the Stars won the Stanley Cup. Adults who were now bringing their young children to games, kids who will want to play hockey themselves after seeing their heroes on the ice. This is how the Stars built the fanbase up in the 1990's and it's happening once more, a young and entertaining team building a following of families and young adults who become dedicated to the sport.

What was perhaps most rewarding is that the revitalized AAC atmosphere was getting a lot of attention both nationally and locally. It was impossible to ignore that the Stars were an organization on the rise, with both the team and the fans suddenly putting Dallas back on the hockey map.

Local media that had for too long seemingly ignored the Stars were suddenly tuned into how incredible playoff hockey could be; it's tough to think about but it had been exactly 15 years since the Stanley Cup win and the good graces of that championship had long been lost in a very competitive sports landscape. Yet with a young and talented team, suddenly you had Mike Ryhner on The Hardline discussing the merits of Antoine Roussel and how important Ryan Getzlaf is to the Ducks when he had to miss a game.

The Stars were able to build off of the charged atmosphere at the AAC and the coaches and players alike would quickly acknowledge how important that was to their success. The team feeds off the energy created by the crowd and these players and these fans are now connected like never before - there is an intimacy between this Stars team and its fans that is unmistakable and it has grown in a very short time.

The momentum from two big home wins carried over to Game 6, coming just days after a disastrous loss on the road in Anaheim. The atmosphere was more charged than ever before and the Stars once again fed off of that, and carried a two-goal lead into the final minutes of regulation. Until that point, the game was one for the ages for Stars fans. An early two-goal lead set the tone for the game, and the crescendo in the building peaked when Corey Perry was upended along the boards by none other than Alex Goligoski. 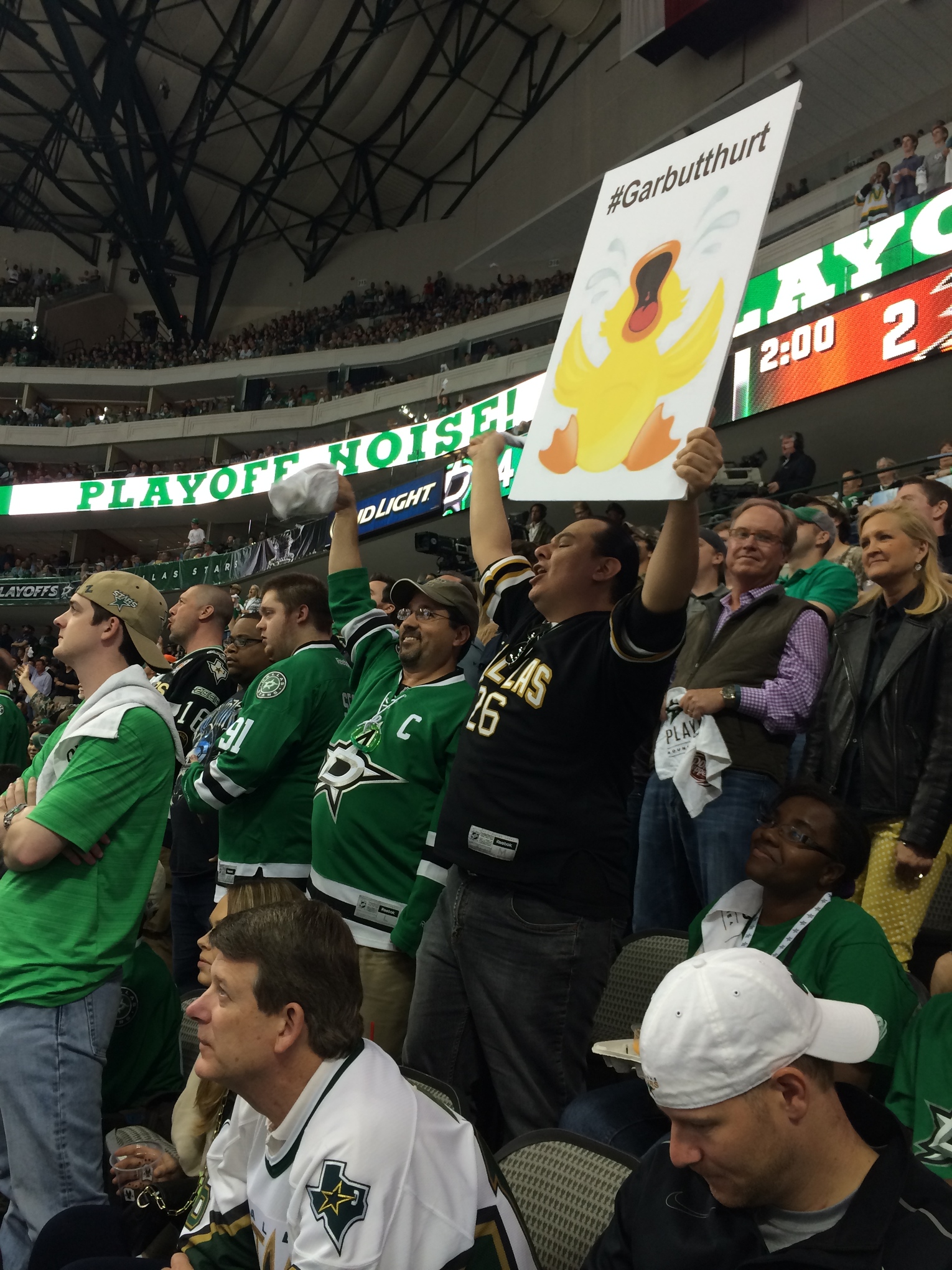 There was such joy in that moment. Such unabashed excitement and sports delight that had everyone believing that destiny was calling and perhaps this could be a magical playoff team after all. That feeling is what sports is all about, and it transcends just those present at the AAC - it feeds into every Stars fan all around the world, watching on TV or on their computers or listing over internet radio. That roar heard over the speakers is felt by every fan wearing Victory Green and for just one moment there was nothing that could go wrong in our world.

A young and inexperienced playoff team fell victim to that inherent rawness that had got them to this point and in the course of just a few short minutes all of those good feelings were gone. The intensity of the AAC had become an eerie and unsettling quiet that descended upon the crowd. Yet that hunger and intensity remained, behind the sadness and frustration over such an incredibly bad end to one hell of a fun season.

While fans slowly left the AAC that night, there was a sense that while a goal was reached nothing was truly accomplished and there is a job left undone. This is a Dallas Stars team that has begun a new journey, with a revitalized fanbase behind them all the way and this past season was just the first big step on that path.

The days of the shaking of the rafters of Reunion Arena are far behind us, yet now a new generation of Stars fans has tasted what was felt in 1999 and 2000 and 2008 and more importantly - the players have tasted that as well. They know what it takes to get here and they know how special it can be.

It can be pretty special.