How does the Stars salary cap situation shape up as we begin the offseason?

This is that point of the year where the Stars are no longer playing hockey.

Other less entertaining teams will still be playing hockey for the next six weeks or so.

During those six weeks and the few after those leading into the 2014 NHL Draft and July 1st Free Agency Spectacular we will need to work on getting our minds right for the possible changes coming to the Stars roster for the 2015 season. Starting us off is a top down view of the salary cap picture.

In a dystopian world where the apocalypse has rained hellfire down on this regrowing fanbase the Stars technically have enough forwards in place to not need significant additions.

Once the Stars come to terms with Cody Eakin and Antoine Roussel they will have 12 forwards under contract at the NHL level.I included Curtis McKenzie on this list because he has no business playing in the AHL next season.

The Eakin and Roussel deals shouldn't add more than five million in salary commitments to the Stars. Realistically, I can't see either one getting much, if any, more than Ryan Garbutt signed for earlier this year.

Defensively the Stars have eight NHL defensemen under contract again with several prospects in the AHL. 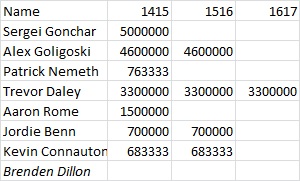 Brenden Dillon is the only notable free agent of the group. I pegged the Dillon extension at about 4500000 per year for around six years based on the extensions for Roman Josi and Slava Voynov. That's probably a bit on the high side given the year he ended up having so for the sake of the discussion we'll pencil him in for 3500000.

The goalie situation is pretty straight forward. Kari Lehtonen is in net. There is no backup.

They're going to need to find a backup from outside of the organization. Counting on Jack Campbell next year as a backup after this season showed how critical a backup is for this team would not be the ideal scenario. Campbell also needs more experience for his own development after missing so much time this season.

The total picture below is how things currently sit without extensions for Roussel, Eakin, and Dillon.

If you hand out about seven million in extensions for those three the Stars have about 13 million dollars in cap space.

Jim Nill is going to need to make some moves to improve the roster so space is going to need to be maximized. Compliance buyouts could be a route he takes. Erik Cole would seem to be a prime candidate after struggling in the second half of the season and being a healthy scratch for two playoff games. That would free up 4.5 million in available cap space.

Shawn Horcoff is another candidate, but after his inspired playoff run why bother? He can be an asset down the line up on top of being a good locker room presence.

Sergei Gonchar is a name to watch, but not as a compliance buyout. Only contracts signed before the lockout are eligible for compliance buyouts. It would be hard to imagine that the Stars want him back though so his name could come up.

One final cap situation to consider is that of Rich Peverley. His situation is still in flux as he recovers from the scary cardiac situation from late this season. If he decides to retire or needs to go on LTIR the move will free up his 3275000 in cap space to use elsewhere. The Stars would prefer to use it on him of course, but it is worth noting that his situation does make an impact on the cap.

The insanity will begin in earnest when the Stanley Cup Finals conclude, but this is where we currently stand. The Stars are in good shape, but work needs to be done. Knowing Nill they probably already have scenarios A, B, C, pi, and Omega mapped out. If this summer is anything like last summer it should be fun to see what he has in store.