How did Jeffrey do after being picked up on waivers from Pittsburgh?

Once again it's that time of year here on Defending Big D where we take a look at each player that suited up for 20 or more games this season (and finished the season with the team) - and take a look back at their season. What was good about it, what wasn't so good, and the lasting impression they left us as we go into summer.

The Dallas Stars claimed Dustin Jeffrey on waivers after the Pittsburgh Penguins placed him there November 17th, 2013.  The Stars weren't in much of an injury pickle at the time- though there were questions about Vern Fiddler's future with the club at the time.

"Our scouts have been watching him, and they like him," general manager Jim Nill told media at the time. "He's versatile, he can play center or wing. He has the skill to play up the lineup and the size to play down the lineup. He has a lot to offer, and we think he just needs a better opportunity."

So how did he do?

When I look back at an entire season I like to see how a player was deployed. This gives us a pretty good idea at where the strengths and weaknesses were- but just as importantly, how the coaching staff saw them. 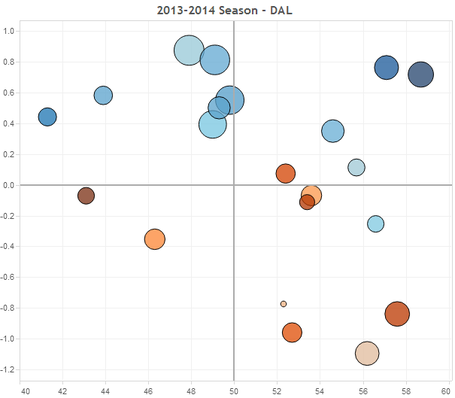 We'll get into this chart as a whole in the coming days. It's something I'd really like to discuss. For now we'll just talk about Jeffrey.

Can you see which dot represents his contributions this season? Hint: It's the smallest one- Through no fault of his own.

It's a tiny dot, meaning he played pretty small minutes, as you know. It's below the x-axis, indicating that he saw, on average, a very low level of competition when he did make it out there. It's to the right of the y-axis, indicating that Lindy Ruff chose to start him, more often than not, as far away from Kari Lehtonen and the Dallas net as possible. It's also orange, indicating that Dallas' opponents had the better (much better) of the possession metrics while he was on the ice.

In other words, this paints the picture of a fourth-line rookie (well, not quite, he has over 100 NHL games now...) deployed by a coaching staff heavily leaning on its top three lines. Ray Whitney was put in this boat along with Chris Mueller- Sometimes Val Nichushkin. Sometimes Alex Chiasson.

Nevertheless and to his credit, the scouting staff liked him enough to pick him up on waivers. The coaching staff liked him as an option over many in Cedar Park. There's something to be said for that, and they probably liked his experience over the other options.

His contract is expiring next month, and he comes off a one-year deal worth $625,000 in the American League or the NHL. He is restricted, so that's an asset the Stars have to deal with, or not.

Depending on what kind of contract he'll sign, that's good veteran leadership that's always useful at the AHL level, but as far as the NHL goes- Younger prospects that are just as cheap with more upside await. They can perform at similar levels in limited roles while gaining valuable experience.

It's just a reality/cruelty of the business. Will they extend an offer to him? It's anyone's guess at this point. With 11 forwards likely already on the NHL roster next season after Cody Eakin and Antoine Roussel extensions, some extra room headed into the draft and free agency wouldn't be bad thing for a team looking to take another step in the right direction.

Here's Jeffrey's one shining moment against the Washington Capitals this year:

Vote Now: Rate Jeffrey on a scale of A to F based on his performance relative to his potential and your expectations for the season.