The Stars have found some consistency.

Share All sharing options for: Dallas Stars Finding Consistency Down The Stretch

As the season wore on issues began to get straightened out. Alex Goligoski re-emerged. Tyler Seguin cemented his place as a star in this league. And, most importantly, the team as a whole found the consistency necessary to make a legitimate playoff push. The chart below illustrates how consistent they have been of late: 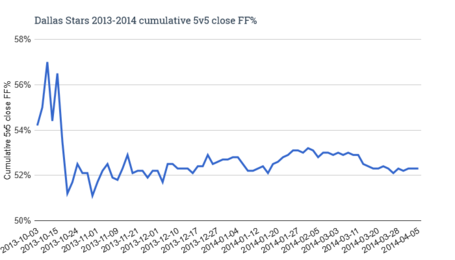 The chart shows the Stars Fenwick For percentage in close game situations over the last 20 games. At the beginning of that stretch you can see a huge spike in the Stars production,but from then on out the Stars have hit their stride as a consistently good team. The Stars have consistently been a 52-53% Fenwick team over those 17 games.

The record over those 17 games the record was only 9-8. This doesn't include yesterday's loss to the Florida Panthers.

Those are the breaks sometimes. The Stars have been doing some good things. They blew leads against the Panthers and Flames. They blew out the Capitals. They got blown out by the Jets when the Jets still had playoff hopes. The results have been mixed over that stretch, but they are getting the things done necessary to bring success forward.

For the season the Stars are at 52.3% which is good for 8th in the league. These 17 games are a microcosm of what they have become. They might miss the playoffs, but they are a very solid team on the rise. If they can continue this consistency into the playoffs (should they make it) they could cause some damage. If they can carry the success over into next season with a few additions they should be a definite playoff team in 2015.