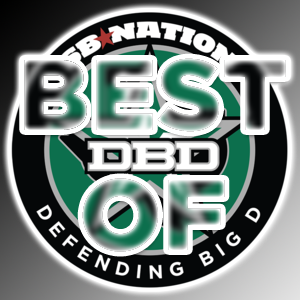 Did you ever want to commemorate something written in Defending Big D that was so amazing, or so hysterical that people frequently reference it?

Did you just join Defending Big D and feel out of the loop on the copious amount of inside jokes we have here, such as the time Brandon got stuck on an oil rig and Trevor took the Ring to Mordor?

Introducing the Inaugural "Best Of Defending Big D" submission thread, where we can commemorate the best of Defending Big D for the 2013-2014 season. Anything from the 2013 offseason to the 2014 Stanley Cup Playoffs is eligible.

Some of the categories we will determine are:

And any more categories that I missed that are worthy of consideration. There will be a Top 3 for each category, as well as one honorable mention.

I will write comments with the subject line such as "Enter your Best Comments submissions here." Only post your submissions in those subthreads so the post doesn't turn into chaos. Include the original link in your submissions.

Enter submissions for best comments, articles, derailed threads, and fanposts like this:

If you do not post the link in your submission, it will not count.

Enter best photo submissions like this (obviously, use the photo tool):

Bonus points if you can link the first time it was posted, but it's not required.

More bonus points if you submit your nominations while at work.

Submissions not posted in their respective subthreads will not be considered. Vote on submissions by recommending them.

You will have one week to submit and vote on submissions. Next Wednesday, May 7, 2014 at 3:00 PM ET, I'm closing submissions. Anything entered after 11:59 AM ET will not be considered. The winners of each category will be announced in a subsequent "Best of" thread next week.

Let's have a little fun, shall we?

What award should each winner get?