2014 NHL Playoffs: What Happened On The Nick Bonino Overtime Goal?

Several Stars employees will not be using this play for their C.V.

Share All sharing options for: 2014 NHL Playoffs: What Happened On The Nick Bonino Overtime Goal?

Mike Heika wrote a poignant article yesterday. In it he discussed the need to be both proud of how the Stars finished the season, but also recognize the "angry" element of the fan base in the wake of the significant game six collapse.

This group is a vocal minority, but they do exist. This post is dedicated to them. I consider myself almost part of their group. I think I fit more in the "mildly agitated, but still ultimately happy to just get in" crowd.

Apologies if I am speaking out of turn.

Any number of events happened in game six that are worthy of analysis. On this "Gut-Punch Tuesday" we are going to look at the Nick Bonino overtime winner. I have come to appreciate this goal after not sleeping much Sunday night into Monday morning.

The goal shows where the Stars are currently, and, more importantly, where they still need to improve. They were never going to win the Stanley Cup this season so the focus has to be to take positives out of the situation. The Stars can turn this goal into a positive by identifying areas where they can improve before the 2015 campaign.

The Curious Case of Chris Mueller

Disclaimer: I am in no way trying to dump on Mueller.

I imagine he is a wonderful person.

With that being said, why was he on the ice in overtime? I can understand some shifts later to give the top guys a rest. Does he need to be on the ice less than three minutes into the frame?

Mueller got into 5:35 of ice time. Ten percent of it was in overtime. Lindy Ruff has done a wonderful job this season, but this can't be allowed to happen. We're going to see that the goal is far from only Mueller's fault. He shouldn't be on the ice in this situation though.

When The Goal Could Have Been Prevented

You may not believe me, but this screen grab is only three seconds prior to the goal being scored. The positioning isn't perfect, but the Stars aren't in bad shape yet.

The Ducks winger is going to slide up the boards as Bonino moves slightly away from Erik Cole at just the right time to be wide open for a premium scoring chance. Mueller just got beaten by two Ducks behind the net. Both Val Nichushkin and Patrick Nemeth are in front of the net.

Jordie Benn is in no man's land. Cole has Bonino covered out front. Benn has to attack the puck carrier quickly or the situation is going to become untenable.

So when Mueller came out from behind the net after following his man, Patrick Maroon, to the front the Stars had three players essentially doing nothing productive. The red box below highlights those three about two seconds later. 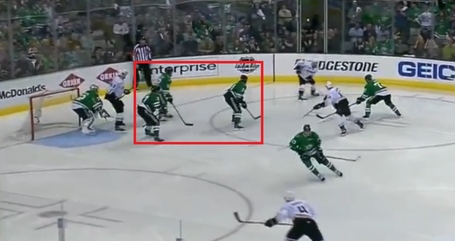 Before we move on to what Cole and Benn are doing let's look at that red box a bit closer. It reminds me of those scenes in My Cousin Vinny where Joe Pesci is trying to discredit all of the witnesses who claim they saw his cousin shoot a man at a convenience store.

One old woman has out of date glasses. One man made "magic grits" which cooked in only a few minutes instead of 15. Another man, the hick-ish one, has a bunch of dirt on his window screens which are behind some bushes which have some trees in front of them.

I feel like Lehtonen was that hick. Check out all of the obstacles to his vision from another angle. 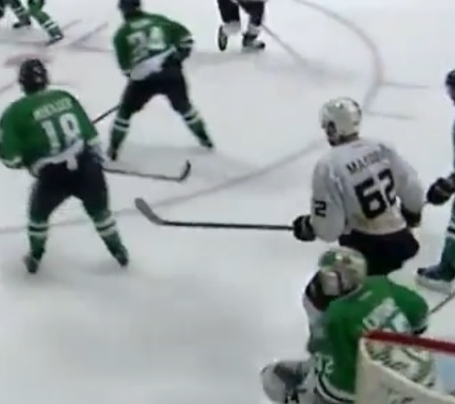 Maroon's giant hind quarters are blocking Lehtonen's peripheral vision to the right, Nemeth has to get Maroon out of the way. He can't stand there watching Maroon screen Lehtonen that effectively. Benn is also going to be at just enough of an angle to block the rest of Bonino from his vision. I am 100% confident Lehtonen had no idea Bonino was going to the slot.

Lehtonen appears to be fixated on the puck, but Mueller is standing right in front of him for no particular reason. The other half of Benn is going to be obstructing his view of the puck too because at an angle from directly behind Lehtonen Mueller and Benn will appear to be side by side. There is almost no way Lehtonen saw this puck. Or, if he did, he didn't see it for very long.

Despite all of these mistakes the Stars still could have been fine had Cole and Benn been able to navigate this two on two situation. Cole held on to Bonino in coverage for a while, but after reading that Benn wasn't going to attack the puck carrier he left to engage.

The second Cole did that Andrew Cogliano hit Bonino with the pass that led to the game winning goal. 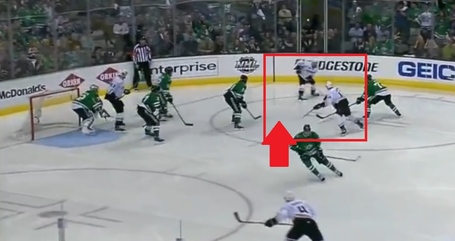 Cole engaging Cogliano while releasing Bonino to Benn who continues to stand unengaged is the catastrophic moment for the Stars. The passing lane opened up. Both players were essentially uncovered. Lehtonen couldn't see any of it. This was possibly the easiest goal the Ducks scored all year.

This is why a segment of the fan base is angry. The Stars were every bit as good as the Ducks, but shot themselves in the foot repeatedly. They gave the series and game six away from unforced errors. This play alone had at least five.

The Stars needed more from Lehtonen. They needed more from Ruff. Benn and Cole needed to communicate. Mueller, Benn, and Nemeth can't stand in front of Lehtonen screening him while marking no one. The play had so much wrong with it that it encapsulates where the Stars are fully at this moment in time.

They are young. They have question marks on the roster. They showed how good they can be. Yet, they gave this series away which sucks. We should be preparing for a game seven tonight. The fact that we aren't slightly irritates me despite my pride in what they accomplished.