2014 Stanley Cup Playoffs: Dallas Stars vs. By the Numbers, Game 4

A look at the numbers behind Dallas' series-tying effort.

Share All sharing options for: 2014 Stanley Cup Playoffs: Dallas Stars vs. By the Numbers, Game 4

Let me preface this article with a little bit of a side note.  As a wise man told me recently, the only stat that matters at the end of the night is the final score.  With that knowledge in mind, I remind (even if most of you don't need this reminder) everyone that by no means are these stats the be-all, end-all.

As we saw in game 2, sometimes a team can dominate in these statistics, and still lose where it counts: the final score.  However, this sort of information really gives us a unique insight into games that is hard to find elsewhere.  I understand that advanced stats are not everyone's cup of tea, but I do entreat everyone to pay attention to them. Even if they seem stupid, they're at the heart of most good teams' records, and they can provide a level of knowledge about the game that is very useful to possess.

(for any necessary explanation as to what the following statistics mean/why they are important, take a quick scan over this article)

As you can see, the fenwick battle in this game was pretty close for just about half the game, until Anaheim inexplicably flatlined a little after Dallas' tying goal.  During that period of no fenwick events-for for the Ducks, Dallas managed 11 fenwick events.  Heck if I can figure out what caused it, but that period of time was heavily dominated by the Stars, and ultimately, they held on to that lead in fenwick until they shelled-up after Goligoski's goal.

You all better sit down for this.  It's a doozy.

Um.  Yeah.  I, uh.... I don't even know what to say.  I know people always talk about how Getzlaf and Perry are the heart and soul of this team, and they are, but man. Be it because of the absence of Getzlaf, Selanne, and Robidas, or be it just a fluke of a game, I think this is the most lopsided scoring chance differential I've ever seen in a game.

Heck, Seguin and Benn didn't even have to knock the lights out for the scoring chances to come out this way, either.  Last post I mentioned that the Stars would be a force to reckon with if their depth got going, and holy mackerel did their depth get going, and get going good this game.

Cody Eakin especially had a fantastic game, with a 7-2 socring chance differential at even strength for Dallas when he was on the ice, and similarly, Goligoski had an amazing game on the scoring chance front, as Dallas enjoyed an eight to zero even strength scoring differential while he was on the ice.  It never sounds good to root for a player to stay injured, but, uh, if Getzlaf could take his sweet time recovering from his upper body ailment, I can think of at least twenty people who would really like it. 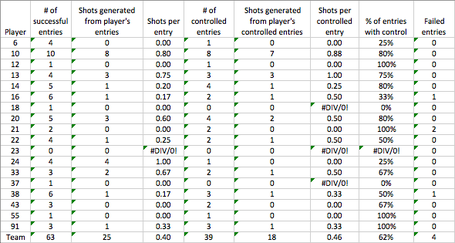 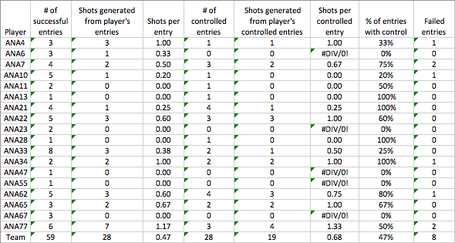 If anyone was looking to find the answer as to why Dallas severely outchanced Anaheim in this game, the answer isn't completely here, I don't think.  Yes, the Stars carried in the puck on 62% of their entries, and that certainly could've been a contributing factor (see: Cody Eakin's goal), but it's not like they shot the lights out with their entries either.  The argument of shot quality vs. quantity is a tired one that I won't delve into here, but man, is Dallas really finding a way to make a lot of their shots be of the scoring-chance variety.

On the Anaheim side of things, worth noting that both Devante Smith-Pelly and Emerson Etem had pretty good nights through the neutral zone.  They didn't match their neutral zone effort with similar scoring chance results, but if they keep performing as well as they did in this game, I wouldn't be surprised if they started putting up some points, especially in Honda Center, where Boudreau will have full reign over who they're matched up against.

So, Alex Goligoski did not have the finest game of his career.  Let's get that out of the way first.  He's had a pretty solid series with zone exits up to this point, but he did not have an easy time moving the puck out in this game, doing so only seven times on thirty four defensive zone puck touches.

Another thing that pops out in this data is how much it is going to stink if Nemeth isn't good to go Friday, that is, if Dillon isn't ready to replace him. Despite the fact that he's operating on so few games of NHL experience Patrik Nemeth's had a very good couple of games here with zone exits, having a zone exit success percentage of 70 or higher the last two games.

Aaron Rome, though I am open to surprises, cannot be expected to match that.  As we saw in game 1, Rome had a very difficult time moving the puck out of the defensive zone, and replacing Nemeth, who's been quite good at advancing the puck, with Rome, will likely only lead to bad things.  Get well soon, Patrik Nemeth.  And if not Nemeth, then even better, Brenden Dillon plz.