There will be a game six, friends.

Home ice has been defended. The Dallas Stars tied their best-of-seven series against the Anaheim Ducks Wednesday night with four unanswered goals in dramatic fashion as all the background noise and chirping faded to the background. They let their play do the talking, and will continue to do so through at least six games.

Dallas dug a 2-0 hole in the early going and the situation was bleak after 20 minutes. A different team, seemingly, came out in the second period and Jamie Benn's long-distance snipe pulled the Stars to within one just 27 seconds in the frame. Vern Fiddler would add a goal Frederik Andersen no doubt wants back from the goal line on his blocker side, and Dallas was back in business.

Cody Eakin took Dallas' first shot of the third period about seven minutes in, but it was a good one, giving the Stars a 3-0 lead to blow the roof off of the American Airlines Center, and then Vern Fiddler found Alex Goligoski cruising through the slot and he beat Andersen to extend the lead to 4-2.

The Stars have more bumps and bruises and possibly lost Patrik Nemeth, but leave for Anaheim with so much more- A tied series. A long series. One that will return to American Airlines Center Sunday, at a time to be determined. By television, is what I'm hearing.

We are a lucky bunch of people. Game three was great. Game three felt like a present after years spent waiting- A celebration of a pretty great year in the middle of a rebuild. And if that was all we got then that was going to be OK. It was.

Game four tested your meddle a little more, though, didn't it? A 2-0 hole and a pretty abysmal first period had things taking a pretty dark turn. It wasn't supposed to be like that. Ryan Getzlaf was out. It was supposed to all fall into place, right? Instead this ensued... 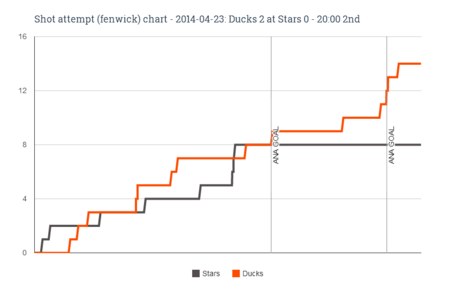 What that is is this: Two good shifts, a couple of OK shifts, and then an entire half period of nothing generated at all. Capitulation at its finest, and the Stars looked like they didn't have the stomach for that fight. Lost puck battles and turnovers were the order of the day. Or the hour.

But like a good movie things had to get pretty dark before the good guys could mount a comeback. And mount one they did.

The second period featured a lull in the middle stages but the beginning and end were fantastic possession-wise as the Stars began to wear down and frustrate them, even without Patrik Nemeth and a bigger helping of Sergei Gonchar and Kevin Connauton than what Lindy Ruff probably wants.

Nemeth is being called day-to-day and the nature of his injury is something of a mystery, but he was seen afterward in street clothes so it's nothing horrible. No boots this time. We checked.

Benn's goal was a good shot. Vernon Fiddler's was... well, it wasn't great. It was the beginning of Andersen's cracks and perhaps even a little controversy heading into Friday's game five in Anaheim. Cody Eakin beat him clean and high on the third and then Goligoski's was a tough one for anyone to stop to make it 4-0.

Boudreau was not amused, but he was reportedly pretty snappy this morning, even, so it's not been a great trip for him.

The good news for Dallas, we hope, and we've been hoping, is that Brenden Dillon might make a reappearance Friday night for game five. We'll see if he practices tomorrow ahead of the flight, but he looks on track, and that could be huge even if Nemeth weren't hurt. They would prefer not to ice Gonchar, Connauton and Aaron Rome in game five, to say the least.

For one thing, it will kill Alex Goligoski (32:48 tonight!!) and Trevor Daley (28:16). Ruff clearly trusts these guys and not much else. Without Dillon it's unclear how long they'll last under these conditions. Goligoski was named the game's first star and it was well-earned.

Ryan Garbutt appeared to suffer some kind of malady in the third period and had some difficulty getting back to the bench, but was well enough to return and earn a high-sticking penalty, so we'll hold our breath on his status after his body as a night of sleep and some time to think about it.

Dallas kept it pretty clean, as we knew they must do. Two penalties in the substantive part of the game- One a rookie mistake by Val Nichushkin, who had a bit of an off-night. The Garbutt penalty was late enough that it was not a huge factor.

Frustration continued for Anaheim as Corey Perry took a boarding minor late in the third and then a fighting major after a twirl with Antoine Roussel. He was on the ice for the Benn goal and the Goilgoski goal, taking a -1 rating in the loss with just three shots on goal.

Dallas' #10, on the other hand, had one of his better outings as a Star. Two assists, +2 rating, and four shot attempts accompanied an impressive eye-ball test on Shawn Horcoff tonight, who was moving his feet and aiming to stir the drink in all three areas of the rink.

So we have a series. The Texas Stars won their opener tonight as well, taking it 3-2 in overtime thanks to Mike Hedden. It's nice to have both of these franchises in the mix at the same time, for the first time.

Get your tickets for Sunday. You don't want to miss this atmosphere.