A statistical look at the Stars' first victory of the postseason.

Before we dive into the stats, I just want to give a little context, so as to clear up the picture they will show us. As much as us stat-heads rant and rave about the importance of Corsi and Fenwick (they are both very important), on a game to game basis, the most important stat is scoring chances. More often than not, the team with more scoring chances is going to win the game, so even if a team gets out Corsi'd, if they're generating a bunch of scoring chances, the night ultimately has to be viewed as a win, because the team is getting it done in the most important way. Keep that idea in mind when perusing the stats below. 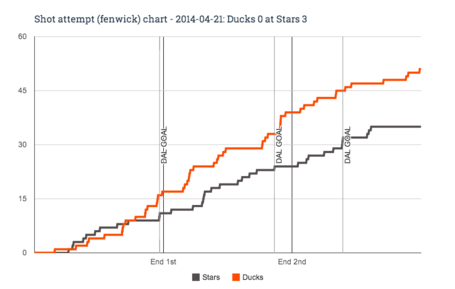 So yeah, by the Fenwick chart, this game doesn't look too great, and realistically, Dallas should hope to out-Fenwick Anaheim in future games, but given that the Stars held a lead for most of the game, I'll give them some leeway, and attribute some of it to just going into a bit of a defensive shell.

Sooooo yeah, what I said about a team generating a lot of scoring chances technically being the better team... uhm... Dallas tho. Sure, overall chances being 15-11 doesn't make things seem too great for the Stars, but outchancing Anaheim thirteen to six at evens is absolutely phenomenal. Mind you, some of that is helped out by the segment of three scoring chances in three seconds before the Garbutt goal, but still, hard to say that a scoring chance differential like that isn't something to be proud of. Did some of the lower line guys have their best games of the season? No, not at all, (can someone remind me why Mueller is in over Cole?) but when your top line is outchancing the opposition 8-3 when they're on the ice, your bottom lines don't need to be having good games. If the lower lines can get going, and Seguin and Benn continue on their upward trajectory, in terms of scoring chance production (doubtful, but you never know), then this team will be just about unstoppable for Anaheim, especially if Perry and Getzlaf don't get their stuff together. 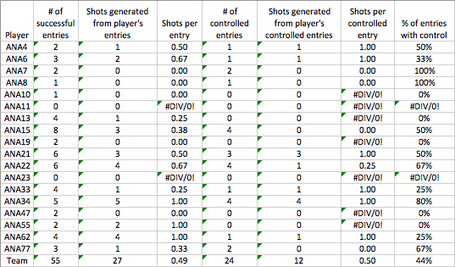 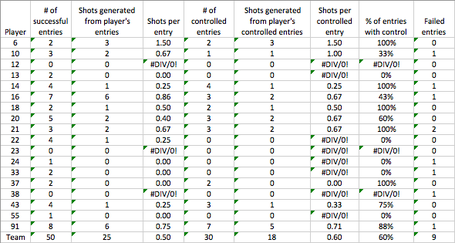 Not much to say on the entries front, aside from the fact that Dallas managing a 60% carry-in rate is very good (any number above 50% is generally pretty good), and #Seguinbest. Just like last game, that top line didn't necessarily generate much offense off of all three members' zone entries, but one player just had some magic entries touch, that player being Seguin tonight, much like Benn last game.

Beyond that, it's worth noting that the Goligoski-Daley pairing had about as disparate a night with exit success as possible. Goligoski advanced the puck on his non-in zone pass touches at a 63.2% rate, which is pretty darn good (bettered only by Patrik Nemeth, who had his first successful zone exits game of the series tonight, in that category), whereas Daley only had a 21.4% success rate when trying to advance the puck. That simply isn't good enough from one of your top two D-men, as generating only 3 successful exits on 23 defensive zone puck touches will get you no where good. Hopefully Daley will rebound from this game in that category, but if not, at least he's got Goligoski to carry the load for him.