We take a statistical look at every reason why the Ducks were lucky to escape with a win last night.

Firstly, let me say something.  As a Sharks fan (my favorite teams go 1) Sharks 2) Stars 3) Blue Jackets), last night's game seemed all too familiar.  The reason that is, is because Anaheim's regular season contained many games much like last night's.  They would either play even with their opposition, or get outplayed by them, more often than not, but would escape games with wins due to some pretty hefty goaltending and shooting percentage luck.

A way to quantify "luck," to some extent, is the stat called "PDO."  PDO is a pretty simple stat, but can tell you a lot about how sustainable a team's record over any given period of time is.  PDO=save percentage%+shooting percentage%.  In general, we expect PDO numbers to hover around 100, with really good teams maybe making a consistent habit of being above that mark.  With that knowledge, we can look at a team's record over a certain stretch of games, say, a four game losing streak, and see that that team's PDO dropped as far down as 95.9 (that's Florida Panthers-level bad), before an inevitable rebound and a continuation of the team's ability to actually win any games.

But, "what does all this highly educating and entertaining information have to with last night's game?" you ask (thanks for the compliments, by the way).  Well, if one goes to any site that tracks PDO, and takes a look at Anaheim's PDO number, we see them leading the league by quite a bit, with a bloated 103.4.  That's so lucky, even people walking around with rabbit foot necklaces, and clothes made out of four leaf clovers balk at it.  Combine that large number with the fact that Anaheim barely controlled over 50% of the shot attempts in their games, and we know that Anaheim largely found their way to a divisional title, and first seed in the Western Conference through winning a bunch of games, not through being a very good team, but by having some very very helpful luck, just like last night.

(for any explanation as to what any of the following stats are/why they are important, take a quick scan over this post) 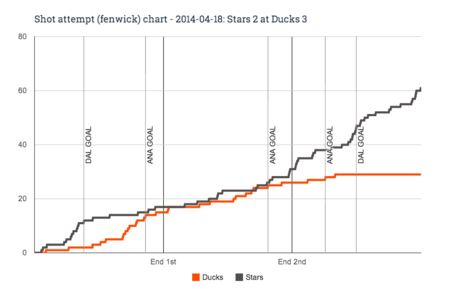 After game 1, I wrote a bit about how we should have seen the Stars take it to the Ducks after Anaheim opened up a multiple goal lead, how teams tend to go into a defensive shell once they've gotten a lead.  This game perfectly exemplifies that.  While the Stars were generally leading the shot attempts battle in this game (unfortunately letting a big lead in that department crumble away after their first goal) for the first 40 minutes, they really started taking it to the Ducks after Anaheim scored it's third goal.  From that moment on, Anaheim had one shot attempt.  No, that isn't a really weird typo, and yes, you did read that correctly.  In 14 minutes and 51 seconds of game time following Cogliano's short handed goal, Anaheim had one single shot attempt.  They went into as defensive a shell as I've ever seen, being out-Fenwick'd by Dallas by what looks to be around a 23-1 margin.  Yes, Dallas did score a goal over that span, but the Ducks might want to count themselves lucky that they didn't give up more during that period of time.

First off, I'll echo what John Lile detailed in a post earlier this morning.  While all of Anaheim's goals were scoring chances (in fact, every goal scored last night was off of a scoring chance) last night, two of them were relatively borderline.  Both Getzlaf and Perry scored on shots that were just on the edge of what we consider to be the "scoring area" (the area within the black lines in that picture), and that obviously isn't a trend we want to see continue.  Not to pile on Lehtonen, but let's just hope that the crowd at AAC will be given more reasons to chant "KA-RI" over the next couple of games rather than reasons to boo at the top of their lungs following an Anaheim goal.

Last article, among many other things, I pointed out two big things:

1) How awesome the Beauchemin-Lindholm pairing was,

Well, both those things changed in the game last night.  Despite the fact that the Beauch-Lindholm pairing mostly faced non-first line opposition (most often facing off against Val, Eakin, Cole, Sceviour, Horcoff, and Garbutt), Anaheim was outchanced at even strength 3-5 when Beauch was on the ice, and 2-5 when Lindholm was on the ice.  That's obviously something that's very good news for Stars fans, but Ducks fans really should be hoping for better performances by that pairing, especially when they're not facing Dallas' top players.

Speaking of defensive pairings that aren't doing well, I don't know what exactly it is that Bruce Boudreau sees in the Fowler-Lovejoy pairing that makes him think they're the ideal pair to match up against Benn-Seguin-warm body, but it hasn't worked for him so far.  In game 1, it wasn't too bad, with the Fowler-Lovejoy pairing getting outchanced 0-2 at even strength, but in game 2, they were outchanced 1-4, something you definitely don't want to see from your "shutdown pairing."  Of course, on the flip side of that pair's performance is the fact that Benn and Seguin had exactly the type of game I was hoping from them.  After last game, I lamented the fact that Benn and Seguin only produced two scoring chances at even strength.  After this game, I have zero complaints.  While being matched up against two of the better forwards in the league in Perry and Getzlaf, Benn and Seguin were on the ice for a 5-1 scoring chance differential at even strength (Chiasson doing them one better, with a 5-0 scoring chance split at evens), also chipping in a 4-0 differential on the power play.  Sure, they didn't put up the point numbers that they did in game 1, but if they keep playing like they did last night, the points will come. 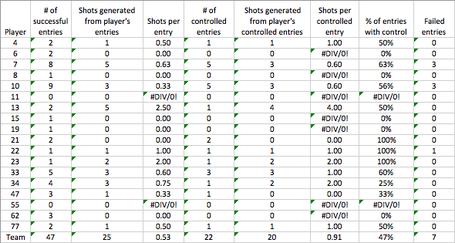 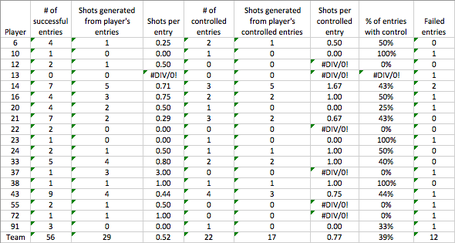 If there's one negative that I can point out from the above data, it's that Anaheim got waaaaaay too many shot attempt off carry-ins last night.  Yes, we do expect teams to generate more shot attempts off of carry-ins than we do with dump-ins, but averaging almost one whole shot attempt per carry-in is pretty big.  I can't say I have any suggestions as to how to fix it (it's somewhat hard to make a lot of non-statistical observations of a game when you're constantly tracking things), but hey, that's what Lindy's for, right?

On the positive end of things, though, Dallas out entry'd the Ducks, which is always good, and Val had yet another excellent night on entries.  Maybe some of you out there have become acclimated to it after watching him all season, but he has yet to cease to put me in disbelief every time I watch him play, with full knowledge that he's just a teenager.

And although their line didn't generate much off of Seguin or Chiasson's zone entries, Benn's line generated a lot of offense off of his entries.  As I said before, averaging a little less than one shot attempt per carry-in is pretty great.  Averaging 1.67 is fantastic.  It's a small sample size, and by no means do I expect it to continue, but again, a heckuva performance by that line last night.

Lastly, Goligoski had about as successful a night on entries as you're ever going to see from a defenseman, carrying the puck in 2 out of 5 times, and the team generating some pretty good shot attempt numbers off of them.

For all the criticism he gets for his work in the defensive zone (for example, not doing well against top opposition *coughcough*), Fowler was easily the Ducks best defenseman at advancing the puck out of their zone.  That's due to a combination of a couple major factors.  Firstly, his very smooth skating, allowing him to simply skate the puck out of the zone rather than having to worry about passing it out.  Secondly, the rest of Anaheim's defensemen simply did not have good zone exit games.  Bryan Allen's performance was pretty standard for a player like him (see Murray, Douglass; Fraser, Mark; Harrison, Jay; Stuart, Brad; etc.), but when five of your defensemen combine to advance the puck out of the defensive zone, on average, on one out of three of their non-in zone pass defensive zone puck touches (a 33.68% exit success percentage for Lovejoy, Robidas, Beauchemin, Lindholm and Allen), you're not going to do very well in a game.

On the other hand, Dallas' defensemen were generally very good at advancing the puck out of the zone on their non-in zone pass puck touches (a 71.4% average exit success rate for Dallas' six D-men), in fact, every defensemen not named Patrik Nemeth saw an improvement in their exit success percentage from game 1 to game 2, highlighted by Jordie Benn's improvement from 44.4% to 77.8%, and Goligoski's from 60.0% to a fantastic 88.9%.

This sort of analysis also gives us a pretty good insight as to why it is that defensemen like Kevin Connauton tend to be more successful than those like Aaron Rome.  For all of Rome's supposedly-important grit, and for all of Connauton's flaws in the defensive zone (see Getzlaf's goal last night), defensemen like Connauton are simply in a completely different league than those like Rome when it comes to advancing the puck out of the defensive zone.  With Aaron Rome in game 1, we saw a 25.0% exit success rate, whereas Kevin Connauton last night had a 83.3% exit success rate.  There aren't many great lineup choices that Lindy Ruff can have full control over right now with Brenden Dillon out, but keeping Connauton in the lineup over Rome is one that is both easy, and very beneficial to make.