The Stars 6'4 netminder made himself pretty small last night.

The Stars did not lose game two because of Kari Lehtonen. They could have won that game with the performance Kari gave them, but it wasn't good enough to increase the probabilities in the Stars favor.

The problem is that the Stars do expect more from Lehtonen. He was average at best in a game the Stars needed to win to gain a split on the road. The three goals were far from his fault alone, and we will touch on that some. But, the focus here is the performance of Lehtonen through the three goals he allowed in the Stars 3-2 loss.

The Stars had a one nil lead. Erik Cole was trying to play the puck along the boards yet it was bouncing all over the place. In retrospect he should have simply chipped the puck out to regroup. It was a poor sequence for a veteran player. However, the chance generated by Getzlaf is far from impressive. It resulted in this shot attempt: 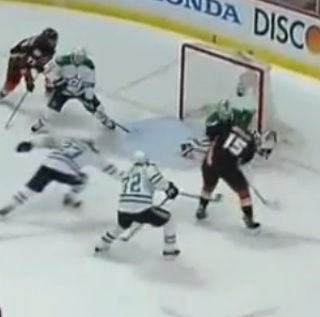 See all that space above Lehtonen? So did Getzlaf. Lehtonen has his glove below his pads, his back is real low, and his shoulders are dropped. The second leading scorer in the NHL is two feet away from the net and has, I would guess, 60% of the net available for the first Ducks goal.

Is it difficult to elevate in tight? Absolutely. Getzlaf isn't that tight though. And, did I mention he's the second leading scorer in the NHL? You kind of expect him to bury higher degree of difficulty shots. This shot wasn't one of those though. The turnover was bad, but Lehtonen made himself so small that this was a chip shot for a player of Getzlaf's caliber.

Corey Perry finally scored another playoff goal. He did it through brute force. There was nothing pretty about this goal. This is the goal that came after the Tyler Seguin cross ice pass to Jamie Benn at his own blueline. It may have been ill-advised, but those are two superstar players and Benn was pretty wide open. It was just a poor pass.

Like the Cole goal the circumstances were less than ideal, but the resulting shot was very stoppable. Several aspects of this goal make it frustrating. 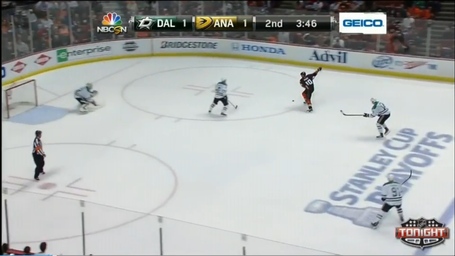 First and foremost is the fact that it is barely a scoring chance. The chance is on the edge of the boundary of the scoring chance area:

Secondly the shot was completely unscreened. Perry was the only Duck in the zone. Trevor Daley even visibly moves out of the way to let Lehtonen see the shot in the video of the goal. The Getzlaf goal is understandable given where Getzlaf was. This goal isn't defensible though. Lehtonen has to make this save.

One out of ten shots from this area is going in, but not generally when they are completely unscreened with the goalie having ample time to prepare.

The Cogliano goal came shorthanded after the apparent slash by Cogliano on Sergei Gonchar. No NHL Gamecenter Live archive of the game exists currently so all we have are highlights. Based entirely on the video available via NHL.com I am not convinced Gonchar was actually slashed.

Unfortunately the highlight of the goal starts with Cogliano's stick parallel to Gonchar. The slash happened at that point if it happened. The point where I thought it happened in live speed is when Gonchar threw his hands to the sky, but as you can see Cogliano swings around AFTER Gonchar throws his hands up.

Whether it did or didn't happen is ultimately irrelevant though because in hockey you can't stop playing until you hear a whistle. The Stars did. They had five guys plus Lehtonen in their own end against two Ducks. Inexplicably they lost one of the Ducks.

You can see the problem. Every player on the ice who needs to be watching Cogliano is watching the puck. Val Nichushkin, Trevor Daley, and Lehtonen have virtually no idea Cogliano is there mere seconds before he scores. This is not the powerplay scheme the Stars drew up. A defensive lapse such as this is going to turn into a goal often if that pass gets through. Given how wide open that passing lane is it was almost a certainty. 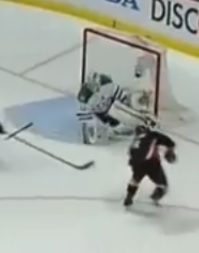 Once again there were several things Lehtonen couldn't control, but it's amazing to me how similar this shot is to the one taken by Getzlaf. Sure, Cogliano isn't Getzlaf, He does however have almost the exact same career shooting percentage. If you let him get in that close with that much space and, on top of everything else, give him that much open net at which to shoot he is going to score.

This isn't all doom and gloom. The Stars played well enough to win a game in Anaheim. They didn't. The world won't stop. This series is far from over. They have proven repeatedly that they are a high enough quality team to knock the Ducks off. If they clean up the turnovers they can take care of the Ducks with the goaltending they have gotten from Lehtonen.

But, life would be a lot easier for the Stars if they could get the well above average Lehtonen to show up for game three.