A look at game 1 between the Ducks and Stars, with an analytical twist.

Hello all.  Just a quick intro, my name's Jake, and I will be writing Shutdown Line-esque By the Numbers posts here after each game of the playoffs this year, so let's hope I'm writing at least another

16 articles here before the playoffs are over, yeah?

In these articles, I'll be giving you guys a look at the Fenwick chart for each game (courtesy of Extra Skater), scoring chance data, zone entry data, and zone exit data for each team, and a little blurb on the data altogether.  So, with all that having been said, here we go. 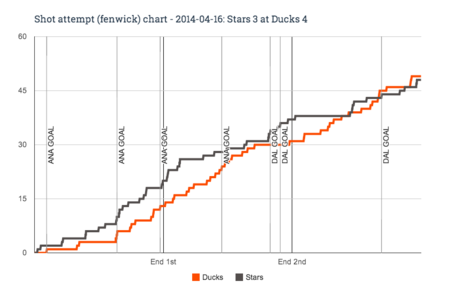 For anyone unfamiliar with Fenwick, the basic idea is that in general, teams with higher Fenwick%s tend to win more games. Therefore, when looking at a graph like this, you want the line representing your teams’ Fenwick (shots on goal and missed shots) to be above the other teams. For the most part, that was the case in this game, however, one odd sorta’ thing does show up here. Generally, teams who trail on the scoreboard tend to outshoot their opponents, with this "effect" increasing as the score differential increases (this is often the true cause behind a team "showing heart" during a third period in which they are trailing by multiple goals, and largely outshooting their opponents. It’s more often than not just the fact that the other team is going into a defensive shell, not that the trailing team’s hearts suddenly grew three sizes during intermission.). However, we don’t see that "score effect" present in this graph.Dallas was trailing by one goal or more for just about the entirety of this game, yet they only really had one period of time where they greatly out-Fenwicked Anaheim; a period of time that lasted only a few minutes. It’s all well and good that the good guys came back to get the score within one, but they really should have been generating a lot more offense than they did during this game.

Below is the raw description of each scoring chance that occurred last night.  In the chart you will find which team's tape the chance came off of, the time of the chance, who had the chance, as well as the last person to touch the puck before the chance was had.  You'll also find who was on the ice for both teams when each chance occurred, and what game state the chance occurred in.

First thing that comes to mind when seeing this data is, holy wow, that Beauchemin-Lindholm pairing.  Outchancing your opposition by 5 scoring chances is huge, especially when you're only giving up 2 or 3 scoring chances against while playing around 15 minutes of even strength hockey.

Beyond that though, this data really just shows that, for all the talk of how this series is going to be a clash between two dynamic duos (Perry-Getzlaf, Denn-Seguin), it was Anaheim's that really showed up to play tonight.  In a season headlined by Jamie Benn and Tyler Seguin having career years, they need to be taking that A-game into this playoff series if they want to move any further towards the Stanley Cup.  I'm willing to accept that it's just one game, and maybe it was just a fluke of a game, but no matter what, Benn and Seguin gotta bring some more offense to Friday night's game.

Just another quick explanation: zone entries are obviously supes important to any team wanting to generate offense.  As Eric T. over at Broad Street Hockey has shown, team's that carry the puck into the offensive end of the ice, rather than dumping it in, tend to generate more offense off of those entries than if they had dumped the puck in.  So, when looking at the chart below, keep two things in mind: 1. the more carry-ins, the better.  2. Shots/entry is really what we care about on a game to game basis.  This will show us not only who was generating lotsa' entries, but who was actually turning these entries into solid offensive pressure. 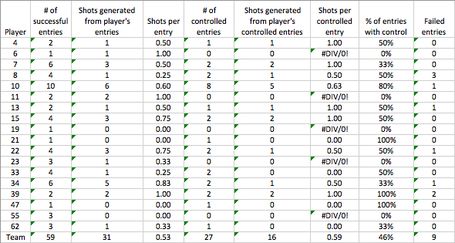 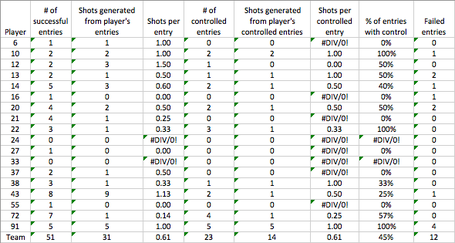 -Just in case it needed to be said: Corey Perry, no matter how much of a little rat he is, is very good at hockey.

-Although the Stars didn't generate as many entries as the Ducks, they did generate more offense off of their entries than the Ducks did with theirs, so I guess that's some sort of positive.

-Another positive is Nichushkin.  Anyone who's watched him this season already knows, but this kid is really fantastic.  Sure, he didn't carry the puck into the zone a ton, but generating over one shot attempt per uncontrolled entry is fantastic, and really should warrant him more playing time, despite Sceviour's 2 point game tonight.

Similar to zone entries, except, regarding defense, zone exits, and how successful a team is at them, tends to have a large impact on their defensive game.  Effective zone exits are one of the (many) things that separate guys like Duncan Keith and Douglass Murray.  Whereas the Murrays of the NHL might be stuck in their own end for minutes at a time because they can't successfully facilitate a breakout, the Keiths of the NHL will often be able to spend more time where they want to be--in the offensive zone--because they can efficiently and effectively break the puck out of the zone, and get the puck on the right half of the ice.

First thing that you'll likely notice when looking at the above data is something along the lines off "whow, Dallas touched the puck a lot more times than Anaheim." Normally, touching the puck a lot, one would think, would mean that that team was possessing the puck a lot, and doing really well in that game. In this context however, touching the puck as much as Dallas did is certainly not a good thing. It means their breakouts were getting thoroughly stifled by Anaheim's forecheck, causing them to have to waste precious time doing repetitive D-to-D passes or reverse passes to try and relieve pressure. This inability to start a clean breakout can also be seen in the turnover numbers for each club, with each Star having at least one turnover, while Anaheim had far less.

So, what do all these numbers tell us? Well, that the Stars simply didn't play as well as they should have tonight. The score says they weren't the better team tonight, and it's right. Anaheim's big guns and depth players outchanced their counterparts on Dallas' roster, and they were able to gain the offensive blue line more frequently than Dallas, mostly caused by Dallas' inability to consistently generate clean break outs.

What needs to be changed before next game? As stupid as it sounds to say, because Hockey Gods know the coaching staff has been obsessively studying every facet of Anaheim's game for the last week, but they really do need to find some new way to break down Anaheim's offensive zone forecheck. If the Stars want to get back into this still-young series, they're going to need to be able to get out of the D-zone a lot cleaner than they did tonight.

Other than that, Seguin and Benn need better games next time, and jeez, can Brenden Dillon just come back already?