*This does not include game 82 for either the Stars or Ducks.

The number one seeded Anaheim Ducks will take on your number eight seeded Dallas Stars in the first round of the playoffs. Top seeds are generally expected to dismantle lowly eight seeds. That may happen, but I wouldn't bet on it. The Stars and Ducks aren't nearly the mismatch the standings would suggest. One could make a decent case that the Stars should be favored in this series.

Sit back. Strap in. This might take a while. This information is coming from numerous locations including, but not limited to, Extraskater.com, behindthenet.ca, NHL.com. and God only knows where else.

Welcome back to the Stanley Cup Playoffs. It's time to get your head right for the first round which starts Wednesday at 9 p.m. central time.

Let's jump right in by checking out how the two teams have been playing heading into the playoffs.

The Ducks are 7-2-1 in their last ten games. The Stars are 6-4 over the same stretch, but the records don't tell the full story. 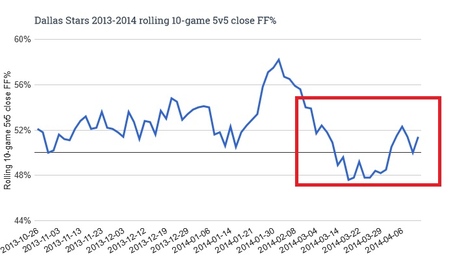 You can see that the Stars struggled a bit near the end, but started to pull out of it over the last three to four games. It's worth mentioning that the last game on the chart was the Blues game where half of their roster was unavailable. The chart is fairly consistent though, especially when compared to the Ducks. 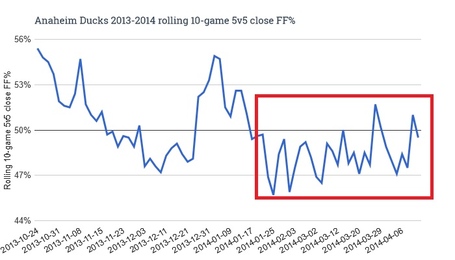 The Ducks' entire graph fluctuates wildly. The last seven in particular are a roller coaster of mediocrity. For the most part they have stayed under the 50% mark.

For the season the Ducks are a 50.1% Fenwick team which was good for 16th in the league. Sitting pretty at 9th in the league were the Stars at 52.2%. Unquestionably, the Stars are the team showing the characteristics of being the superior team.

Over the past couple of weeks both clubs have been aided a bit by luck though. 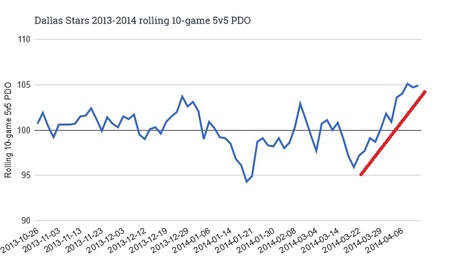 Down the stretch the Stars had some luck aided wins. Over the last ten games the Stars PDO hovered around 105 which, over the course of a full season, would have led the entire league. Outside of that stretch though the Stars were more or less right around 100. But, oh the Ducks! 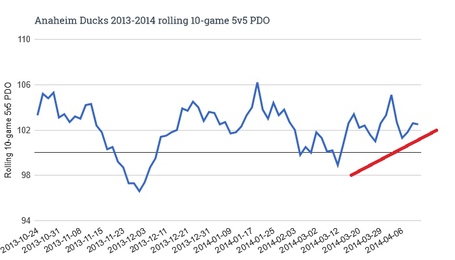 Throughout the entire chart the Ducks are well above 100 including an upward trend over the last several games. Anaheim has been aided by a decent amount of luck, and quite a bit more than the Stars. For the full season the Stars finished with a 99.9 PDO and stood 16th in the league. The definition of middle of the pack.

The Ducks, though, led the league in luck. The full season PDO for the Ducks ended up at a remarkably fortuitous 103.6. This series is going to be tough, but the Ducks are not a team the Stars should be afraid to play.

What can we expect to see from these two? The Player Usage Charts will help shed some light on that. For both teams they paint a picture of two teams run relatively similarly with differing results. 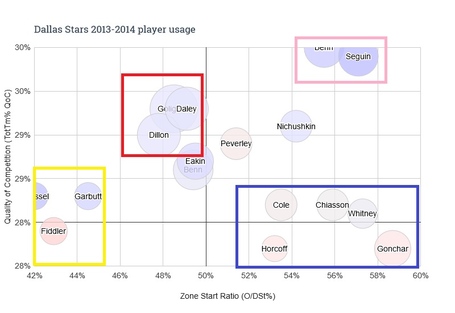 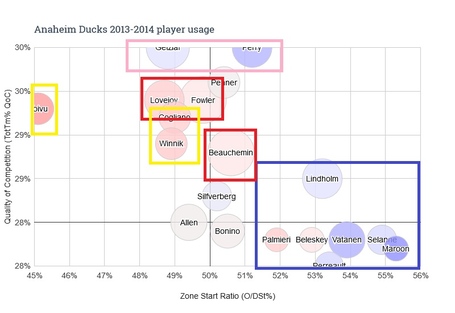 Both the Ducks and Stars rely heavily upon two key players highlighted by the box with the pink outline. The four players in question should see quite a bit of each other. Tyler Seguin and Jamie Benn for the Stars carry the load. For the Ducks? Corey Perry and Ryan Getzlaf.

The red boxes show the defensemen each side relies upon. For the Ducks that consists of Ben Lovejoy, Cam Fowler, and Francois Beauchemin. For the Stars the group is Alex Goligoski, Trevor Daley, and Brenden Dillon.

The players in the yellow boxes are the ones trusted with ice time closest to their own net. Vernon Fiddler, Antoine Roussel, and Ryan Garbutt take the privilege for the good guys. Saku Koivu, Andrew Cogliano, and Daniel Winnik on the other side.

The blue boxes? Those indicate the players the teams don't rely much upon at even strength. They could have a big impact on the series, but if so it will likely be in sheltered roles at even strength.

To gain entrance into the pink squares you must be in the top ten in the NHL in points. Seguin (4th), Benn (9th), Perry (5th), and Getzlaf (2nd) sit alone on that throne. Their coaches use them in very similar roles. Both duos are generally matched head to head against the top line of the opponent. Lindy Ruff tends to get his duo into the offensive zone more often, but these four players can expect to see quite a bit of each other.

These are the key guys to look to for difference makers in this series. On some level they should cancel each other out. All four should be producing at similar levels. If either group falters that team is likely doomed.

Six defensemen have carried most of the load for the two teams this year. The Stars trio has performed at a much higher level than the Ducks trio. Goligoski and Daley have settled in as the top pair in Dallas. They have both had significant rebounds under Ruff. They should see a decent amount of Perry and Getzlaf.

Daley in particular is going to need to be careful when dealing with Perry. Daley has taken 16 more penalties than he has drawn. Perry has drawn 14 more than he has taken. Playoff match ups often come down to special teams play, The Ducks special teams are nothing special, but there is no need for the Stars to consistently load the gun either.

The Ducks have some concerns with their red group also. The pairing of Fowler and Lovejoy routinely see the tough minutes for Bruce Boudreau, and they're okay at it but nothing special. Seven even strength minutes per night of Benn and Seguin with a healthy dosage of Valeri Nichushkin is going to cause these two problems. Both players are in the red in possession, and there is little reason to expect that trend to change in the series.

The yellow squares are our friends who see extensive time in their own end. The Stars trio of Roussel, Fiddler, and Garbutt has a more defined role than the identified Ducks trio, but Saku Koivu in particular does take a good amount of time in his own end.

The key for the Stars trio is their speed and ability to get up the ice to take the heat away from their own end. Ralph Strangis has taken to calling Roussel and Garbutt the pitbulls. It fits. These two units will rarely be on the ice together. They will mostly be facing the blue squares of the other team.

The guys with the least responsibilities are going to have some room to shine at times. Two to keep an eye on are Erik Cole and Nick Bonino. Between the two of them they have 37 goals. In light minutes they have produced the critical secondary scoring that ends up deciding these series. Neither guy is going to have a target on his back, but could ultimately end up making the difference in the series.

Three other blue squares to watch are Alex Chiasson, Kyle Palmieri, and Patrick Maroon. Chiasson in particular could be a large playoff weapon due to his size in front. The team with the better special teams is going to have a big advantage in this series. Chiasson's ability to disrupt in front will be key for the Stars power play.

There are several players who don't fit entirely in any of the above categories worth mentioning briefly.

Nichushkin had a very solid rookie season which looked like it would be special at times. He makes everyone around him better, and should start out with the Benn and Seguin duo. Nichushkin is a bull with the puck. If he is coming down the wing against Cam Fowler who is going to win that battle?

When he wins that battle, who is left over covering Seguin and Benn?

He has the ability to put the Stars over the top, but it might not be his time just yet. At the very least he creates severe match up problems for Anaheim.

Stars fans have pined for Sceviour on and off for most of the season. When they have gotten him he has done nothing but produce. In 26 games Sceviour scored 8 goals while displaying very good offensive instincts. The Ducks aren't going to be focusing on Sceviour, but like Cole he should be a key down the lineup.

Acquired for pennies from the Washington Capitals in the offseason, Perrault has been productive in the bottom six for for the Ducks. Like a lot of the Ducks Perrault is fast. His speed is matched by the Stars depth, but it only takes one mistake for speed like Perrault's to shine through for a scoring chance.

Kari Lehtonen is Kari Lehtonen. We know he should be a steady influence for the Stars. The question is what are the Ducks going to do?

Jonas Hiller has been awful. Frederik Anderson has a .923 save percentage in 20 games, but he has been dealing with an upper body injury. Rookie John Gibson has been up lately, and he has apparently looked good since his recall. But they aren't going to trust a rookie with three NHL games, right?

At this point it is anyone's guess who will start in net for the Ducks. That's a pretty sizable red flag for a team with Stanley Cup aspirations. It doesn't kill a team's chances, but a contender would ideally have goaltending more squared away than this.

Neither club is particularly great on special teams. The Stars and Ducks come into the series at about 16% on the power play. One percentage point separates the two on the penalty kill also. The team that is able to turn these units into a strength is going to have a big advantage over the other in this series.

One of the strengths of this Stars team has been their dedication to not taking a bunch of unnecessary penalties. Against a lot of teams the Stars would have a large advantage, but not the Ducks. The Ducks took 306 minor penalties. The Stars took 307. Neither team likes to put the other on the man advantage, and there is no reason to expect either team to change now.

Both teams are fast. The Stars have a steadier goaltending situation. The Stars are a better team at even strength. The special teams are a push. Neither team really takes penalties. Both teams have similar top end talent, but the Stars have more guys you could see rising up to make an impact.

The Stars will take the series in six. They're the 8th seed, but they're the equal of this number one seed. Let's get to Wednesday. My body is ready. Is yours? This has been a long time coming and I can't wait.