Dallas Stars to Face Either Colorado Avalanche or Anaheim Ducks

Who would you rather face, you happy Stars fans?

Share All sharing options for: Dallas Stars to Face Either Colorado Avalanche or Anaheim Ducks

The Dallas Stars have punched their ticket to the dance, as the saying goes. The next step, after a perfunctory outing with the Phoenix Coyotes tomorrow, would be to acquire an opponent.

The league's new playoff format takes a little getting used to and it's hard to sort it all out. The first thing we know for sure is that it will not be the St. Louis Blues. Dallas, as the second wild card seed, must face the top-seeded divisional winner, which, thanks to the events of last night, will be the Anaheim Ducks or the Colorado Avalanche.

As it stands now: 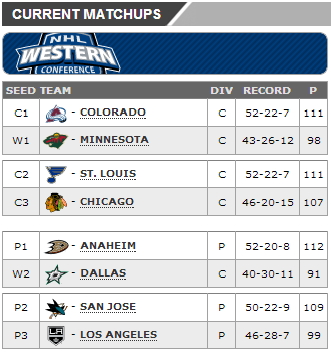 The Anaheim Ducks sure look like the more likely opponent at this moment. They have two games remaining and can clinch the top seed, thanks to the ROW tie-breaker, with only a single point more earned.

They play the Kings tonight, and then the Avalanche tomorrow. Should they fail to secure a point this evening that game Sunday will be for top billing.

Curiously the Ducks, were they inclined, could pick their poison in the first round- The Minnesota Wild or the Stars. But they'll also want home ice throughout if they have their eye on the cup, so finishing above the Avalanche and even an outside chance at catching the Bruins 115 points should provide motivation enough.

If it's Anaheim, the Stars enter the Pacific Division's bracket, and their path would be Ducks, then the winner of San Jose and Los Angeles. Were they to somehow make it that far, they would then curiously be the Pacific Division playoff champions, so to speak, and would progress to face what one can only assume would be Chicago or Colorado from the Central.

That's just for informational purposes, mind you. For now we'll be glad to know four playoff games are coming our way. After all these years it's seems an embarrassment of riches.

If it's the Ducks it sounds like it will start Wednesday night, and that the Stars would travel there directly from Phoenix to get that time change squared away and everyone rested. If it's the Avalanche it sounds more like Thursday, with the Stars coming back in between. Anything is possible, however.

Will it be the Ducks, or do you see things falling right for the Colorado Avalanche?

Lindy Ruff was asked who he'd rather face last night and called it, amusingly, to the gentleman's face, a stupid question. For we, the fans, however, it is exactly the question as we wait.