Misters Goldsworthy, Broten and Masterton get a victory green update.

The American Airlines Center was already festooned with additional technology and infrastructure Thursday night when the Canucks were in town, no doubt supporting the elaborate ceremony tonight. Some of the redecorating being done is permanent, as the organization made known during Saturday's morning skate.

The Stars tweeted a sneak peek of what Mike Modano's banner will probably look like with the revealing of the elimination of the old combined banner for North Stars Masterton, Goldsworthy and Neal Broten.

Those replace this, in case you're unfamiliar: 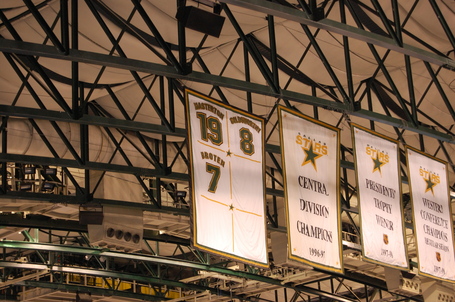 The new banners have the North Stars logo on them, though all are done in Victory Green. One can only assume that Modano's will also be in victory green, and will feature the Dallas Stars logo newly replaced, but we'll have to wait until tonight to see.

That's a pretty great way to honor the different looks the franchise has had through the years, while applying a really classic and clean look- Just like they wanted to do with the new jerseys. Something that could have been around for a long time that will still look great 50 years from now, was Gaglardi's vision. I'd say it's been extended to these banners as well.