This puppy is pretty cool, and would look great our your coffee table. Or the back of your john.

Saturday the Dallas Stars will retire #9 to its rightful place in the rafters high above American Airlines Center ice. And there's a pretty sweet book out chronicling all things Modano that fans are going to want to get their hands on, if you haven't already.

"Oh, it's great. Heika did a good job," Modano told me earlier this week.."[Joe] Calvillo did such a good job getting the pictures together. It's a cool story from start to finish, I guess, of how I got started in hockey, made some decisions in high school to move to Canada, my years in Minnesota, obviously the move here, some of the Olympic experiences I went through, finally some of the wedding and my life with Allison, and then the future."

That would be Stars PR man Joe Calvillo, and all involved did a beautiful job creating a great coffee-table style collectible for this occasion.

Mike Heika gets, deservedly so, much of the credit, but Modano said the inception of the project lay in his peers that have had their numbers retired before him.

"I think it was Brad Alberts [Executive Vice President] and Jimmy Lites," Modano credited for the idea, "and we were thinking and trying to put together some sort of a collage of my life and this and that and they had gotten wind that Yzerman and Messier did some sort of thing like that- Sort of a picture telling book."

The book is picture intensive with narration accompanying, along with letters from former teammates and executives (Lehtinen, Gainey, Gaglardi, etc...) as tributes to Mike.

"We looked at the one Yzerman did," Modano said of how this one was patterned. "The same people that helped them did ours. We just asked Mike [Heika] if he would re-write some of the stuff and fill in the blanks here and there."

A Michigan guy [Heika] helped pattern something Stars related after something the Red Wings organization did? This either has parallel to Jim Nill and the Stars, is ironic given the Stars' futility against the Wings for years and the younger brother complex we developed as a fanbase over the 90's and 2000's, or some measure of both...

But it really doesn't matter, because this is chock-full of old memories like this... 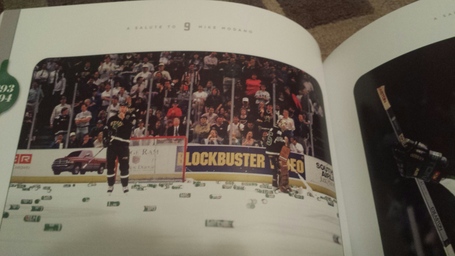 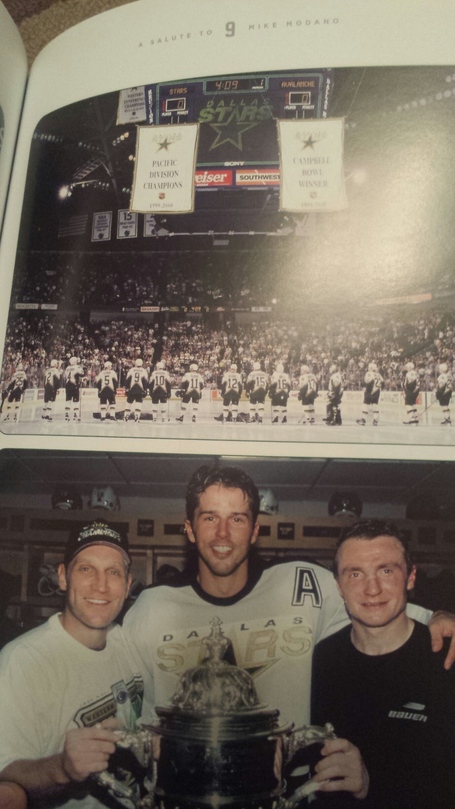 Jamie Benn and Tyler Seguin are threatening to comprise one of the most dangerous lines in Dallas Stars history. Those guys above might have something to say about that. They were pretty damn good, though short-lived.

It's a neat trip through Stars history. If you have the means, I highly recommend it.