Share All sharing options for: For Lindy, A Statistical Recap of Vancouver at Dallas 03/06/2014

I think this is easily my favorite game of the season. The Stars drilled the Canucks 6-1 on the strength of a Tyler Seguin hat trick.

There was the cowboy ref:

Then, there was sad Ryan Kesler:

Roberto Luongo openly taunted the Canucks on Twitter. First he was holding a good thought for new Canucks number one netminder Eddie Lack:

Then he just started piling on:

If I was still the back up I coulda came in and mopped this game up nicely.....

I'd put Thing 4 in for the 3rd period

There was also a slightly insane second intermission interview, but in the interest of taste and courtesy I won't link it here. It shouldn't have happened, but as an outside observer it was pretty funny.

They also played hockey. The Stars played it at a much higher level. At the end of one the Stars were in the middle of a five minute major powerplay thanks to Zack Kassian's unintelligent hit on Brenden Dillon while already enjoying a 3-0 lead. This game was never close. The Canucks sit right behind the Stars in the playoff race yet couldn't muster up any effort resembling an NHL franchise. I would say they should be embarrassed, but, as evidenced by that Kesler gif, they looked way too demoralized from the first faceoff to be embarrassed. That goose is cooked.

The visual of the game is going to make it appear closer than it really was, but your eyes didn't deceive you. The Stars were clearly the Alpha male.

Extraskater has made some tweaks. They now offer the option of an Even Strength Fenwick chart. You can expect to see only the Even Strength chart in this space going forward. 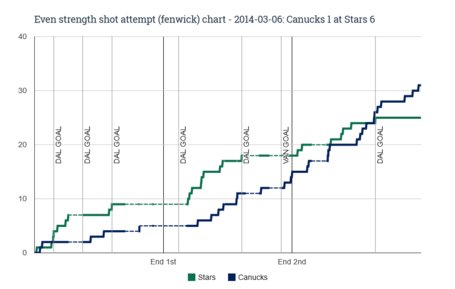 The Canucks fought back a bit after the fourth goal against, but all it got them was a 5-1 deficit at end end of two periods. The game just sort of ended 20 minutes later.

CF, CA, and CF% are Corsi For, Corsi Against, and Corsi For Percentage. The next statistics follow the same pattern. F is Fenwick, S is shots, and SC is scoring chances. All numbers are at even strength.

Given that the Stars only allowed one even strength chance, we get to see the random yet fun column with virtually all zeros. Shame on Jamie Benn, Rich Peverley, Tyler Seguin, Sergei Gonchar, and Kevin Connauton for being on the ice for the chance against.

The Canucks are more than talented enough to right the ship quickly. They sure looked done tonight though. If they keep sinking the Dallas playoff odds will continue to rise. Playoff races are fun, but after five years without playoff hockey I'm really not opposed to every team fighting against the Stars falling off the pace in a big way.

It wouldn't hurt if the Stars could drill Matt Moulson and the Minnesota Wild on Saturday either.