For Lindy, A Statistical Recap of Buffalo at Dallas

Dallas Stars drill the Sabres in all facets.

Share All sharing options for: For Lindy, A Statistical Recap of Buffalo at Dallas

The Dallas Stars hosted what passes for the Buffalo Sabres a few hours ago. I would call them the Buffalo Sabres, but given that a quarter of the lineup is likely to be traded this week I wanted to be fair to those who will remain. So, what passed for the Sabres attempted to hurt the Stars playoff chances.

The Stars won 3-2. Oddly enough they were led by a dominant powerplay effort. The Stars were the better team at extra strength too. Don't get me wrong, please. But, the powerplay was otherworldly.

Extraskater has made some tweaks. They now offer the option of an Even Strength Fenwick chart. You can expect to see only the Even Strength chart in this space going forward. The chart is presented without much comment below: 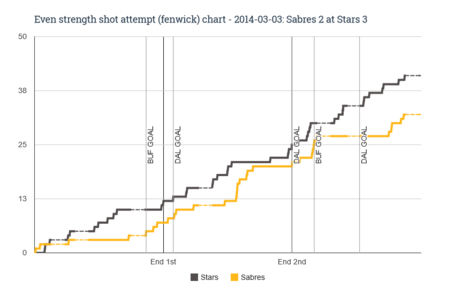 The Stars were pretty clearly better. At this point if the Stars aren't demonstrably better than a team like the Sabres there is an issue.

CF, CA, and CF% are Corsi For, Corsi Against, and Corsi For Percentage. The next statistics follow the same pattern. F is Fenwick, S is shots, and SC is scoring chances. All numbers are at even strength.

Los Estrellas were a 57% Corsi team at even strength, a 56% Fenwick team, a 56% shooting team, and a 58% scoring chance team. If you include the powerplay the Stars were plus eight in chances against a bad Sabres team. This includes a stretch early in the third period where the Stars forgot to play and the Sabres rattled off five unbroken chances in a row. Clean that stretch up and this game isn't even a contest.

At even strength the top players were Kevin Connauton (+5), Sergei Gonchar (+5), and Erik Cole (+4). A handful of players, including Alex Chiasson, were negative at evens.

Chiasson was dominant on the powerplay though. When the manpower was anything other than five on five Chiasson and company were plus five chances. In all situations he finished the night plus three. He was very effective down low on the powerplay and played a key role in the victory. He easily could have had three or four powerplay goals.

The better team won. When the deadline passes the Stars will be sitting in the 8th seed with 21 games to go. They stuck to their gameplan despite some moments of adversity. At times this game seemed closer than it needed to be. It prompted tweets like this:

Lost in the Corsi fun and stats, we sometimes forget that bodies + pucks / traffic = goals. Easy to forget. Not all shots are equal.

This is precisely why we track Scoring Chances. Often they show the same picture as shots, but sometimes they don't. Goal scorers can often have mediocre Corsi's because they are indeed looking for shots they want, but NHL rosters aren't chock full of elite goal scoring forwards. A strong Corsi suggests that a given team has the puck. Scoring chances attempt to show the quality of the shots generated. In this case both measures paint the same picture, and thus the Stars picked up a well deserved two points.