The Dallas Stars are back in the driver's seat for the second wild card playoff spot after sweeping the weekend back-to-back.

Share All sharing options for: Dallas Stars Firmly In Control of Their Playoff Fate After Back-to-Back Wins

Has it ever felt so good to not occupy a playoff spot, Dallas Stars fans?

With the Coyotes leading Minnesota 1-0 late last night and the Blues scoring that power play goal early in the third period it looked like things were sliding the wrong way. If Phoenix ended the night at 86 and the Stars were left at 81 this is a pretty dark Sunday, but it didn't go down like that, and Antoine Roussel's breakaway goal delivered exaltation while the Wild dealt devastation in Arizona.

The St. Louis Blues have lost just six in regulation at home and ten overall- The Dallas Stars now account for two of those, having beaten them in overtime earlier this month before handling them nearly from start to finish last night in a 4-2 victory.

Two wins in St. Louis. It counter-points two losses to the New York Islanders quite nicely, wouldn't you say?

Sportsclubstats.com thought so much of the combined Stars win and Phoenix loss that it lessened the Coyotes' mathematical chances in their calculations by 25.2% on a single night, and Dallas goes back in front. Until the next set of games, and these numbers continue swaying wildly.

The swings are almost too much to take, and I said as much on Twitter last night, paraphrasing a quote from the cult classic "Rounders"-

"A brilliant player can get a strong hand cracked, go on tilt...and lose his mind along with every single chip in front of him. This is why the World Series of Poker is decided over a No-Limit Hold 'Em table. Some people, pros even, won't play No-Limit. They can't handle the swings."

The Stars had a strong hand cracked by Calgary, losing a 3-1 third-period lead and nearly lost every single chip in front of them in the week that followed.

Handling the swings is what we find ourselves trying to do now. Fortunately we have some experience in this area. Unfortunately we know where we expect things to end up based on those experiences. All of this, after all, has happened before, and it will all happen again. 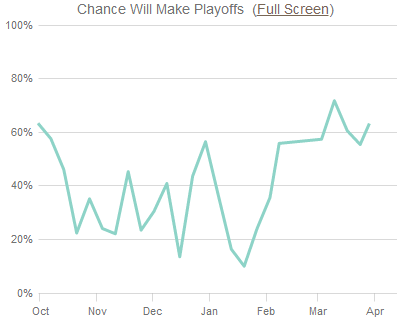 Consider the events of this chart through the high-water mark there in mid-March.

In early November the Stars climbed a little. Then fell a little more. Climbed further, then fell down again. Then peaked on New Years Eve, then fell lower than ever before. Climbed higher than ever, fell down to a season low, and then built themselves back up a fifth time.

Roller coaster? Oh yes. And the amplitude of the wave grows each time. The drama grows each time- Apt to leave the outcome as memorable as it is (usually) devastating.

But the graphic offers hope, and a possibility that this time can be different. If they stand. If they are true to their system. If they can get that dang illness out of the locker room.

The latest peak looked like it would be followed (loss at Chicago, loss at Winnipeg, loss at Pittsburgh) with another devastating and irreconcilable valley that put their goal out of reach. Instead they've rebounded nicely with a couple of victories against competition with which they've struggled mightily this season- The Central Division.

If that's a portent of things to come then optimism may be in order- Because the Stars have to now face down another season-long demon: The Eastern Conference. Dallas remains the worst in the West against the East, and by a pretty significant margin, being the only Western Conference team with a losing intra-conference record.

They'll take a walk through what used to be the southeast division coming up, starting with the Capitals on Tuesday. The Hurricanes, Lightning, and a back-to-back with the Panthers follow before returning home.

Five of their eight games are against the East. They simply must figure that out.

For now it's two days off for Phoenix and Dallas both. The Stars must face a similarly desperate Washington Capitals team Tuesday, fighting for wild card #2 in the East, while Phoenix gets the hapless Jets at home before taking on the Kings at Staples Center the night after.

Hope is very much alive. With an extra game to play and the finale versus Phoenix themselves, the Stars are the drivers seat. Today.