In which the NHL tries out the novel idea of a hockey game played in a football stadium, Brent Seabrook turns traitor, and all the Bolts' Corsi are belong to us, and a fat lot of good it did...

Big news of yesterday? I suppose it would be the final Stadium Series game of this season. Is that still news? *shrugs*

Anyway, the weather came to play in Chicago, even if the Pittsburgh Penguins didn't. The Blackhawks dismantled the Penguins last night in a snowy Soldier Field by a tune of 5-1. Or 6-0 really, considering Brent Seabrook scored the only goal for the Pens. Seriously, how freaking stoked must Seabrook have been to find himself unmarked on the backdoor? Only to realize a moment later he'd slammed in the rebound past his own goaltender.

I guess that's what happens when the best athletes participate in the best league and... actually no. I don't get it either. *shrugs*

Anyway. The big news of yesterday if you're a Stars fan is that Dallas absolutely dominated Tampa Bay during their matinee, for two periods anyway, and yet came away with nothing but a punch in the gut. I'm not even all that disappointed. Or upset. I'm just confused.

I mean, how did the Stars do it? Again? Their record breaking umm... record when taking 40 or more shots in a game fell to 1-5-3. I'm not certain that's actually a record, but it's definitely remarkable. In the terrible kind of way. Especially since that shot total wasn't a mirage. Here's the possession chart from Extra Skater. 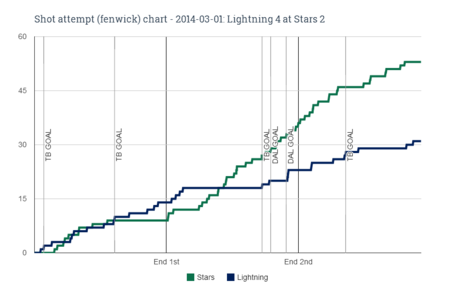 53 to 31 for total shots generated (including missed shots), in favor of the Stars. Add in the shots that were blocked and the total attempts end up as 78 for the Stars... and 40 for the Lightning.

So where did it all go wrong? Well those blocked shots certainly factored in. 25 shots blocked by the Lightning is far from insignificant and illustrates how well they as a defense were able to close down lanes and take away opportunities. As opposed to the Stars, who, in a spirit of fairness and playing nice with others, gifted the Lightning with multiple opportunities to redress the possession balance. Unfortunately, the Lightning seemed to capitalize on all their opportunities. Martin St. Louis recorded two shots in the game. Both of those shots went in. Tyler Seguin had seven shots on goal. Seven. None of those went in.

In the immortal words of Kurt Vonnegut, "So it goes..."

If you can bear it, here are the recaps from yesterday's game. [Stars Inside Edge] [Sports Day DFW] [NHL.com]

Think this had anything to do with the Stars loss yesterday? Brenden Dillon is day-to-day with the dreaded 'lower-body injury.' [Stars Inside Edge]

I love this one. Alex Ovechkin gets a little creative with the puck in a game against the Bruins. Typically though, that wanker Brad Marchand has to go in and ruin all the fun. [Russian Machine Never Breaks]

Bit of a milestone for Jaromir Jagr yesterday... [CBC Sports]

Now, try not to cry too hard when I remind you of this, but today's Heritage Classic, between the Vancouver Canucks and Ottawa Senators, is to be the last outdoor game of this season. Yep. The first twelfty million outdoor games are in the books and it all wraps up today. [NHL.com]

Oh, and just because everybody might be bored of outdoor games already and not tune in, the Canucks threw this out there, just to get us all interested again: Eddie Lack will start in place of Roberto Luongo. How I'd missed Vancouver goalie controversy! [Pass it to Bulis]

And lastly, Jonathan Toews can't block a shot, but he can make a wish come true. Aww...