The Dallas Stars are looking to get back to their system and execution after a few rough outings. Tyler Seguin joined BaDD radio to talk about where the team is at right now.

Tyler Seguin knows about winning. He's already won the Stanley Cup and been to the Stanley Cup Finals twice in his budding NHL career. That kind of experience will help lead this team through their current little skid.

Appearing on his weekly time slot with BaDD radio on The Ticket in Dallas, Seguin summed up this team quite poignantly when he pointed out that they've put themselves in a good spot after a very rough January -- which should give us all hope that they can pull out of it again. "After that January spell there, we earned our way back into the playoffs picture and we're still right there. We're not going to dwell on two games or anything like that, but with 14 games left, you have to get things going."

By 'get things going' I believe he means the offensive side of the game, where Dallas has experienced a dry spell recently. They've scored only three goals in their last seven periods of play. Seguin has had his own issues with scoring, missing on several prime chances. "It's definitely frustrating. I think it started all in the Calgary game. I look at myself. We were up 3-1, I had a breakaway, I shot 5-hole and I missed, and it seems like [since] then, it's been a downward spiral."

Seguin isn't the only one to have opportunities at offense squeak by him. Cody Eakin, Jamie Benn, Valeri Nichushkin, Alex Goligoski, Alex Chiasson and Erik Cole have all had good looks. Nothing just seems to be going in for them right now. The team as a whole has hit a bad stretch of puck luck, as demonstrated by this lovely graphic from ExtraSkater.com, which shows the PDO of the team (a metric used to help measure 'luck') hasn't been all that great lately: 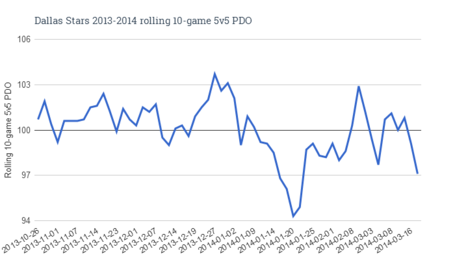 While Seguin hasn't been a part of those teams that have missed the playoffs for Dallas for five years running, he's been made aware of the past's shortcomings. And he's not accepting that history will repeat itself. "We want to establish that we're a different team than the past, and we're going to do everything possible to get into that last playoff spot."

He also left Stars fans with one simple request: "If I was talking to a fan right now, I'd say stick with us."

This team has shown that they can pull off feats nobody expected of them before, already exceeding many pundits' expectations for the year. Maybe, just maybe, they can do it again. So stick with them, ladies and gents. I promise it will be entertaining til the last second of hockey is played this season -- no matter what month of the calendar that second is played in.