Only one month remains in the race for the post season. What will it take for the Stars to continue playing past the second week of April?

[Ed. note: This was written early last week, before the games against the Flames and Jets, but the numbers still basically bear out.]

Over the course of 66 games this season, fans of the Dallas Stars have watched this team steadily improve.

Given the amount of roster turnover, it came as no surprise when play on the ice would sometimes turn messy. The defensive pairings were new, the top two forwards on the team traded positions, and all the players were still trying to get to know each other and their tendencies. Don't forget to throw in a new head coach and a new style of play.

It made for some interesting nights to say the least.

Now, though, it appears as though things are finally starting to click. As Derek has already mentioned, the locker room is coming together in a way that hasn't been seen for years in Dallas. The (...sigh...) intangibles are there, and now the team is in a good position to make the post season for the first time in years.

We can't predict how this team will finish. They are a young team still learning, the #1 netminder is injured, and the emotions experienced over the last week is enough to make anyone wonder what's going to happen next.

There are a lot of variables, and we don't yet know how they will all play out. But there is one advantage set in stone that we can point to right now. Something that may help give the Stars the slightest of edges over the other teams in the race for a wild card spot. It's also an advantage that the Stars have not had in quite a long time.

With 16 games to play, the Dallas Stars have the easiest schedule of any team in the wild card race. Here's a look at the remaining schedules for the Stars and the other teams in the wild card race: (Colors indicate home games. The rank is the league standings through 3/12/14.) 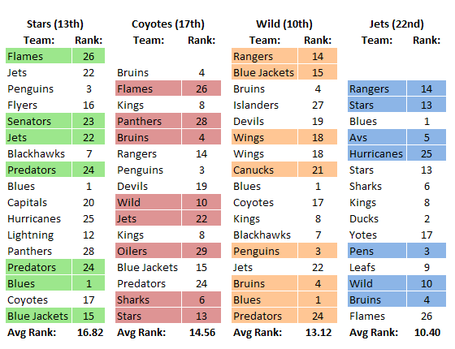 You can strike off the top game on each of these schedules, since they were played on Thursday and Friday. However, the average rank of schedule does not change significantly.

Despite the fact that the Winnipeg Jets trail the Stars by six points, have played two additional games, and have another team besides Dallas standing between them and the playoffs, I went ahead and included them. I have read a few comments recently about people worried about the Jets making a push.

I think it's pretty safe to get rid of those fears. Besides all of the disadvantages I just listed, they also have by far the hardest schedule of the four teams. Only 2 of their remaining 14 games are against the bottom third of the league. 60% are against the top 10. If I were a Jets fan, I'd start turning my attention to the draft now.

With the second hardest schedule, the Minnesota Wild look just a tad more vulnerable. They have four games against teams in the bottom third of the league. All of the other games on their schedule are against teams smack in the middle of the playoff race. They will undoubtedly be playing some tight games over the next few weeks, and it's possible that they could slip just enough for the Stars to catch them.

The Phoenix Coyotes have held most of the attention for Stars fans lately, and rightfully so. Five games against the bottom third of the league, and six others against Eastern Conference teams. They should give the Stars a good chase, especially over their final five games. Let's not forget their final game of the season is against Dallas at home. It's almost like the NHL schedule-makers knew what was going to happen.

However, there is great news for the Stars. Out of the three (four if you really want to include the Jets) teams in the race, the Stars are the only one whose opponents average out to the bottom half of the league. Dallas still has 8 of 16 games remaining against the bottom third of the league -- half the schedule! There are only four games against teams in the top 10, and two of those are against the Blues.

If the Stars were to take care of business by beating only the teams worse than them, they would finish 11-5 to end the season. That would be more than enough to get them into the playoffs. The Stars might even benefit from how their schedule ends. The final* home game against the Blues may only have an impact on one team -- Dallas. The Blues are still surging, while the Ducks regress. If they lock up the #1 seed in the playoffs by April 11th, they could be resting some key players in preparation for the playoffs.

Strangely enough, having the postponed game against the Columbus Blue Jackets moved to the end of the season could be beneficial as well. (An official date has still not been set, but it sounds more and more like this will be the case.) Their playoff fate may be fixed before the game is replayed, and they could choose to rest their team for the playoffs. It's too early to tell how these situations play out, but it is certainly plausible.

In the end, the strength of schedule should only be serving as an added benefit. If the Stars continue to play the way that they have since the end of January, checking to see who Phoenix plays next won't even be a concern. The Stars have a great opportunity to work their way to game #83. Now let's see if they can take advantage of it.